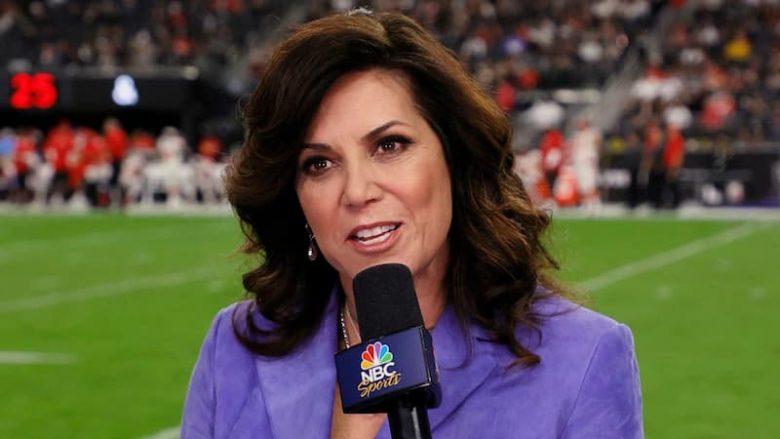 This article will answer every question you have about Michele Tafoya. Below are some of the frequently asked questions about her.

Who is Michele Tafoya?

How Old is Michele Tafoya?

Michele is 57 years old as of February 2022 having been born on December 17, 1964, in Manhattan Beach, California, U.S. She shares her birthdate with celebrities such as Cora Tilley, Ian Jeffrey, Manu Ríos, Josie Alesia, Sarah Paulson, and many more.

Who are Michele Tafoya’s Parents?

She was born to Orlando Tafoya (Father) her father was a huge fan of sports and also a civil engineer. And Wima Conley Tafoya (Mother)worked as a teacher in South Bay Union High School.

Does Michele Tafoya have any Siblings?

Michele has three siblings namely, Margaret, who is one of the personnel offices of former President Barack Obama’s administration. Geraci owns a design and architecture business in Manhattan beach. Her brother Mathew owns a door and cabinet company in Lawndale.

Tafoya is joyfully married to the love of her life, Mark Vandersall whom they met in 1993 and dated for seven years and later got married in 2000.

Tafoya together with her husband Mark has a son and a daughter. Tyler Vandershall was born on November 21, 2005, and they adopted a newborn daughter by the name of Olivia Vandershall in 2009.

Tafoya worked as a reporter and a host for KFAN-AM in Minneapolis. She worked primarily for Minnesota Vikings and University of Minnesota women’s basketball broadcasts. In Charlotte, she worked for WAQS-AM where she went by the name Mickey Conley. Serving as a Minnesota Timberwolves host and sideline reporter, Tafoya also worked for the Midwest Sports Channel, as well as a play-by-play commentator for women’s Big Ten basketball and volleyball. Michele spent three years as a reporter and sports anchor at WCCO-TV in Minneapolis.

A Career at CBS Sports

In September 1994, Tafoya joined CBS as a host and reporter for the CBS Television Network sports anthology show CBS Sports Spectacular and college basketball. At the 1994 U.S. Open Tennis Championship, Michele made her on-air debut. She was then honored with a Gracie Award in 1997 by The American Women in Radio and Television. After spending five years with the network, Tafoya left CBS at the end of 1999.

A Career at ABC Sports and ESPN

In January 2000, Michele joined ABC Sports and ESPN. There she was working as a sideline reporter for ESPN Monday Night Football beginning in the 2006 NFL Season. During the 2004 and 2005 NFL seasons, Tafoya worked as a sideline reporter for ABC Sports’ Monday Night Football. Tafoya was loaned to NBC Sports as a reporter for Rhythmic Gymnastics for the 2000 Sydney Olympics and as the play-by-play woman for softball. Tafoya was ranked among the most likable TV sports personalities including Biggest Trend-Setter in 2006 by the Davie-Brown Index. She left ESPN at the end of the 2010-2011 NFL season to go to NBC Sports.

A Career at NBC Sports

Michele was announced as the new sideline reporter for NBC Sunday Night Football on May 4, 2011. Thereby replacing Andrea Kremer and rejoining former announcer and co-worker, Al Michaels. She also did coverages of swimming during the Summer Olympics for NBC. Following the 2021 season, Tafoya would leave Sunday Night Football on her own decision as reported by Andrew Marchand of the New York Post. NBC had declined comment while Michele could not be immediately reached. NBC later confirmed in a press release on January 11, 2022, that Tafoya would leave the network to pursue other opportunities with Super Bowl LVI as her final assignment for NBC.

A day after her departure from NBC Sports on February 14, 2022, Republican Minnesota gubernatorial candidate Kendall Qualls announced Michele would be joining his campaign as co-chair.

Michele Tafoya’s Salary and Net Worth