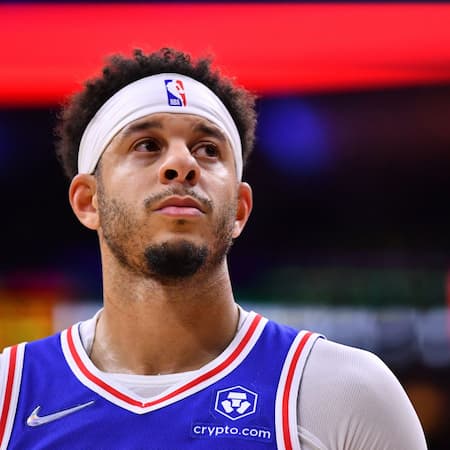 This article will answer every question you have about Seth Curry. Below are some of the frequently asked questions about him.

Who is Seth Curry?

Seth Adham Curry is also known as Seth Curry is a prominent American basketball player. He plays for the Brooklyn Nets of the NBA (National Basketball Association).

Seth is the younger brother of NBA player Stephen Curry and a son to the former NBA player Dell Curry. He currently has the fifth-highest career three-point field goal percentage in NBA history.

How Old is Seth Curry?

Who are Seth Curry’s Parents?

He was born to Dell Curry (Father) his father is a former NBA player and he played for the Charlotte Hornets. And Sonya Curry (Mother) is a former Virginia Tech women’s volleyball player.

Does Seth Curry have any Siblings?

Seth has two siblings, a brother, and a sister. His elder brother Stephen Curry was born on March 14, 1988, he is an NBA player for the Golden State Warriors. And his younger sister Sydel Curry born on October 20, 1994, is a former college volleyball player for the Elon Phoenix women’s volleyball team of the CAA Conference.

Curry received his high school education at Charlotte Christian School and graduated in 2008. He then enrolled at Liberty University from 2008 to 2009 and later transferred to Duke University from 2010 to 2013.

He is currently married to Callie Rivers. They married in 2019. his wife is a former professional American volleyball player.

Seth chose to attend Liberty University after high school. Seth wore the jersey number 30 at Liberty the same number as his dad and older brother wore in their careers. Curry broke the Big South Conference single-season scoring record for a freshman.

After the 2008-09 season, Seth transferred from Liberty University to Duke. There he also wore the family’s number “30”. On February 9, 2011, Curry scored a season-high 22 points against North Carolina. And on December 29, 2012, against Santa Clara, he scored a career-high 31.

In the 2013 NBA draft, Seth went undrafted. He signed a non-guaranteed contract with the Golden State Warriors on August 23, 2013. Curry was acquired by the Santa Cruz Warriors of the NBA Development League as an affiliate player on November 1, 2013.

Seth signed with the Memphis Grizzlies on December 24. He then made his NBA debut and was waived by the Grizzlies on January 5, 2014.

After four days, Seth was reacquired by the Santa Cruz Warriors. He was then named to the Futures All-Star roster on February 3, 2014, for the 2014 NBA D-League All-Star Game.

A career at Cleveland Cavaliers

Seth signed a 10-day contract with the Cleveland Cavaliers on March 21, 2014. He then appeared in his second NBA game against the Houston Rockets recording three points in nine minutes of action. Curry returned to Santa Cruz after the Cavaliers decided not to offer him another 10-day contract.

Curry joined the Orlando Magic for the Orlando Summer League in July 2014 and the Phoenix Suns for the Las Vegas Summer League. Seth’s D-League rights were acquired by the Magic’s affiliated team the Erie BayHawks on October 7, 2014. Curry scored 23 points on 9-of-24 shooting in a win over the Idaho Stampede in his debut for Erie. He was then named to the Futures Al-Star team for the 2015 NBA D-League All-Star Game on February 4, 2015, for the second time in his career.

Following the expiration of his 10-day contract on March 21 he was not offered a second contract. Seth then returned to the Erie BayHawks. Upon his return to Erie, he averaged 23.8 points, 3.9 rebounds, 4.2 assists, and 1.4 steals per game.

Seth joined the New Orleans Pelicans in July 2015 for the 2015 NBA Summer League. He earned all first honors in the NBA Summer League. Seth then signed a $2 million two-year guaranteed deal with the Sacramento Kings on July 22. He made his first debut for the kings in a 132-114 win over the Los Angeles Lakers. In order to become a free agent after the 2015-16 season, Seth refused his $1 million player option for the 2016-17 season. On July 3, 2016, Seth was a free agent.

Seth signed with the Dallas Mavericks on July 15, 2016. On October 26, Curry made his debut for the Mavericks in their season opener against the Indiana Pacers. In a 109-97 win over the Los Angeles Lakers on November 8, Seth scored a career-high 23 points. Following a right knee sprain, Curry missed four games in early December. Upon his return from the knee sprain, he had career highs of 24 points in a 105-101 win over San Antonio on January 29, 2017. After being diagnosed with a stress reaction of his left tibia on October 7, 2017, Seth was ruled out indefinitely. And was ruled out for the entire season on February 6, 2018, after it was determined he required surgery on his left tibia.

Seth signed a two-year contract with the Portland Trail Blazers on July 6, 2018, which included a player option for the second year. He made his debut with the Blazers on January 26, 2019, in a 120-111 win over the Atlanta Hawks. Seth was then selected to compete in the Three-Point Contest during All-Star Weekend on February 5. At the 2019 NBA Playoffs with the Blazers, Curry made it to the Western Conference Finals. There he faced his brother Steph and the Golden State Warriors who knocked them out of the playoffs.

Seth was traded to the Philadelphia 76ers on November 18, 2020, in exchange for Josh Richardson and the drafts rights to Tyler Bey. During the second round of the playoffs on June 16, 2021, Seth recorded a new playoff career-high of 36 points.

A career at Brooklyn Nets 2022-Present

Seth was traded along with Andre Drummond, Ben Simmons, and two future first-round pick on February 10, 2022, to the Brooklyn Nets in exchange for Paul Millsap and James Harden.

Seth Curry’s Salary and Net Worth

Curry being a well-known basketball player, has a salary of $8.208m million as of 2022 and a net worth of around $4 million.