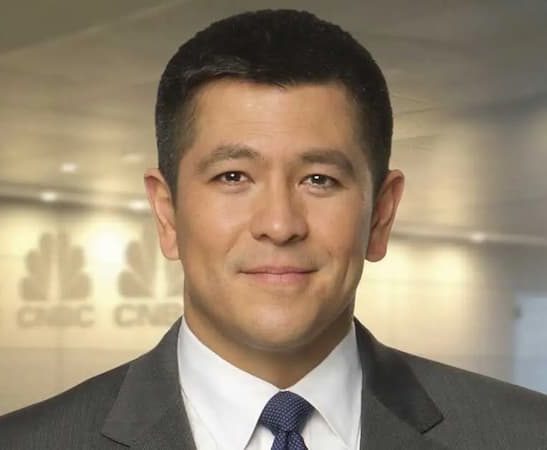 This article will answer every question you have about Carl Quintanilla. Below are some of the frequently asked questions about him.

Who is Carl Quintanilla?

Carl Quintanilla is a famous American journalist anchor and co-anchor of Squawk Alley and Squawk on the Street, morning programs on CNBC. Prior to joining CNBC, he served as a staff reporter for The Wall Street Journal between 1994 to 1999.

During his tenure there, Quintanilla authored full-time for the Chicago bureau covering manufacturing, airlines, and economic issues. Additionally, he wrote a weekly column on workplace issues and on-the-job trends for the newspaper’s front page.

Between 1999 and 2002, Quintanilla worked as a correspondent for numerous CNBC programs. They include Business Center as well as a special correspondent for Fox X-press on Fox News. He co-anchored Wake Up Call, CNBC’s early-morning program.

How Old Is Curl Quintanilla?

Quintanilla was born on the 10th of September 1970 in Midland, Michigan. He is 51 years of age as of 2022. Carl shares his birthday with celebrities such as Joe Perry, Jose Felician, Chris Columbus, Ryan Phillippe, and Colin Firth, among others.

Who Are Curl Quintanilla’s Parents?

Quintanilla’s secretive nature has shown up in his personal life. He has managed to keep his family background very private. In case there is news regarding Quintanilla’s parents and siblings, we shall update it here as soon as possible.

After graduating from high school, Quintanilla enrolled at the University of Colorado Boulder and graduated in 1993 with a Bachelor of Arts degree in political science.

Quintanilla tied knots with the love of his life, Judy Chung in 2005. Judy is a former TV producer currently serving at Ralph Lauren as a product manager. The couple is blessed with two daughters, Ava Jane and Lily Anna. They live in Bridgehampton, New York, in a house they acquired for $3.2 million in 2017.

How Tall Is Carl Quintanilla?

Adding to his well-built body, Quintanilla stands at a height of 1.75 meters.

Quintanilla began co-anchoring Squawk Box on 19th December 2005. The show is co-hosted by Becky Quick, Joe Kernen, and Andrew Ross Sorkin. He traveled to China in 2007 for the coverage of McDonald’s efforts in the country for CNBC’s documentary Big Mac: Inside the McDonald’s Empire.

Jon Stewart berated Carl alongside other journalists in the aftermath of the financial crisis of 2007–2008 for failure to predict the downturn and ask tough questions of Wall Street executives.

Quintanilla left Squawk Box in July 2011 and joined Squawk on the Street. He joined HBO Real Sports in June 2014 as a correspondent. In January 2015, he presented a story on Stephon Marbury.

Quintanilla was among the moderators of the third of the 2016 Republican Party presidential debates and forums on 28th October 2015. However, along with his CNBC co-moderators, they were criticized for being rude to the candidates.

Quintanilla is a recipient of numerous awards including an Edward R. Murrow Award, an Emmy Award, and a Peabody Award for his coverage of Hurricane Katrina in 2005.

Carl Quintanilla’s Salary and Net Worth

Quintanilla earns an annual salary of $3 million. He has accumulated an estimated net worth of $9 million in his career.