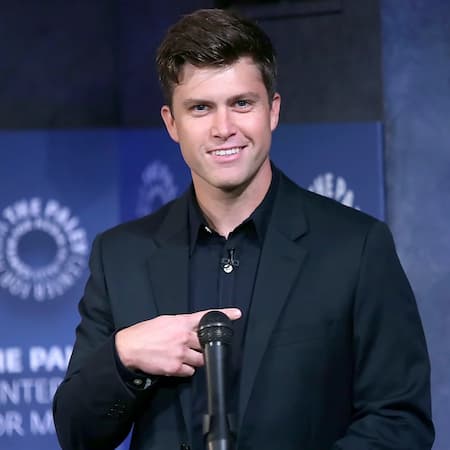 This article will answer every question you have about colin Jost. Below are some of the frequently asked questions about him.

Who is Colin Jost?

How Old is Colin Jost?

Jost is 39 years old as of February 2022, having been on June 29, 1982, in New York City, U.S. Colin shares his birthdate with celebrities such as Camila Mendes, SmallishBeans, Zion Kuwonu, Nicole Scherzinger, Dom Zeglaitis, and many more.

Who are Colin Jost’s Parents

Jost was born to Daniel A. Jost (Father) he is a former teacher at Staten Island Technical High School, and Kerry J. Kelly (Mother) was the chief medical officer for the New York City Fire Department.

Does Colin Jost have any Siblings?

Colin is the elder of two sons. He has a younger brother Casey Jost born on June 17, 1985. His brother is a writer and producer for the hidden camera show Impractical Jokers.

He is currently married to Scarlett Johansson since 25th October 2020. Despite being married, Jost has been in a relationship with Rashida Jones (2013-2016).

Jost has a son named Cosmo Jost born on August 2021.

Colin worked as a copy editor and reporter for the Staten Island Advance after graduating. For a short-lived Nickelodeon animated show, Kappa Mikey Jost was then hired as a writer. After leaving that job he sent in a Writing packet to NBC’s Saturday Night Live. They then gave him a writing position in 2005. Colin was SNL’s writing supervisor from 2009 to 2012. From 2012 to 2015 he was the co-head writer and regained that status in late 2017. On March 1, 2014, Jost replaced Seth Meyers and became the weekend update co-anchor. In addition to Weekend Update, Colin has portrayed Roger Goodell during the 2021 NFL season and his friend Pete Buttigieg during the 2020 Democratic Party presidential primaries. He has also worked in multiple roles related to comedy.

Jost has worked as a stand-up comedian appearing on HBO, TBS, and Late Night With Jimmy Fallon. In 2009, he was selected as “New Face” at the Just for Laughs festival in Montreal. Colin has also appeared at the Chicago Just for Laughs festival in 2011 and 2012 and again in the Montreal festival in 2010 and 2012. Colin opened for comedian Liam McEneaney’s album recording in January 2016 at The Bell House in Brooklyn. On the episode of WWE’s Monday Night Raw on March 4, 2019, Colin and Michael Che appeared and were both announced as special correspondents for Wrestlemania 35. Colin in July 2020 released a memoir entitled A very Punchable Face: A Memoir. The book appeared on the New York Times Bestseller List and was received well.

Colin Jost’s Salary and Net Worth