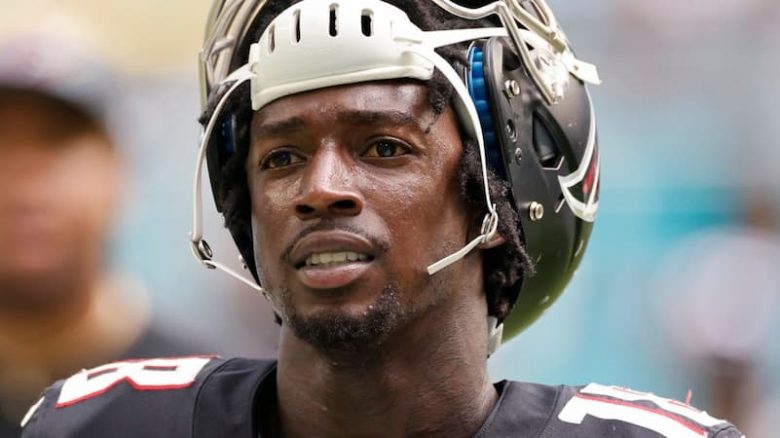 This article will answer every question you have about Calvin Ridley. Below are some of the frequently asked questions about him.

Who is Calvin Ridley?

Calvin Orin Ridley is a well-known American football wide receiver for the Atlanta Falcons of the NFL (National Football League). In college, he played at Alabama and was drafted by the Falcons in the first round of the 2018 NFL Draft

Ridley in the 2017 season started off strong with 7 receptions for 82 yards, and a touchdown in a 24-7 win over Florida State. Against Mississippi State on November 11, Calvin had 5 receptions for 171 receiving yards in the victory. It was then announced on January 10, 2018, that Ridley would forgo his senior year at Alabama in favor of the 2018 NFL Draft.

How Old is Calvin Ridley?

He is 27 years old as of March 2022, having been born on December 20, 1994, in Fort Lauderdale, Florida, U.S. Calvin shares his birthdate with celebrities such as;  Madison Nicole Fisher,  Mya Nicole Johnson,  Kylian Mbappé, Mariano Castano, JoJo, and many more.

Who are Calvin Ridley’s Parents?

He was born to Calvin Ridley (Father) and Kay Daniels (Mother)

Does Calvin Ridley have Siblings?

He has a younger brother by the name of Riley Ridley born on July 21, 1996. His brother is also an NFL wide receiver.

He is engaged to Dominique Fitchard. They engaged in February 2019.

He has a daughter with his girlfriend who was born in June 2020.

Calvin was drafted by the Atlanta Falcons in the first round with the 26th overall pick in the 2018 NFL Draft. He then signed a four-year deal worth $10.9 million on July 5, 2018, featuring a $6.1 million signing bonus.

Following a quiet NFL debut against the Philadelphia Eagles in Week 1, Ridley had 4 receptions for 64 yards and his first NFL touchdown in a 31-24 win over the Carolina Panthers. In week 3 on September 23, he scored 7 receptions for 146 yards and 3 touchdowns in a 43-37 overtime loss to the New Orleans Saints. Calvin was then named the Offensive Rookie of the Month for the month of September, for collecting 6 touchdown receptions, which was the most in the league, and tied an NFL record for a rookie in his first 4 games. Calvin finished the 2018 season leading all rookie wide receivers in receptions. This made him be named to PFWA All-Rookie Team thereby becoming the fourth Atalanta Falcons receiver to get this award, joining Shawn Collins (1989), Mike Pritchard (1991), and Julio Jones (2011).

In the 2019 season in week 1 against the Minnesota Vikings, Calvin caught 4 passes for 64 yards and the first receiving touchdown of the season as his team lost 12-28. Also in week 2, he caught 8 passes for 105 yards and a touchdown as the Falcons won 24-20 against the Philadelphia Eagles. Due to an abdominal injury, Ridley was ruled out for the rest of the season. He overall finished the 2019 season with 63 receptions for 866 receiving yards, and 7 receiving touchdowns.

The season started with Ridley recording a career-high nine receptions for 130 yards and two receiving touchdowns as the Falcons lost 25-38 against the Seattle Seahawks. Also in week 2, he caught 7 passes for 109 yards and 2 touchdowns during the 40-39 loss to the Dallas Cowboys. Even though his team lost, Ridley tied Andre Rison for the franchise record for the most receiving touchdowns in the team’s first two games of a season with four. He continued his early-season form recording 8 catches for 136 yards during the 23-16 loss against the Los Angeles Chargers. At the end of the season, Ridley was named to the Associated Press’ All-Pro 2nd Team for his performance during the 2020 season.

The Falcons exercised the fifth-year option on Ridley’s contract on May 3, 2021. The option guarantees a salary of $11.1 million for the 2022 season. However, Ridley on October 31 announced on Twitter that he was stepping away from football due to mental health reasons. He finished the season with 31 receptions for 281 receiving yards, and 2 receiving touchdowns.

On March 7, 2022, the NFL announced that Calvin would be suspended indefinitely at least at the conclusion of the 2022 season for betting on games in the previous season. And his base salary of $11. 1 million for 2022, was forfeited.

Calvin Ridley Salary and Net Worth

As of 2022, he had a base salary of $11.1 million, but his contract was canceled due to betting on NFL games. Ridley is estimated to have a net worth of $10 million.