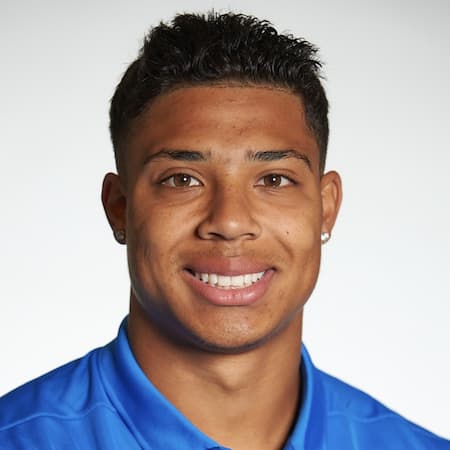 This article will answer every question you have about Zach Charbonnet. Below are some of the frequently asked questions about him.

Who is Zach Charbonnet?

Zach Charbonnet is a professional American football running back who plays for the UCLA Bruins. In 2019 and 2020, he played for the Michigan Wolverines. In January 2021, he entered the NCAA transfer portal. Moreover, he played high school football at Okas Christian School in California and was variously ranked as the No. 3, No. 4, or No. 6 running back prospect in the country.

How Old Is Zach Charbonnet?

Who are Zach Charbonnet Parents?

He was born to Mark (Father) and Seda (Mother). His father is African-American whereas his mother is part Cambodian, Chinese and French and immigrated to the United States from France.

Does Zach Charbonnet have Siblings?

He has two sisters by name Athen and Bella Hall.

He attended Oaks Christian School where he tallied 4,741 rushing yards and 62 total touchdowns. As a junior, he had 2,049 yards and 23 touchdowns.

He was rated among the top running back prospects in the country – ranked No. 3 by 246Sports.com, No. 4 by Rivals.com, and No. 6 by ESPN.com. Moreover, he was invited to play in 2019 Under Armour All-America Game. Before the start of his senior year of school, on June 23, 2018, he committed to play college football at the University of Michigan.

A Career at Michigan

Shortly after his enrollment in Michigan, he underwent knee surgery in January 2019. He then missed spring practice while recuperating but recovered by late summer. In Michigan’s 2019 season opener, he started as a running back. In the game, he totaled 99 yards, 90 rushing yards on eight carries, and nine receiving yards on two receptions. On September 7, in a game against Army had his first 100-yard rushing game and recorded three touchdowns.

On October 12, against Illinois, he had 108 running yards in the first half. And he went on to finish the game with 116 yards on 18 carries and a touchdown. In a game against Maryland on November 2, he recorded two touchdowns setting a Michigan program record for the most touchdowns by a freshman with 11. Overall, he concluded the 2019 season with 726 rushing yards and 11 touchdowns on 149 carries. During the 2020 season, he totaled 124 yards and one touchdown on 19 carries. In January 2021, he announced his intent to transfer and enter the NCAA transfer portal.

A Career at UCLA

He announced on January 30, 2021, his intention to transfer to the University of California, Los Angeles. During the 2021 season, he and Brittain Brown shared the Bruins’ rushing duties in a two-back system. With Brown out injured against USC, he had season highs of 28 carries and 167 yards while surpassing the 1,000-yard milestone for the season. Overall, he finished with 1,137 yards rushing and 13 touchdowns, finishing second in the conference in rushing yards per game with 94.8 behind B.J. Baylor of Oregon State. He then announced on January 14, 2022, that he would return to UCLA in 2022 for his senior season. On October 8, he rushed for a career-high 198 yards and a touchdown on 22 carries in a 42-32 win over No. 11 Utah. Throughout the first six games of the 2022 season, he went on and led UCLA with 615 yards and six touchdowns.

Zach Charbonnet’s Salary and Net Worth