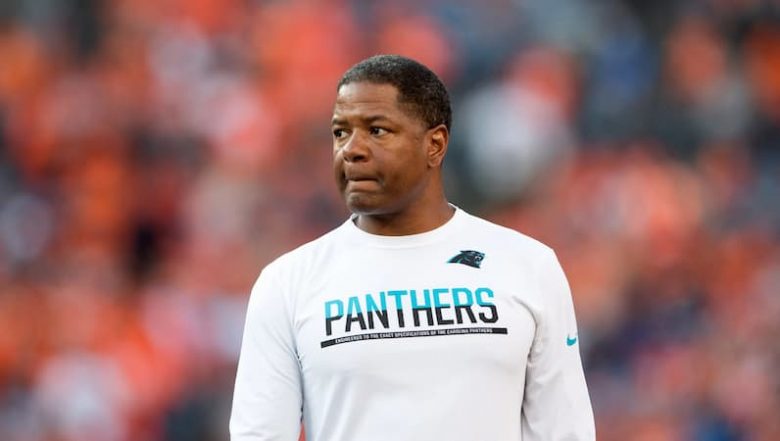 This article will answer every question you have about Steve Wilks. Below are some of the frequently asked questions about him.

Who is Steve Wilks?

Steven Bernard Wilks abbreviated as Steve Wilks is an American football coach and former player who is the interim head coach for the Carolina Panthers of the NFL (National Football League). Previously, he served as the head coach for the Arizona Cardinals for one season but was fired after a 3-13 record. Also, he spent time as defensive backs coach for the Chicago Bears and San Diego Chargers, and as defensive coordinator for the Carolina Panthers and Cleveland Browns, and Missouri. He is a two-time NFC Champion winning with the Bears in 2006 and with the Panthers in 2015, losing the Super Bowl to Peyton Manning-led teams on both occasions.

How Old Is Steve Wilks?

He is 53 years old as of November 2022, having been born on August 8, 1969, in Charlotte, North Carolina, U.S. Steve shares his birthdate with celebrities such as; Shawn Mendes, Jentzen Ramirez, Corpse Husband, MightyDuck, Heaven King, and many more.

Who are Steve Wilks’s Parents and Siblings?

He received his education at Appalachian State University where he earned his bachelor’s degree in communications in 1991.

He is married to the love of his life Marcia Wilks.

He and his wife Marcia have three kids. Two daughters by the name Marissa and Melanni, and a son by the name Steven James.

From 1987 to 1991, he played defensive back at Appalachian State. He then played for one year in the AFL for the Charlotte Rage as a wide receiver, defensive back, and kick returner.

For one season, he served as Head Football Coach at Savannah State College (1999) and compiled a record of 5-6.

A Career at Chicago Bears

On February 16, 2006, he was hired by the Chicago Bears as a defensive back. The Bears then announced on December 30, 2008, that they had fired Wilks.

A Career with the San Diego Chargers

He was not unemployed for long. However, he was hired as defensive backs coach of the San Diego Chargers in 2009 when former Bears defensive coordinator Ron Rivera moved to the same position in San Diego.

A Career with Carolina Panthers

When Rivera became head coach of the Panthers, on January 15, 2012, he hired Steve as secondary coach. In 2015, he was promoted to assistant head coach. Moreover, he was Pro Football Focus’s second runner-up to their Secondary Coach of the Year award. He and the Panthers finished the 2015 season 15-1 and went on and reached Super Bowl 50 on February 7, 2016. However, the Panthers fell to the Denver Broncos by a score of 24-10. After defensive coordinator Sean McDermott left to become head coach of the Buffalo Bills, Steve was then promoted to Sean’s former position.

A Career with the Arizona Cardinals

On January 22, 2018, he was hired as head coach of the Arizona Cardinals replacing Bruce Arians, who initially retired after the 2017 season before coming out of retirement in early 2019 to become head coach of the Tampa Bay Buccaneers. Steve then made his coaching debut in the 2018 season opener against the Washington Redskins in a 24-6 loss. He then recorded his first NFL victory as head coach in week 5 against the San Francisco 49ers. Overall, he finished the season with an NFL-worst 3-13 record and the worst record for the Cardinals since 2000. On December 31, 2018, he was fired by the Cardinals.

He was hired by the Cleveland Browns on January 14, 2019, to be their defensive coordinator under head coach Freddie Kitchens.

A Career at Missouri

On January 21, 2021, he was hired by the University of Missouri as their defensive coordinator under head coach Eliah Drinkwitz.

A Career with the Carolina Panthers (second stint)

The Panthers announced on February 9, 2022, the hiring of Steve as Matt Rhule’s new defensive pass game coordinator and secondary coach. That same year on October 9, after Rhule was fired, Steve went on to be named the Panthers’ interim head coach for the remainder of the season.

Adding up to his well-built body is a height of 6ft 2inches (1.88m) and has unknown weight.

Steve Wilks Salary and Net Worth