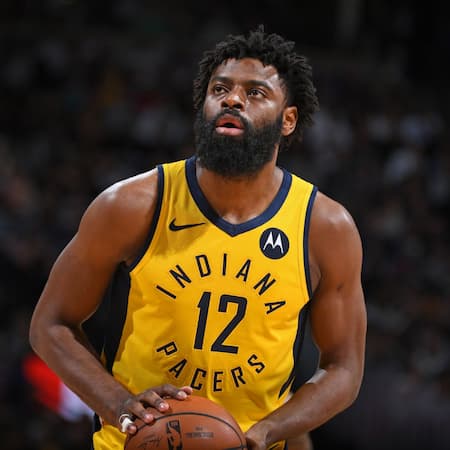 This article will answer every question you have about Tyreke Evans. Below are some of the frequently asked questions about him.

Who is Tyreke Evans?

Tyreke Jamir Evans also known as Tyreke Evans, is a famous American professional basketball player. He is a free agent.

In the 2009 NBA draft, he was selected fourth by the Sacramento Kings. Tyreke won the 2010 NBA Rookie of the Year Award. Evans was banned from the NBA on May 17, 2019, for violating the terms of its Anti-Drug Program that prohibits drug abuse. He was later reinstated in February 2022.

How Old is Tyreke Evans?

Evans is 32 years old as of February 2022 having been born on September 19, 1989, in Chester, Pennsylvania, U.S. Evans shares his birthdate with celebrities such as Lily Chee, Kyle Thomas, Jimmy Fallon, Sharan Jones, Pia Mia, and many more.

Who are Tyreke Evans Parents?

Does Tyreke Evans have any Siblings?

Tyreke is the youngest of four. He has three elder brothers who are James “Reggie” Evans, Julius Evans, and Dion Evans.

He received his high school education at American Christian Academy in Aston, Pennsylvania. and later enrolled at the University of Memphis from 2008 to 2009.

Evans is possibly single but he has been in a relationship with Angel Brinks (2010-2015).

Tyreke in his sophomore season proved an impressive talent on the basketball court and began drawing comparisons to no less than Hall of Famer Tracy McGrady. He put up averages of 32.1 points, 8.8 rebounds, 5.7 assists, and 4. 3 steals per game in his senior campaign. In 2008, Evans was considered a five-star recruit by Rivals.com and was listed as the No. 3 point guard and the N0.6 player in the nation in 2008.

In college, Tyreke announced his commitment to the Memphis Tigers. Evans struggled to play the shooting guard position after playing small forward throughout his high school. As soon as coach John Calipari in the eleventh game made Evans start at the point guard position, he flourished in a 60-45 win over Cincinnati. He tallied 14 points, 10 rebounds, and 8 assists after playing for 33 minutes. Evans was the only freshman among the USBWA 2009 finalists for the National Player of the Year. An award that is named in honor of Oscar Robertson.

Evans declared himself eligible for the 2009 NBA draft on March 31, 2009, and was selected by the Sacramento Kings on June 25, 2009, with the overall pick. He was named the Western Conference Rookie of the Month on December 1, 2009, for games played from the beginning of the season through November. For the second month straight, Evans was named Western Conference Rookie of the Month on January 4, 2010. He also won the 2010 Rookie and Sophomore Game MVP award on February 12, after recording 26 points, 6 rebounds, 5 assists, and 5 steals on 11-of-15 shooting. On April 27, 2010, Tyreke was awarded the 2009-10 NBA Rookie of the Year Award.

He missed 19 season games on account of plantar fasciitis in his left foot thereby did not play in the 2010-11 year’s NBA Rookie Challenge. During the NBA lockout, Tyreke agreed to a deal to play for Virtus Roma in Italy on November 24, 2011. The deal included an NBA clause that allowed him to return to the Sacramento Kings when the lockout ended. After the 2011 NBA lockout had ended, Evans returned to the kings in December. Tyreke missed 16 out of 20 games between November 30 and January 5 in 2012-2013 due to a left knee injury.

Return to Sacramento Kings in 2017

Evans returned to the Sacramento Kings on February 20, 2017. He was traded along with Langston Galloway, Buddy Hield, and 2017 first and second-round draft pick to the Sacramento Kings in exchange for Omri Casspi and DeMarcus Cousins. Evans scored 15 points off the bench in a 116-100 win over the Denver Nuggets in his first game for the Kings since 2013.

On July 10, 2017, Tyreke was signed with the Memphis Grizzlies. He led the team with 32 points in a 101-99 loss to the Orlando Magic on November 1, 2017. In a 112-89 loss to the Cleveland Cavaliers on February 23, Evans put up 15 points and 10 assists. In the contest, Evans broke a record of 27 held by Mike Miller by going 3 for 7 from outside the arc to make his 28th straight game with at least one 3-pointer. Following a 10-game absence because of a rib injury, Evans returned to the lineup against the Chicago Bulls on March 15.

Tyreke signed with the Indiana Pacers on July 6, 2018. On his debut, he helped defeat his former team, the Memphis Grizzlies, 111-83 on October 17 in the season-opener. After coming off the bench on November 16, Evans hit five 3-pointers and scored a season-high 23 points in a 99-91 win over the Miami Heat. Evans was then banned from the NBA on May 17, 2019, for violating the terms of its Anti-Drug Program that prohibits the usage of drugs. Evans became eligible to apply for reinstatement in 2021 and on February 14, 2022, he was officially reinstated.

Tyreke Evans Salary and Net Worth

Being a prominent basketball player in major teams, Evans with the Indiana Pacers has an annual salary of $12,400,000 and a net worth of $32.5 million.