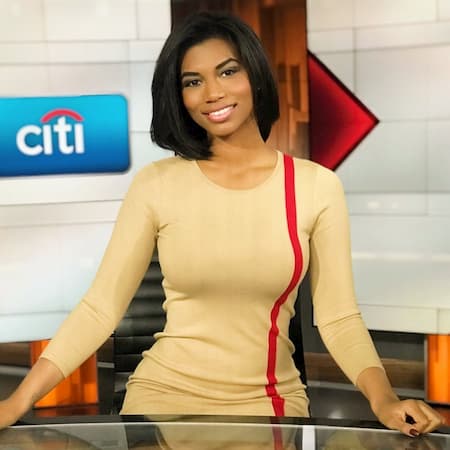 Taylor Rooks is an American sports journalist and broadcaster who appears on Bleacher Report and Turner Sports. She was previously a host, reporter, and correspondent at SportsNet New York. Rooks also worked for the Big Ten Network. She has appeared on BTN Live, BTN Football Pregame, and Women’s Sports Report.

Rooks appeared on CBS Sports Network reporting on the WBB Pre-NIT Championship at 19 years old. She also interned with the PGA Tour, Comcast SportsNet Chicago, and Fox Sports/Scout.com. She then appeared nightly on the popular sports television show, BTN Live, alongside Dave Revsine, Mike Hall, and Rick Pizzo, and also analysts such as Jim Jackson, Chuck Long, and Glen Mason.

Rooks was a sideline reporter for CBS Sports Network for the 2016-2017 football season. She was also a football and basketball recruiting reporter for scout.com. and has an on-air presence for major events, such as the Big Ten Football Championship.

Rooks hosts her own podcast, “Timeout With Taylor Rooks,” which airs on the SNY YouTube channel. Rooks drawn attention and acclaim for her one-on-one sit-downs with prominent athletes and celebrities from Dwyane Wade to Meek Mill. She went viral in September 2017 when she argued with New York Knicks forward Michael Beasley about what percentage of the brain humans use.

Rooks was born to Stephanie Rooks a dean at Gwinnett Technical College and Thomas Rooks, top rushing leader for the Illinois Fighting Illini. She is the niece of St. Louis Cardinals Hall of Famer, Lou Brock; and the niece of former Pittsburgh Steelers and New Orleans Saints NFL player, Marv Woodson.

Rooks is reportedly dating Jesse Williams, an actor best known for playing Dr. Jackson Avery on the ABC series Grey’s Anatomy and has appeared in the films The Cabin in the Woods, The Butler, and Band Aid.  He is also a director, producer, and activist.

Rooks became an on-air host, reporter, and correspondent for the Big Ten Network in August 2014. One of Rooks’ roles is to interact with fans and bring their social media topics onto the screen.

She regularly reports on Big Ten Games throughout the season and travels frequently for television shows. Rooks hosts the Women’s Sports Report, alongside Lisa Byington, covering all women’s sports in the Big Ten.

Rooks’ show, Take It There debuted on April 3rd on Bleacher report. Her first episode featured Philadelphia 76ers’ Jimmy Butler. Lillard appeared in episode two. Saquon Barkley of the NFL’s New York Giants, who won NFL Rookie of the Year in 2018, talked about how he believes he will become the game’s best-ever running back in episode three. Rooks traveled to Utah to interview Jazz center Rudy Gobert for episode four a few weeks after he broke the NBA single-season dunk record.
Her efforts are a nod to a shifting media landscape, where sports content has evolved from just scores and recaps to personalizing athletes and telling stories about the cultural aspects of the sport.

After college, Rooks modeled briefly but turned her focus to sports journalism.

Having been in the modeling industry, Rooks has an hourglass figure. Her body measurements are;