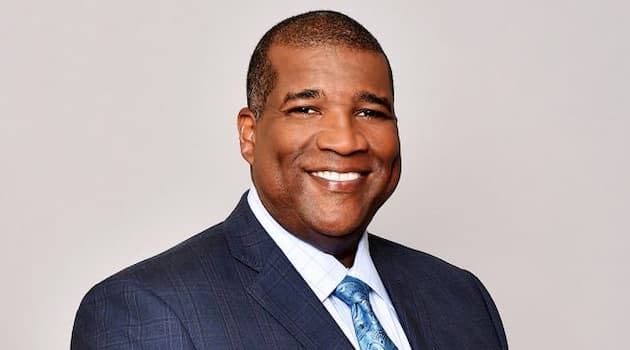 Curt Menefee is an American sportscaster and the host of Fox NFL Sunday. He is the play-by-play commentator for Seahawks preseason football.

Menefee began his media career during college, juggling schoolwork with a five-day internship schedule at a local station near his alma mater, Coe College. He has also been the play-by-play announcer for Showtime’s ShoBox: The New Generation, the network’s program focused on the most promising prospects in boxing. He has made additional appearances on MLB, UEFA Champions League, and International Boxing Organization broadcasts, and has amassed a list of credentials rivaling anyone in the industry.

Menefee was a sports reporter for MSG Network’s SportsDesk show prior to joining Fox Sports full-time. He was also the sports anchor for WNYW, New York City’s Fox flagship station. Menefee also appeared on-air on WTLV in Jacksonville, Florida. He has also been a host on a radio show on the popular Dallas, Texas sports radio station KTCK (“The Ticket”). Menefee made an appearance on MLB on Fox on May 24, 2008. He then held play-by-play duties alongside José Mota during a game between the Los Angeles Angels and the Chicago White Sox.

Curt hosted Fox’s coverage of the 2010 UEFA Champions League Final between FC Internazionale Milano and FC Bayern Munich on May 22, 2010. It was in the first broadcast of that tournament’s final on over-the-air broadcast television in the United States. He became the host of the UFC on Fox with Randy Couture and Jon Jones on November 12, 2011.

He joined FOX NFL SUNDAY as the show’s full-time host in 2007. FOX NFL SUNDAY is to be inducted into the National Association of Broadcasters (NAB), broadcasting Hall of Fame in April of 2019. Fox NFL Sunday features co-host Terry Bradshaw and Menefee with analysts Howie Long, Michael Strahan and Jimmy Johnson with reports from NFL insider Jay Glazer.

He called the NFL preseason for the Jaguars TV network from 2005-2007 and does NFL preseason television play-by-play for the Seattle Seahawks.

Menefee has not yet disclosed any information regarding his parents, and siblings.

Menefee graduated from Coe College in Cedar Rapids, Iowa in 1987. At college, he was a member of the Sigma Nu fraternity and inducted into the Sigma Nu Hall of Fame in 2016. In 2010, he gave his commencement speech and was awarded an honorary doctorate in Journalism.

Curt got married to Viollette Menefee on May 31, 2013, at Villa Cimbrone in Ravello, Italy. The couple engaged on July 19, 2012. Violette is originally from Oak Park, IL, and has been a nurse for the past 15 years. The couple lives in Los Angeles full time, which would make the commute for Curt to the New York studios a hell of a trip.

Curt was previously married to Annaliese Menefee whom he married in 1999.

Menefee joins Michael Arkush to examine a range of signature “disappointments” from the wide world of sports, interviewing the subject at the heart of each loss and uncovering what it means months, years, or decades later to be associated with failure.

Menefee is believed to receive a quite good salary and he has been able to acquire some good wealth. Having a long-time career as a sports reporter, Menefee has earned himself a big name in the industry and thus an increase in his value. However, his salary is not yet disclosed to the public.

He has an estimated net worth of $30 million. His wealth includes a very luxurious home whose actual worth is not yet determined.

Menefee’s ideal height is not yet revealed.

In December 2018, the veteran sportscaster put his Studio City home up for sale. The modern-vibe residence was listed for $2.569 million. The house has four bedrooms and 2.5 bathrooms are spread across 3,032 square feet of living space. The one-story home is backed by a swimming pool and fire-pit lounge with dramatic views of the city lights. The home also holds a gym, a two-car garage, and a master suite that opens directly outside.