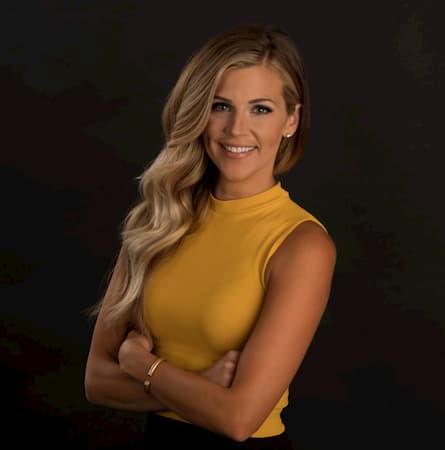 Samantha Ponder is an American sportscaster born on December 11, 1985, in Phoenix, Arizona. She is the host of Sunday NFL Countdown on ESPN. She was also a reporter/host for ESPN college football and also as a basketball sideline reporter.

Ponder transferred to Liberty University after Liberty’s Sr. Sports Producer Bruce Carey offered her a job as a sideline reporter for the Liberty Flames sports television network. She left Liberty in 2009 and she worked for Fox Sports Net and Fox College Sports as a sideline reporter for Pac-10 and Big 12 college basketball and football games. ESPN’s Longhorn Network announced on July 7, 2011, that it had hired Ponder as a sideline reporter. Samantha Ponder, along with Kevin Dunn and Lowell Galindo, was the newly created network’s first three talented hires. She relocated to Austin, Texas after accepting her position with the Longhorn Network.

Ponder was born to Cindi Steele and Jerry Steele. She has two brothers Barron Steele, and Jerrod Jefferson ¨JJ¨.

Samantha married then Minnesota Vikings quarterback, Christian Ponder, on December 17, 2012, in Hudson, Wisconsin after a brief courtship. Ponder started appearing on ESPN/ABC broadcasts by her married name on January 1, 2013, on the broadcast of the CapitalOne Bowl.

The couple welcomed their first child, a daughter Bowden Sainte-Claire “Scout” in June 2014. They welcomed a second child, a boy, True in June 2017, and a third child, a girl, Price, in July 2018.

While she was in New York City, she applied for a hostess job at ESPN Zone. There, she met Ben Keeperman, a college football researcher and manager with ABC Sports Radio and that led to an internship at the network. This in turn led to a researcher-assistant job with ABC-TV on the college football studio show.

She replaced Erin Andrews on College GameDay Saturdays at 10 AM ET on ESPN. She was also the co-host of the Saturday 9 AM ET edition on ESPNU. Ponder has also been a regular sideline reporter for ESPN’s Thursday Night College Football with Rece Davis, Jesse Palmer, and David Pollack from August 2012 until 2014.

Through her sportscasting career, Ponder has been able to acquire an estimated net worth of $12.2 million.

Ponder reportedly earns around $5 million annually but it is reported that she receives $4.9 million from ESPN.

The celebrated sportscaster stands at a height of 5 feet 4 inches.

Ponder’s body measurements are as follows: