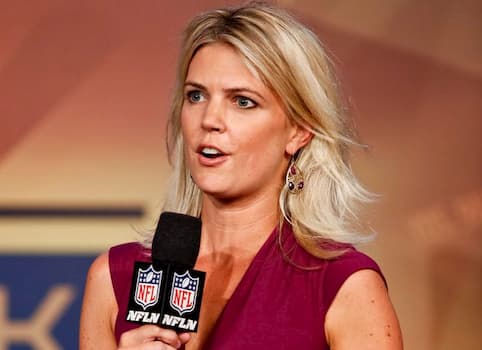 Melissa Stark is an American television personality and sportscaster born on November 11, 1973, in Baltimore, Maryland, U.S. She works as a reporter for the NFL Network and also previously worked with NBC. Starks was also a correspondent for NBC’s The Today Show.

Stark is best known for her three-year stint as a sideline reporter for Monday Night Football. She has worked for ESPN as a reporter.

Stark began her career in 1991 at WMAR-TV in Baltimore as a news intern where she worked on the assignment desk. She was also a news intern for the CBS Evening News with Dan Rather in 1993 and 1994. There, she wrote scripts and also assembled background information on investigative pieces for health correspondent Dr. Bob Arnot.

From 1994 to 1995, she was a production assistant and reporter for Virginia Sports Marketing in Charlottesville for the University of Virginia’s Coach’s TV Show. The show aired in all major markets in Virginia.

Stark was born to Walter Stark, an eye surgeon at the world-famous Wilmer Eye Clinic at the Johns Hopkins Hospital in Baltimore, Maryland.

Melissa attended the Roland Park Country School, a prestigious women’s prep school in Baltimore. She then attended the University of Virginia from where she earned a degree in Foreign Affairs and Spanish. She was also a member of the Kappa Alpha Theta sorority while in college.

Stark is married to Michael Lilley. The couple has two sons, Michael Jr. and Jackson, and twin daughters Clara and Clementine.

She joined ESPN in 1996 as the host of the weekly program Scholastic Sports America. During that time, she traveled across the United States covering high school and college sports focusing on human interest and issue-related stories.

She reported for ESPN’s SportsCenter from 1996 to 2003. There, she served as a regular contributor to Sunday NFL Countdown and the Emmy Award-winning show, Outside the Lines. She was also the SportsCenter on-site host for the NBA Finals, World Series, Stanley Cup Finals, and Final Four and covered national stories including Major League Baseball, National Hockey League, golf, and NCAA basketball for the network.

She was detained in Mexico after a security guard, not knowing she worked for ABC covering an NFL game, refused her, Al Michaels and Dan Fouts entry into the stadium where the game was being played in 2001. Their detention lasted a while before the matter was resolved and the charges dropped. Melissa admitted to being quite embarrassed that she couldn’t communicate with Mexican police since Spanish was one of her majors.

Starks has also appeared as a guest host on The View and she was also the co-host of ABC Entertainment’s 2001 pilot presentation of The Runner, a prime-time reality-based program conceived by Matt Damon and Ben Affleck.

She joined NBC News as a National Correspondent for The Today Show in July 2003. She would also anchor MSNBC Live. Melissa made her NBC Sports debut in 2004 contributing reports and interviews for the network’s coverage of the Triple Crown and also other big horse racing events for the network.

She also participated as a reporter for NBC’s New Year’s Eve coverage, hosted by Carson Daly in 2005. Starks then left MSNBC Live and The Today Show in November 2006. In 2009, she hosted MSNBC’s coverage of the 2009 Super Bowl.

Melissa started doing fieldwork for NFL Network, more specifically, the shows NFL Total Access and Around The League Live. Stark started with the 2013 NFL regular season. She was going to be hosting the on-site pre-game show, GameDay Kickoff (renamed GameDay First) at primetime designations along with Shaun O’Hara, Sterling Sharpe, and Brian Billick.

Though she is believed to have a good figure net worth, the actual or estimated amount is not yet revealed and neither is his annual salary.

Her other measurements include;