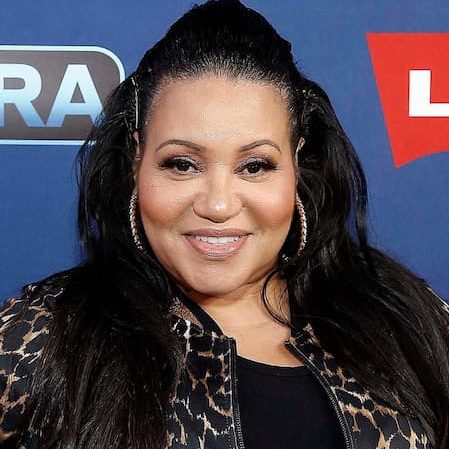 This article will answer every question you have about Salt. Below are some of the frequently asked questions about her.

Cheryl Renee James better known by her stage name Salt is an American well-known rapper and songwriter. She is notably known as a member of the American Grammy-award-winning female rap trio Salt-N-Pepa which also includes Pepa (Sandra Denton) and Spindrella (Deidra “Dee Dee” Roper). Moreover, she starred in The Salt-N-Pepa Show, a reality TV series focusing on reforming the group; which aired in 2008 on the VH1 network.

How Old Is Salt?

She is 56 years old as of October 2022, having been born on March 28, 1966, in New York City, New York, U.S. Salt shares her birthdate with celebrities such as; Lady Gaga, Alex Wassabi, Zoe Sugg, Caleb Coffee, Nate Wyatt, and many more.

Who are Salt’s Parents?

She was born to Barbara James (Mother) a bank manager. However, her father’s name and whereabouts are not mentioned on the internet.

Does Salt have Siblings?

News on the internet shows that she has two siblings and that she is the middle of three children.

She received her high school education at Grover Cleveland High School where she graduated in 1983. After high school, she attended Queensborough Community College where she studied nursing.

On her love life matters, she is seen as a person who hates drama and loves her privacy. She has managed to keep her marriage/dating life low-key thus leaving many with a lot of unanswered questions. In case there is news regarding this matter, we will update it here as soon as possible. However, she was previously married to Gavin Wray, they married in 2000 but divorced in 2018. Also, she has been in a relationship with Hurby Azor (born on September 26, 1964) a Haitian musician and hip-hop producer, they were in a relationship from 1984 until 1989.

She has two kids with her ex-husband Gavin. By the name Corin Way and Chapele Wray.

After forming a friendship with Denton, her then-boyfriend and co-worker Hurby Azor approached the pair and asked them to record a rap for a class project. With Azor’s guidance, she and Denton then formed the group “Super Nature” (which eventually changed to Salt-N-Pepa) and were then joined by Latoya Hanson who was replaced by Deidra Roper joined in 1987. The group has thus released five studio albums: Hot, Cool & Vicious (1986), A Salt with a Deadly Pepa (1988), Blacks’ Magic (1990), Very Necessary (1993), and Brand New (1997). Moreover, she co-starred in the 1993 motion picture Who’s the Man? And in 1997 she recorded the song “Stomp” with gospel artist Kirk Franklin and God’s Property for their album God’s Property, one of the best-selling albums in gospel music history.

Furthermore, they were the first female rap act to have gold, platinum, and multi-platinum albums and the first female rap act to win a Grammy. However, in 2002 the group disbanded but reformed in 2008. In November 2004, Salt appeared on VH1’s inaugural Hip Hop Honors along with Pepa but did not perform. However, she, Pepa, and Spinderella did perform at the second Hip Hop Honors on September 22, 2005, performing their hit “Whatta Man”. This was the first trio’s performance as Salt-N-Pepa since 1999. On October 23, 2008, Salt-N-Pepa performed “Shoop”, “Push It”, and “Whatta Man” at the 2008 BET Hip Hop Awards. The next year, she was featured in the Generation Gospel Exclusive on 106 & Gospel.

Her exact body measurements are not mentioned on the internet.

Salt’s Salary and Net Worth

Her salary is not mentioned on the internet but has a net worth of $14 million.