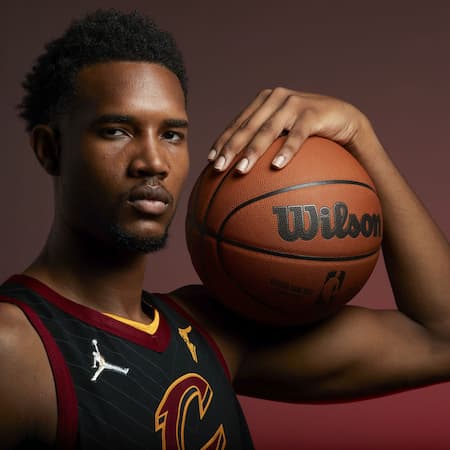 This article will answer every question you have about Evan Mobley. Below are some of the frequently asked questions about him.

Who is Evan Mobley?

How Old Is Evan Mobley?

He is 21 years old as of October 2022, having been born on June 18, 2001, in San Diego, California, U.S. Evan shares his birthdate with celebrities such as; Trippie Redd, Blake Shelton, Josh Dun, Paul McCartney, Takeoff, and many more.

Who are Evan Mobley’s Parents?

He was born to Eric Mobley (Father) a former basketball player, and Nicol Mobley (Mother).

Does Evan Mobley have Siblings?

He has an elder brother by the name of Isaiah Mobley (born on September 24, 1999) an American professional basketball player.

He received his high school education at Rancho Christian School. After high school, he attended the University of Southern California.

He began playing basketball along with his elder brother Isaiah from an early age under the guidance of their father Eric. Initially, Evan was reluctant to play basketball but became more interested in the sport in eighth grade when he stood 6’4. Thus he began playing high school basketball as a freshman at Rancho Christian School. He was teammates with his brother in his first three years. As a junior, he averaged 19.2 points, 10.4 rebounds, and 4.7 blocks per game. Moreover, he was named California Gatorade Player of the Year and The Press-Enterprise player of the year.

In his senior season, averaged 20.5 points, 12.2 rebounds, 5.2 blocks, and 4.6 assists per game thus leading Rancho Christian to a 22-8 record. He then repeated as California Gatorade Player of the Year, joining Jrue Holiday as the award’s only two-time winner. Also, he was named Morgan Wootten National Player of the Year. Moreover, he was selected to play in the McDonald’s All-American Game, Jordan Brand Classic, and Nike Hoop Summit. However, all three games were canceled due to the COVID-19 pandemic.

In the 2020 recruiting class, he was considered a consensus five-star recruit and one of the top three players, and at one point ahead of Cade Cunningham. On August 5, 2019, he committed to play college basketball for USC over offers from UCLA and Washington among other major NCAA Division I programs. He then became one of the highest-ranked players to join the program.

On November 25, 2020, in his college debut, he scored 21 points and had 9 rebounds in a 95-87 overtime win against California Baptist. The next year on March 11, at the Pac-12 tournament quarterfinals, he posted a career-high 26 points, 9 rebounds, and 5 blocks in a 91-85 double-overtime victory over Utah. He then went on to score 26 points for a second time in a 72-70 semifinal loss to Colorado while also recording 9 rebounds and 5 blocks.

As a freshman, he averaged 16.4 points, 8.7 rebounds, 2.8 blocks, and 2.4 assists per game. Because of his exemplary performance, he was named the Pac-12 Player of the Year, Defensive Player of the Year, and Freshman of the Year. And he became the second player from a major conference to win the trio of awards, joining Anthony Davis of the Southeastern Conference in 2012. On April 26, 2021, he declared for the 2021 NBA draft thus forgoing his remaining college eligibility.

A Career with the Cleveland Cavaliers (2021 to Present).

He was selected by the Cleveland Cavaliers third overall in the 2021 NBA draft. He then signed with the Cavaliers on August 3, 2021. That same year on August 8, he made his summer league debut in an 84-76 loss against the Houston Rockets where he posted 12 points, 5 rebounds, and 3 blocks in 28 minutes. He then made his NBA debut on October 20, where he put up 17 points, 9 rebounds, and 6 assists in a 132-121 loss to the Memphis Grizzlies.

However, he suffered a sprained right elbow on November 15, in a 98-92 loss to the Boston Celtics. Because of his exemplary performance, he was named the NBA Eastern Rookie of the Month for games played in October/November. He then became the first Cleveland Rookie to record five blocks in an NBA game on December 8, since LeBron James in March 2004. Overall, he finished the season starting all 69 games averaging 15.0 points, 8.3 rebounds, 2.5 assists, 1.7 blocks, and .8 steals per game.

While shooting .508, .250, and . 663 from the field, the three-point line, and on free throws respectively, in 33.8 minutes per game. Moreover, he led rookies in both rebounds and blocks per game while ranking 5th for points per game. And he also was the second-best rookie (behind Scottie Barnes of the Toronto Raptors) in win shares (5.2) and value over replacement player (1.5). He finished as the runner-up to Scottie Barnes in voting for the NBA Rookie of the Year.

In addition to playing basketball at the club level, he also has played basketball internationally. Thus he played for the United States at the 2018 FIBA Under-17 World Cup in Argentina. He averaged 9.3 points, 5.6 rebounds, and 2.6 assists per game in seven games thus helping his team win the gold medal. Also, he joined the United States for the 2019 FIBA Under-19 World Cup in Heraklion, Greece. However, he was limited to playing two games and a total of seven minutes in the tournament due to back spasms. But despite his absence, his team won the gold medal.

Evan Mobley’s Salary and Net Worth