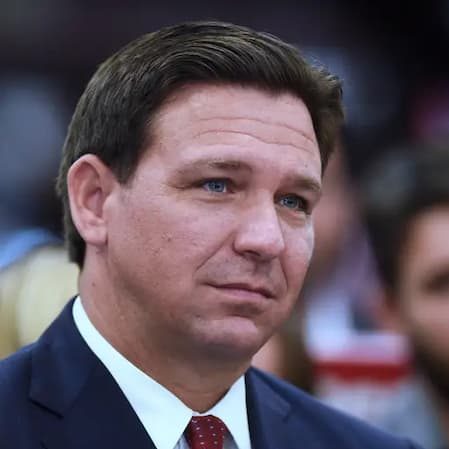 This article will answer every question you have about Ron DeSantis. Below are some of the frequently asked questions about him.

Who is Ron DeSantis?

Ronald Dion DeSantis abbreviated as Ron DeSantis is an American prominent attorney and politician who has served as the 46th governor of Florida since 2019. Before assuming governorship, he represented Florida’s 6th district in the U.S. House of Representatives from 2013 to 2018.

Being born in Jacksonville, he spent most of his childhood in Dunedin, Florida. In 2004, he joined the United States Navy where he was promoted to lieutenant before serving as an advisor to SEAL Team One and being deployed to Iraq in 2007. A year later, he returned to the U.S. and the U.S. Department of Justice appointed him to serve as a Special Assistant U.S. attorney at the U.S. Attorney’s Office in the Middle District of Florida. This position he held until his honorable discharge in 2010.

In 2012, he was first elected to Congress thus defeating his Democratic opponent Heather Beaven. During his reign, he became a founding member of the Freedom Caucus and was an ally of President Donald Trump. In 2016, he briefly ran for U.S. Senate but withdrew when incumbent Marco Rubio sought reelection. In August, he won the Republican nomination and chose state representative Jeanette Nunez as his running mate. The close results of the general election between DeSantis and Andrew Gillum triggered a machine recount. But DeSantis was declared the winner with a 0.4% margin of the victory.

During the COVID-19 pandemic in Florida, he resisted imposing restrictions such as face mask mandates, stay-at-home orders, and vaccination requirements. He then signed into law a bill that prohibited businesses, schools, cruise ships, and government entities from requiring proof of vaccination in May 2021. The next year in March, he signed into law the Parental Rights in Education Act, called the “Don’t Say Gay Law” by its school classrooms from kindergarten to grade 3. U.S. Representative Charlie Crist won the Democratic nomination on August 23, 2022. This means DeSantis will face Charlie in the November general election for governor.

How Old Is Ron DeSantis?

He is 43 years old as of August 2022, having been born on September 14, 1978, in Jacksonville, Florida, U.S. Ron shares his birthdate with celebrities such as; Wilbur Soot, Amy Winehouse, Paige Thorne, Datrie, Emma Kenney, and many more.

Who are Ron DeSantis Parents?

He was born to Ronald DeSantis (Father) and Karen Rodgers (Mother).

Does Ron DeSantis have Siblings?

He is married to the love of his life Casey DeSantis (born on June 26, 1980) an American former news and television show host who is the first lady of Florida. They married in 2010.

During his second year at Harvard Law, in 2004, he has commissioned as an officer in the U.S. Navy and assigned to the Navy Judge Advocate General’s Corps (JAG). In 2005, he completed Naval Justice School. And later that year he received orders to the JAG Trial Service Office Command South East at Naval Station Mayport, Florida as a prosecutor. He then was promoted from lieutenant, junior grade to lieutenant in 2006.

The next year, he reported to the Naval Special Warfare Command Group in Coronado California where he was assigned to SEAL Team One and deployed to Iraq. In April 2008, he returned to the U.S. at which time he was reassigned to the Naval Region Southeast Legal Service. The U.S. Department of Justice then appointed him to serve as a Special Assistant U.S. attorney. At the U.S. In February 2010, he was assigned as a trial defense counsel until his honorable discharge from active duty. As of 2022, he was still serving in the U.S. Navy Reserve.

He announced in 2012, that he would run in the Republican primary for Florida’s 6th congressional district. Previously, the district had been the 7th represented by 10-term Republican John Mica. DeSantis then won the six-candidate Republican primary with 39% of the vote while the runner-up state representative Fred Costello received 23%. In the November general election, he defeated Democratic nominee Heather Beaven 57-43% with majorities in all four counties. In 2014 and 2016, he was reelected.

He announced in May 2015, his candidacy for the United States Senate seat held by Marco Rubio. Rubio initially did not file for reelection due to his bid for the U.S. presidency.

A Career as Governor of Florida

He announced in January 2018, his candidacy for governor of Florida to succeed term-limited Republican incumbent Rick Scott. In December 2017, President Trump said that he would support DeSantis should he run for governor. Jonathan Martin of The New York Times wrote on July 30, 2018, that the support DeSantis’ primary campaign had received demonstrated both Trump’s king-making capacity. On August 28, 2018, he won the Republican primary by defeating his main opponent Adam Putnam. Thus his opponent in the general election was Democratic nominee Andrew Gillum.

DeSantis announced in September 2018, that state representative Jeanette Nunez was his running mate. On September 10, 2018, he resigned his House seat in order to focus on his gubernatorial campaign. In the election, DeSantis won by nearly 100,000 votes and Gillum conceded. However, Gillim took back his concession after late-counted ballots brought the race within less than 34,000 votes, a margin of 0.4%. Because of this reason, the close margin required an automatic machine recount of the ballots. Thus a machine recount was conducted in three statewide contests (governor, U.S. senator, and agriculture commissioner) began with a November 15 deadline. On November 17, DeSantis was confirmed as the winner and Gillim conceded.

A Career Tenure aside from the COVID-19 pandemic

On January 8, 2019, he became governor and prefilled the oath of office with the Florida secretary of state. The swearing-in ceremony was held at noon that day. In January 2019, he officially suspended Broward County Sheriff Scott Israel. This was because of his response to the mass shootings at the Fort Lauderdale airport and Marjory Stoneman Douglas High School appointing Gregory Tony to replace Israel. In his first two weeks in office, he appointed Barbara Lagoa, Robert J. Luck, and Carlos G. Muniz to fill the three vacancies on the Florida Supreme Court. Thus shifting the court’s majority from liberal to conservative. Next, he replaced the entire South Florida Water Management District board.

He has a “0” rating from the Human Rights Campaign for his voting record on LGBT-related issues and legislation. He told the Sun-Sentinel in 2018, that he “doesn’t want any discrimination in Florida, I want people to be able to live their life, whether you’re gay or whether you’re religious”. Less than a week after taking office, in January 2019, he issued a nondiscrimination order for state employees reiterating former governor Scott’s order. The order included a race, age, sex, color, religion, national origin, marital status, and disability, but had no protections for sexual orientation or gender identity.

Ron DeSantis Salary and Net Worth