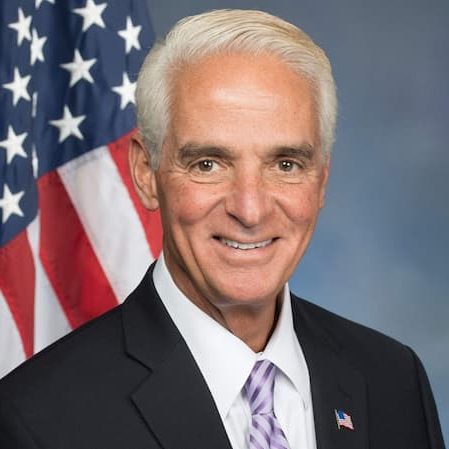 This article will answer every question you have about Charlie Crist. Below are some of the frequently asked questions about him.

Who is Charlie Crist?

Charles Joseph Crist Jr. abbreviated as Charlie Crist is an American eminent attorney and politician who has served as the U.S. representative from Florida’s 13th congressional district since 2017. From 2007 to 2011, he served as the 44th governor of Florida.

He began his political career as a Republican (GOP) serving in the Florida Senate from 1993 to 1999, running unsuccessfully against incumbent Bob Graham for the U.S. Senate in 1998, and then serving as Florida Education Commissioner from 2001 to 2003. From 2003 to 2007, he served as the Florida Attorney General before being elected governor in 2006.

While still a governor, he chose to run for a U.S. Senate seat. Initially, after leading polls in the 2010 race for the Republican nomination, he was overtaken in the polls by Marco Rubio when the state GOP committee decided not to fund his election bid. In April 2010, Charlie left the Republican Party to run as an independent. However, in the general election, he lost to Rubio in a three-way race taking 30% of the vote to Rubio’s 49% and Democratic nominee Kendrick Meek’s 20%. In January 2011, his term as governor ended.

After having left the Republican Party, he joined the Democratic Party on December 7, 2012, has endorsed President Barack Obama for reelection in 2012. He announced on November 1, 2013, that he was running for governor in the 2014 election. However, he lost to Governor Rick Scott his successor by a 1% margin. In 2016, he was elected to Congress from his home district the 13th defeating incumbent Republican David Jolly, 52%-48%, and becoming the first Democrat to represent his district since 1995. As of the 117th Congress, Charlie is the only former governor serving in the House. Moreover, is the Democratic nominee in the 2022 Florida gubernatorial election. There, he will face incumbent governor Ron DeSantis.

How Old Is Charlie Crist?

He is 66 years old as of August 2022, having been born on July 24, 1956, in Altoona, Pennsylvania, U.S. Charlie shares his birthdate with celebrities such as; Jennifer Lopez, Saffron Barker, Alexis Ryan, Tanner Braungardt, Bindi Irwin, and many more.

Who are Charlie Crist’s Parents?

He was born to Charles Joseph Crist Sr. (Father) an American physician of Greek Cypriot and Lebanese descent. And Nancy Lee (Mother) of Scots-Irish, Swiss, and Welsh decent.

Does Charlie Crist have Siblings?

He received his high school education at St. Petersburg High School where he graduated in 1974. After high school, he attended Wake Forest University for two years before transferring to Florida State University where he earned his undergraduate degree. Later, he received his J.D. from Samford University Cumberland School of Law.

According to news on the internet, it shows that he is possibly single. However, he has been previously married twice. First, he was married to Amanda Morrow, they married in July 1979, but divorced in 1980. Second, he was married to Carole Crist (born on October 20, 1969) an American businessman and former First Lady of Florida, they married on December 12, 2008, but divorced in February 2017.

In 1981, after graduating from Cumberland School of Law and passing the bar on his third attempt. He was hired as general counsel to Minor League Baseball which was headquartered in St. Petersburg. Having an interest in politics, for the first time in 1996, he was a candidate for public office in the Republican primary for a state Senate seat in Pinellas County. But after losing in a runoff, he joined his brother-in-law in private practice in St. Petersburg but soon returned to politics as an aide on the successful 1988 United States Senate campaign of Connie Mack III.

A Career at the Florida Senate

Charlie was elected to a two-year term in the Florida Senate in 1992, from the 20th district, which encompassed parts of St. Petersburg and South Tampa. In the election, he defeated incumbent Democratic State Senate Helen Gordon Davis of Tampa, 58.3 to 41.7%. Therefore he was successful to unseat Gordon Davis following the 1992 decennial redistricting process. After his two years in office were over, in 1994 he was reelected to a four-year term in the Senate defeating Democrat Dana Lynn Maley with 63.3% of the vote

A Career as Florida Education Commissioner

In 1998, he gained recognition as the Republican challenger to incumbent Democratic U.S. Senator Bob Graham. However, he lost to Graham by 26 percentage points. Later after two years in 2000, Charlie was elected Education Commissioner of Florida, a position he held until it became an appointive office in 2003 as the result of a 1998 constitutional amendment. After Charlie was elected attorney general, he left the position.

A Career as Florida Attorney General

He was elected Florida Attorney General in 2002. And his candidacy was supported by the host of America’s Most Wanted, John Walsh.

A Career as Governor of Florida

On January 2, 2007, he was inaugurated as the governor of Florida. This was after he has won the 2006 election.

As a proposed state constitutional amendment banning same-sex unions was headed to the ballot in Florida in 2006. Charlie said that such an amendment was unnecessary because state law already barred same-sex marriages. However, in September 2005, he signed a petition for the amendment during the Republican primary at the Christian Coalition’s request. He said in 2008, that he voted for the amendment which passed. After becoming an independent during the U.S. Senate race in 2010, he declared his support for civil unions encompassing “the full range of legal protections” including “access to a loved one in the hospital, inheritance rights, the fundamental things people need to take care of their families”.

A Career Role in the 2008 Presidential Election

Charlie signed a bill in May 2007, moving the date of Florida’s presidential primary to January 29, 2008, contrary to national political party rules. On January 26, 2008, he endorsed McCain in the Republican primary. McCain went on to win the Florida primary by five percentage points. That same year on October 28, he extended early voting hours of operation and declared that a “state emergency exists”. This was due to record voter turnout and resultant hours-long waits at locations throughout the state.

Charlie announced on May 12, 2009, that he would not run for reelection as governor in 2010. Thus making him the first Florida governor not to run for reelection since 1964. Instead, he opted to run for the US Senate. Therefore his main opponents were former Florida House Speaker Marco Rubio and U.S. Representative Kendrick Meek. Initially, he was the front-runner in the Republican primary but later trailed Rubio in the polls. As a result, he announced his intent to run as an unaffiliated candidate in the election. However, he lost in the general election receiving 29.7% of the vote to Rubio’s 48.9% and Meek’s 20.2%.

In January 2022, he joined the Tampa office of the national personal injury law firm Morgan & Morgan. This was after expressing an interest in returning to the legal field during his final week in office as governor of Florida. After almost six years with the firm, he was elected to represent Florida’s 13th congressional district in November 2016. In August 2012, he endorsed President Obama in his campaign for reelection over Republican nominee Mitt Romney.

Party Switch and The Party’s Over Career

Charlie announced on December 7, 2012, that he had joined the Democratic Party. Moreover, he began writing a book in July 2013, with Newsday columnist Ellis Henican about his political transition. In February 2014, the book The Party’s Over: How the Extreme Right Hijacked the GOP and I Became a Democrat was released. That same year in May, he told Fusion’s Jorge Ramos that he had left the Republican Party because of its racial attitudes.

A Career in the 2014 Gubernatorial Election

Charlie announced on October 20, 2015, that he would seek the Democratic nomination for Florida’s 13th congressional district, his home district in the 2016 U.S. House of Representatives elections. Previously he had announced on Twitter that he would not run for political office in 2016. Incumbent Republican David Jolly succeeded 43-year incumbent Bill Young in a 2014 special election. Was vacating the seat to run for the same Senate seat for which Charlie ran in 1998 and 2010. Thus in the general election, Charlie defeated Jolly 52-48% and became the first Democrat to win the seat in 62 years.

During this period, he was endorsed by the League of Conservation Voters (LCV) Action Fund. And he won a second term by winning with 57% of the vote.

A Career in the 2022 Gubernatorial Election

He announced on May 4, 2021, his candidacy for the Democratic nomination in the 2022 Florida gubernatorial election. On August 23, 2022, he won the primary election and will face Ron DeSantis in the general election on November 8, 2022.

He announced on May 9, 2013, that he supports same-sex marriage: “I most certainly support marriage equality in Florida and look forward to the day it happens here”. Both in 2006 and 2008, he announced his support for the Federal Marriage Amendment but by 2010 he had endorsed adoption rights for gay couples.

In announcing his candidacy for governor in 2021, he said “fully legalizing marijuana” would bring about “true justice in our state and in our country”. Moreover, he voted for the Marijuana Opportunity Reinvestment and Expungement (MORE) Act to legalize cannabis at the federal level; and expunge cannabis convictions in 2020.

Charlie Crist’s Salary and Net Worth