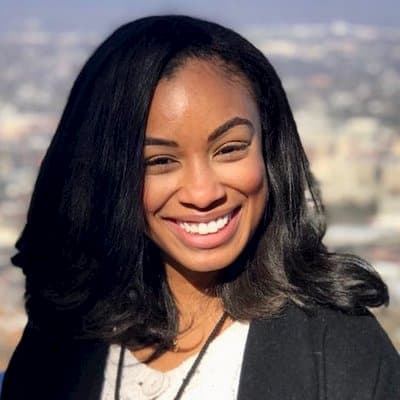 She was a politic nation intern for NBCUniversal, Inc in mid-2013 in New York City. Lezla was then a C-SPAN Washington Journal Intern at Cox Cable Freelance in September 2014. At Cox, she managed all guest and social media outlets. In 2014, she was also a volunteer at BC SPCA.

From September 2012 to 2015, Gooden served as a news anchor reporter in Hampton Va for WHOV News. She interned for various roles at C-SPAN such as radio, field crew, Book TV, and marketing department from April 2012 to May 2015.

Gooden was a freelance on-air reporter for Cox Cable Hampton Roads Inc. from September 2014 to December 2015. She also did an internship for CNN at Washington D.D. Metro Area.

She served as a reporter and multimedia journalist for WSLS 10 from September 2017 to November 2018 in Roanoke, Virginia Area. At WSLS, she served various other roles such as general assignment on-air reporter for 5 p.m. – 11 p.m. newscasts, writing headlines and web articles daily for the NBC 10 webpage, Shooting, writing and editing packages daily and reporting from the field. She also did live reporting on the scene during breaking news.

In March 2019, Gooden joined The E.W. Scripps Company in California as a reporter and multi-media journalist. Her roles include identifying stories, cultivating sources and producing enterprise pieces. She engages on-camera presentation including live from the field and studio. She also shares captivating stories on all media platforms and also social media.

Gooden writes, edits and also shoots news events for on-air and web. She then creates original print and also video content for social media platforms. Lezla does affective life and also breaking news coverage in the field and also a studio. She also serves as a dispatch reporter for ABC NEWS LIVE network.

Gooden joined 23ABC in April 2019 where she serves as a multimedia journalist. 23 ABC has a dedicated news team that works day and night to make sure Kern county residents are always well informed. The news team include

Gooden was born in Washington, D.C. Information about her date of birth is not yet disclosed. Therefore, it is hard to know her age or when she celebrates her birthday.

Gooden has not shared information regarding her parents and it is also not yet known if she has any siblings. She has only shared her mom, dad, Oprah, and Gayle King is her role models.

Gooden keeps her personal life very private. She has not shared any information regarding her dating life. She has also not been linked to anyone. Lezla is a dog mommy to Solomon Sebastian III and Sandy Boy who is dead. In her spare time, Lezla loves reading, dancing, swimming, and traveling.

Gooden’s annual salary ranges from $40,460 to $44,000. This is according to the average salary of a news anchor in Bakersfield

Through her work in journalism, Gooden has earned a fortune to her name. However, her exact net worth is not yet revealed.