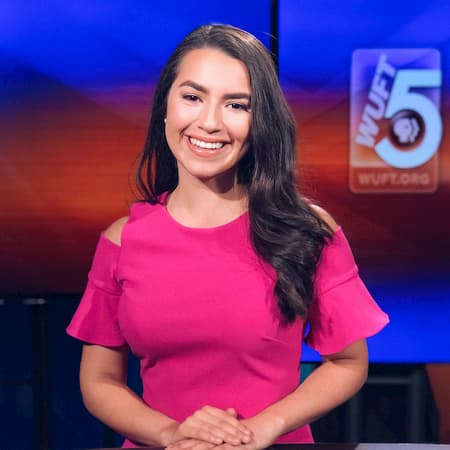 Garrido attended Immaculata La Salle High School from 2010 to 2014. At the school, she served in the Student Government Association as vice president and also an anchor for La Salle Television Productions. She was involved in the Lionettes Dance Team, Pep Club, and SALTT Club. She enrolled at Miami Dade College in 2014 to pursue an Associate’s Degree in Mass Communication/Media Studies. Garrido graduated in 2016. She was in the Phi Theta Kappa International Academic Honor Society, MDC In Focus Channel, and The Reporter.

In 2016, she enrolled at the University of Florida College of Journalism and Communications studying a Bachelor’s degree in Broadcast Journalism. At the university, she was associated with WUFT, National Broadcast Society, PopMedia TV, and Chompics Productions.

She joined Ralph Lauren in May 2013 as a Sales associate in Miami, Florida. In early 2015, she served as a marketing assistant intern at Courtesy Property Management. In July the same year, she served as Miami swim week intern for CLD PR and Chic Little Devil Style House. She later worked for Rockaway PR as a public relations intern.

In late 2015, she worked as a sports intern in Doral, Florida for CBS Corporation. She was also a public relations intern for Quinn PR in Miami/Fort Lauderdale Area. In mid-2016, she was a communications intern at NBCUniversal Media, LLC. She later served as the news in 90 anchors and producer for WUFT-TV in early 2017.

Garrido joined WUFT-TV as a reporter and producer in September 2016. At WUFT-TV, she has hosted “Take Me Away”. This is a 1-hour live show on WUFT-FM’s Radio Reading Service, about travel trends around the world. He hosted “Voices Podcast”. This is a pre-recorded podcast about the voices of the Gainesville, FL community. She became an Education reporter for WUFT-TV in August 2017.

Garrido joined KERO-TV in Bakersfield, California in December 2018 as a morning reporter.

23 ABC has a dedicated news team that works day and night to make sure Kern county residents are always well informed. The news team includes,

Garrido was born and raised in Miami, Florida. She has not yet disclosed any information regarding her date of birth. It is also not known when she celebrates her birthday.

Garrido has not yet disclosed any information regarding her parents and siblings.

Garrido keeps her personal life very private. She has not disclosed any information regarding her dating life or her marriage. She has also not been linked to anyone.

Garrido’s annual salary ranges from $40,460 to $44,000. This is according to the average salary of a news anchor in Bakersfield

Through her extensive work in reporting, Garrido has earned a great fortune to her name. However, her exact net worth is not yet revealed.