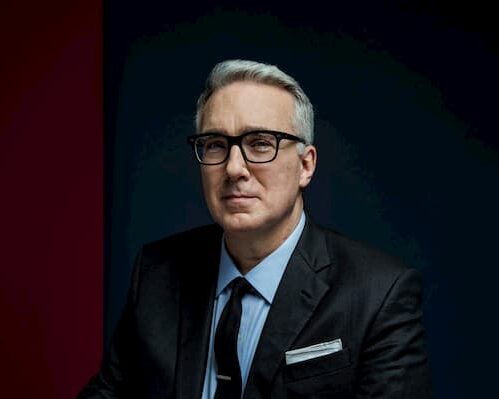 Keith hosted the weeknight political commentary program Countdown with Keith Olbermann on MSNBC from March 2003 to January 2011. Through the program, he received attention for his pointed criticism of right-wing and conservative politicians and public figures.

Though Olbermann has been described as a “liberal,” he has tried to resist being labeled politically and stating, “I’m not a liberal. I’m an American.”

Olbermann joined ESPN’s SportsCenter in 1992. He held the position until 1997 with exception of a period from the year 1993 to 1994 when he was at ESPN2. Olbermann joined ESPN2 as its “marquee” personality to help launch the network. With Dan Patrick, he often hosted SportsCenter’s 11:00 p.m. show and the two became a popular anchor team.

He won a Cable ACE Award for Best Sportscaster in 1995. The pair co-authored a book called The Big Show about their experiences working at SportsCenter. Olbermann also said that the short-lived ABC dramedy Sports Night was based on his time on SportsCenter with Patrick.

Olbermann was suspended for two weeks after he made an unauthorized appearance on The Daily Show on Comedy Central with then-host and former ESPN colleague Craig Kilborn. He referred to Bristol, Connecticut (ESPN’s headquarters), as a “Godforsaken place” at one point in the show.

He abruptly left ESPN under controversy and he apparently burnt the bridges with the network’s management. This incident began a long and drawn-out feud between Olbermann and ESPN.

He has not included a long and drawn-out feud between Olbermann and ESPN. He was not included in ESPN’s guest lineup for its 25th anniversary SportsCenter “Reunion Week” in 2004. The anniversary saw Craig Kilborn and Charley Steiner return to the SportsCenter set. Ten years after his departure, in an appearance on the Late Show with David Letterman, Olbermann said, “If you burn a bridge, you can possibly build a new bridge, but if there’s no river anymore, that’s a lot of trouble.” He also stated that he had recently learned that as a result of ESPN’s agreeing to let him return to the airwaves on ESPN Radio, he was banned from ESPN’s main (Bristol, Connecticut) campus.

It was then announced on July 17, 2013, that Olbermann would host his own one-hour nightly show on ESPN2. It was a two-year contract that allows him to deviate from the topic of sports, into realms such as “pop culture and current events,” as well as politics.

He was suspended by ESPN in 2015 for the week following Penn State University’s annual philanthropy THON due to a Twitter exchange he had with Penn State supporters. Keith stated, “PSU students are pitiful” in the twitter exchange. He said “I’d like to thank the students and alums of Penn State for proving my point about the mediocrity of their education and ethics.” He apologized on his program upon his return March 2, but noted, “I’m much more sorry about batting practice [i.e. trolling or cyber bullying].

ESPN announced that it would be Olbermann’s last month with the network in July 2015.

Keith returned to ESPN once again in January 2018, he presented occasional commentaries on SportsCenter throughout the first half of 2018. His role at ESPN expanded in May 2018 to include a return to the role of SportsCenter host and also the addition of occasional ESPN Major League Baseball play-by-play.

Olbermann was born to Marie Katherine (née Charbonier), a preschool teacher, and Theodore Olbermann, a commercial architect. He has one younger sister, Jenna (born 1968), and is of German ancestry. He grew up in a Unitarian household in the town of Hastings-on-Hudson in Westchester County. His father died on March 13, 2010, of complications from colon surgery the previous September.

Olbermann’s father had died several months before. He had taken a leave of absence shortly before his father’s death citing the need to spend time with his father. He occasionally recording segments to air at the beginning of the shows where he gave his views on the state of the American health care system and updating viewers on his father’s condition. Lawrence O’Donnell guest-hosted the show in his absence.

Olbermann attended Hackley School in nearby Tarrytown. He then enrolled at Cornell University at the age of 16. He graduated from Cornell University’s College of Agriculture and Life Sciences in 1979 with a BS in communication.

There is no available information regarding his relationship status or his dating history.

GQ magazine announced on September 12, 2016, that Olbermann would as a special correspondent, host a web series covering the 2016 US Presidential Election. The series which was titled The Closer with Keith Olbermann aired twice weekly on GQ.com. It was later retitled The Resistance after Donald Trump’s victory. It had nearly 170 million views on GQ’s YouTube and Facebook as of March 2017. Penguin Random House issued a hardcover book by Olbermann, Trump is F*cking Crazy (This is Not a Joke) in mid-October 2017 consisting of 50 essays based on The Resistance commentaries.

His own show, Countdown began airing on MSNBC on March 31, 2003, in the 8 p.m. ET time slot previously held by programs hosted by Phil Donahue and, briefly, Lester Holt. Its perrmat, per its name, involved Olbermann ranking the five biggest news stories of the day or sometimes “stories my producers force me to cover”, as Olbermann put it. It was done in numerically reverse order, counting down with the first story shown being ranked fifth but apparently the most important.

He launched Bloggermann, his Countdown blog, hosted on MSNBC.com on October 13, 2004. He used the format of the blog to expand on facts or ideas alluded to in the broadcast, to offer personal musings and reactions. MSNBC reported that Olbermann had signed a four-year extension on his contract with MSNBC for Countdown on February 16, 2007. This also provided for his hosting of two Countdown specials a year to be aired on NBC as well as for his occasional contribution of essays on NBC’s Nightly News with Brian Williams.

He co-anchored with Chris Matthews, MSNBC’s coverage of the death of fellow NBC News employee Tim Russert on June 13, 2008. Olbermann presented a tribute along with his several fellow journalists, in honor of Russert.

He co-anchored MSNBC’s coverage with Chris Matthews until September 7, 2008, during the 2008 U.S. presidential election. They were then replaced by David Gregory after complaints from both outside and inside of NBC that they were making partisan statements. The apparent conflict of interest had been an issue as early as May 2007. This is when Giuliani campaign officials complained about his serving in dual roles, as both a host and a commentator.

It was then announced in November 2008 that Olbermann had signed a four-year contract extension worth an estimated $30 million.

What Happened To Keith Olbermann?

In episode 147 of The Resistance which was on November 27, 2017, he announced his retirement from political commentary. Olbermann cited his belief that “this … presidency of Donald John Trump will end prematurely and end soon, and I am thus also confident that this is the correct moment to end this series of commentaries”.

The American sports, political commentator, and writer have acquired great wealth. He has an estimated net worth of $25 million.