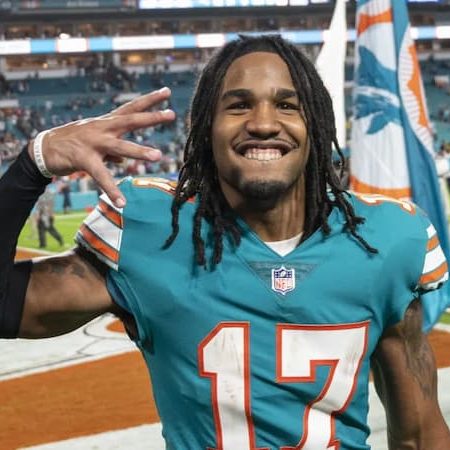 This article will answer every question you have about Jaylen Waddle Below are some of the frequently asked questions about him.

Who is Jaylen Waddle?

Jaylen Waddle is a popular American football wide receiver for the Miami Dolphins of the National Football League. Waddle played college football at Alabama and was drafted 6th overall by the Dolphins in the 2021 NFL Draft.

He was named the SEC Freshman of the Year after recording 45 receptions for 848 yards and 7 touchdowns as a true freshman at Alabama in 2018. as a Punt returner, Waddlealso returned 16 punts for 233 yards and a touchdown.

Waddle broke his right ankle when he was tackled while returning the opening kickoff in a game against Tennessee on October 24, 2020. He returned for the National Championship game against Ohio State. He announced that he would go for his senior season and enter the 2021 NFL Draft on January 14, 2021.

He was drafted 6th overall in the 2021 NFL Draft by the Miami Dolphins, reuniting him with his college quarterback Tua Tagovailoa. Waddle signed with the Dolphins on a $27.1 deal on May 14, 2021.

How Old is Jaylen Waddle?

Waddle is 23 years old as of 2022, having been born on November 25, 1998, in Houston, Texas. He shared his Birthday with popular people including Kevin Chamberlin, Alexis Rodriguez, Amy Grant, Amy Seimetz, Ana Sakic, Antonio Pantojas, Arturo Pérez-Reverte, Augusto Pinochet, and many more.

Who are Jaylen Waddle’s Parents?

Waddle was born to his parents Mrs. Lesha Redmon, and Mr. Jaylen waddle Sr. He Belongs to a normal working class.

He is not the only child of his parent as he also has 3 siblings Amber Allen, and Aspen Redmon. All of them are older than him.

Waddle joined Episcopal High School in Bellaire, Texas. As a senior, he played in the U.S. Army All-American Game. He committed to the University of Alabama to play college football. He made the selection on National Signing Day of 2018 and chose the Crimson Tide over Texas, Texas A&M, Florida State, TCU, and Oregon.

Not much-known information about marriage, he kept a secret from the media.

He has not shared any information about children with the media.

His first big breakthrough come in Week 12 against the Caroline Panthers, finishing with 137 receiving yards as the Dolphins won 33 to10. Waddle become known for his waddling celebration after touchdown, inspired by his last name throughout the season.

Waddle set the NFL rookie record for reception in a season with 104 in his 16th game of the season, beating Anquan Boldin’s old record of 101. He finished his rookie season with 104 receptions for 1, 015 yards and seven total touchdowns.

An American football wide receiver for the Miami Dolphins of the National Football League Waddle has an estimated net worth of $2 million as of 2022.