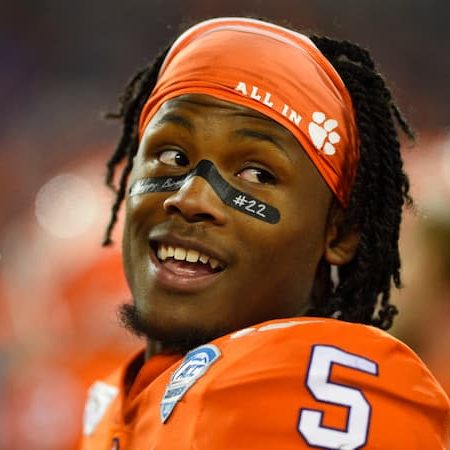 This article will answer every question you have about Tee Higgins. Below are some of the frequently asked questions about him/her.

Who is Tee Higgins?

Tamaurice William Tee Higgins is well-known as an American football wide receiver for the Cincinnati Bengals of the National Football League. He played college football at Clemson, where he won the 2019 College Football Playoff National Championship as a sophomore, and was drafted by the Bengals with the 33rd overall pick in the 2020 NFL Draft.

Higgins played in 13 games and had 17 receptions for 345 yards and 2 touchdowns as a freshman at Clemson in 2017. In the 2018 season, he entered his sophomore as a starter. In the College Football Playoff National Championship, he had 3 receptions for 81 yards in the 44–16 victory over Alabama. He finished with 59 receptions for 936 receiving yards and 12 receiving touchdowns.

He had 1,167 receiving yards and 13 touchdowns as his team finished with a 14–1 record, making it all the way to the National Championship in his junior season, which Clemson lost to LSU by a score of 42–25. Higgins had a 36-yard rushing touchdown in the game. Higgins decided to forgo his final year of eligibility and declare for the 2020 NFL Draft.

Higgins was selected by the Cincinnati Bengals in the second round with the 33rd overall pick in the 2020 NFL Draft. Higgins signed his rookie deal, a four-year contract worth $8.6 million on July 28, 2020.

Higgins finished his rookie season with 67 receptions for 908 yards and 6 receiving touchdowns. His 67 catches tied a Bengals rookie record set by Cris Collinsworth in 1981. The record would end up being broken the following year by rookie wide receiver Ja’Marr Chase, with 81 receptions. In 2020 his 908 receiving yards ranked him 3rd among all rookie receivers, behind Justin Jefferson and CeeDee Lamb.

How Old Is Tee Higgins?

Heggins is 23 years old as of 2022, he was born on January 18, 1999, in Oak Ridge, Tennessee, the U.S. He shared his birthday with popular people including Angelique Kerber, Ashleigh Murray, Devin Kelley, DJ Quik, Jason Segel, Jesse L. Martin, John Boorman, Jonathan, and others.

Who are Tee Higgins’s Parents?

Higgins was born to his parent Camilla Stewart and Eric Higgins. His parents met 4 years after she got out of jail and had been clean since then. They welcomed their son Higgins in 1999 and his parents split up in 2002.

Higgins has only 1 sister named,d Keke Higgins. Keke, put her college plans on hold to help and raise his brother.

Higgins joined Oak Ridge High School in Oak Ridge, Tennessee. As a senior, he had 68 receptions for 1,044 yards and 18 touchdowns. A 5-star recruit, he originally committed to the University of Tennessee to play college football before changing to Clemson University. He also played basketball in high school and was offered scholarships to play college basketball by numerous schools

He is possibly single and is not dating anyone. Higgins has kept secrets about his personal life and is far from tabloids.

Higgins has not shared any information about children, he kept it a secret with the media.

Prior to the start of the season, he had announced that after the 2021 NFL season he would be changing his jersey number from 85 to 5. In the 2021 regular season, he finished with 74 receptions for 1,091 yards 6 receiving touchdowns in 14 games played, improving upon his rookie season.

The Divisional Round against the Tennessee Titans, Higgins recorded 7 receptions for 96 yards in the 19 to 16 win. In the AFC Championship Game against the Kansas City Chief, He caught 6 passes for 103 yards, leading the Bengals in receiving yards in the 27 to 24 overtime won to advance to Super Bowl 56.

He scored the Bengals 1st touchdown of the game, a 6-yard pass from Joe Mixon in Super Bowl 56. Haggins scored a 75-yard touchdown pass, his 2nd touchdown of the game on the 1st play from scrimmage of the 2nd half. Higgins finished the game catching 4 passes for 100 yards, the most receiving yards by a player on either team in the 23–20 loss.

Higgins caught 2 passes for 27 yards before leaving the game in the second quarter with a concussion in Week 1 against the Pittsburgh Steelers.

An American football wide receiver for the Cincinnati Bengals of the National Football League Higgins has approximately a net worth of $1.5 million as of today.