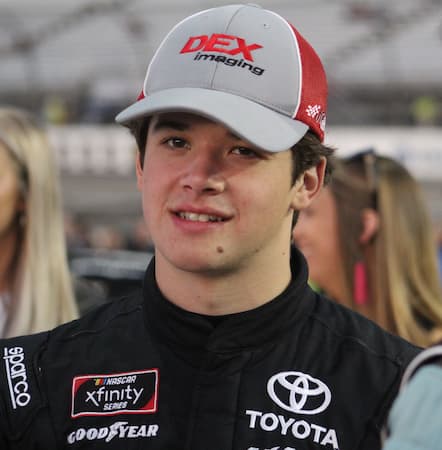 This article will answer every question you have about Harrison Burton. Below are some of the frequently asked questions about him.

Who is Harrison Burton?

Harrison Brian Burton is a notable American professional stock car racing driver. He is a full-time competitor in the NASCAR Cup Series. Harrison drives the No. 21 Ford Mustang for Wood Brothers Racing.

How Old is Harrison Burton?

He is 21 years old as of February 2022, having been born on October 9, 2000, in Huntersville, North Carolina, U.S. Harrison shares his birthdate with celebrities such as Bella Hadid, Landon Barker, John Lennon, Jacob Batalon, Rory Vlach, and many more.

Who are Harrison Burton’s Parents?

He was born to Jeff Burton (Father) a former professional stock car racing driver and a current racing commentator. And Kim Burton (Mother).

Does Harrison Burton have any Siblings?

Harrison has a sister who goes by the name of Paige Burton.

He received his high school education at Cannon High School and graduated in 2019.

He is in a relationship with his girlfriend Jenna Petty. They started dating in 2017.

He doesn’t have kids currently. In case of new news of having kids in the future, we will update it here as soon as possible.

A Career at ARCA Racing Series

Burton made his debut for Ranier Racing with MDM in his ARCA Racing Series. He started sixth but finished third. Burton returned in 2017 with MDM Motorsports, he chased down Dalton Sargeant on the final run of the race at Toledo Speedway. In 2018 he won his superspeedway debut which came at Pocono Raceway. It was announced on January 8, 2018, that Burton would run a partial ARCA schedule with MDM in 2018. Also on January 10, 2019, he would drive the Venturini Motorsports no. 20 Toyota for five races in 2019.

A Career in East Series

Burton became the youngest driver to start a race in the series. He garnered one pole, as many top fives, and finished eighth in the championship point standings while failing to finish two races. Harrison moved back to MDM Motorsports after HScott Motorsports with Justin Marks shut down. He made waves by campaigning a paint scheme with the number one on the rear quarter panels early in the season.

Burton’s performance gained attention and won him a rain-shortened race at Bristol. On that season, he won five of fourteen races and beat Gilliland for the championship after making up an eight-point deficit going into the final race. It was announced on January 8, 2018, that Harrison would drive a partial K&N season with MDM in 2018. At the K&N East season opener at New Smyrna Speedway, he finished 3rd after battling Todd Gilliland for the lead in the final laps.

A Career at the Truck Series

In late October, Harrison signed with Kyle Busch Motorsport. There he would drive the No. 18 Toyota Tundra for the 2016 Alpha Energy Solutions 250 at Martinsville Speedway. Burton was prevented from entering any events before October 9 of that year. This was due to NASCAR rules and regulations maintaining that a driver has to be sixteen years of age before competing in any national series event.

Harrison and Kyle Donahue made history by becoming the first drivers born in the 2000s decade and the 21st century to compete in the Truck Series and in any NASCAR national series. On January 8, 2018, it was announced that Burton would again pilot the KBM No. 51 for a partial schedule. After battling throttle issues during the race, he finished third in the M&M’s 200. Burton would work full time in 2019 the replacement of Noah Gragson at KBM number 18 18 entry on November 14, 2018.

A Career at the Xfinity Series

A Career in the Cup Series

Gaunt Brothers Racing announced on April 15, 2021, that Burton would make his Cup Series debut with the team in their No. 96 Toyota in the race at Talladega that month. In the race, Harrison would become the first driver born in the 2000s decade to run a Cup Series race. He was then named the driver of Wood Brothers Racing’s no. 21 Ford Mustang on July 15, 2021, for the 2022 season, thereby replacing Matt DiBenedetto. In his full-time debut at the 2022 Daytona 500, Burton led three laps but was flipped during a multi-car accident on lap 62 making him finish in the 39th position.

Adding up to his well-built body is a height of 6ft 1inch and a weight of 84kg.

Harrison Burton’s Salary and Net Worth

His salary is not revealed yet but he has an estimated net worth of approximately $1-5 million.