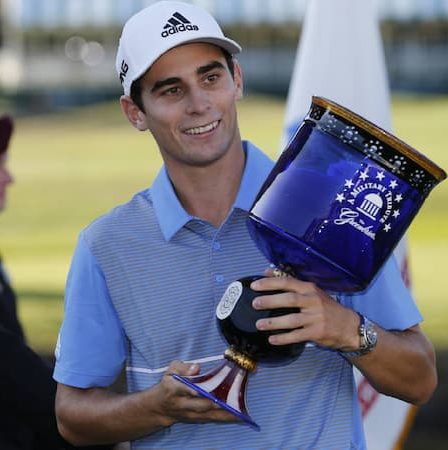 This article will answer every question you have about Joaquín Niemann. Below are some of the frequently asked questions about him.

Who is Joaquín Niemann?

Joaquin Niemann is a well-known Chilean Professional golfer. From May 2017 to April 2018, he was ranked the number one amateur golfer. Currently, Joaquin is a member of the PGA Tour where he has claimed two wins.

How Old is Joaquin Niemann?

He is 23 years old as of February 2022, having been born on November 7, 1998, in Santiago, Chile. Joaquin shares his birthdate with celebrities such as  Anthony Reeves, Bethany Mota, Lorde, Ashley Newman, Amybeth McNulty, and many more.

Who are Joaquin Niemann Parents?

He was born to Jorge Niemann (Father) and Pamela Zenteno (Mother)

Does Joaquin Niemann have any Siblings?

He has a brother who goes by the name of Lukas Niemann.

He received his high school education at an unknown school. Once we have the name of the school, we will update it here as soon as possible. Niemann had planned to attend the University of South Florida but was denied entry due to his TOEFL scores.

He is currently dating an architecture student Christina Hellema Puga.

He currently has no kids. In case of any new news regarding whether he will have children, we will update it here as soon as possible.

Joaquin withdrew from the 2018 U.S. Open and Open Championship in order to turn professional before the 2018 Valero Texas Open. In his first tournament as a professional golfer, he finished 6th. Niemann earned himself a PGA Tour card for the 2018-19 season after a top-10 finish (T5 at The Greenbrier) in eight tournaments. He won his first PGA Tour victory in September 2019 in A Military Tribute at The Greenbrier. Joaquin, therefore, became the first PGA Tour winner from Chile and the youngest international PGA Tour winner since 1993.

He went ahead and played on the International team in December 2019 at the 2019 Presidents Cup at Royal Melbourne Golf Club in Australia. He went 0-3-1 and lost his Sunday singles match against Patrick Cantlay. Niemann joined Harris English in a playoff after a final round 64 at the Sentry Tournament of Champions in January 2021. But he was defeated on the first extra hole. In July 2021, Joaquin shot a bogey-free 18-under par for 72 holes to tie with Troy Merritt and Cameron Davis for the lead at the Rocket Mortgage Classic. Niemann was eliminated on his first bogey of the week on the first playoff hole. And Davis was the eventual champion. Niemann in February 2022, won the Genesis Invitational hosted by Tiger Woods by shot rounds of 63-63-68-71. He finished the tournament at 19-under par, two strokes ahead of Cameron Young, and Collin Morikawa.

Joaquin Niemann Salary and Net Worth

Due to him being a professional golfer, he has an average of $2,031,556 prize money per year and a net worth of about $10 million.