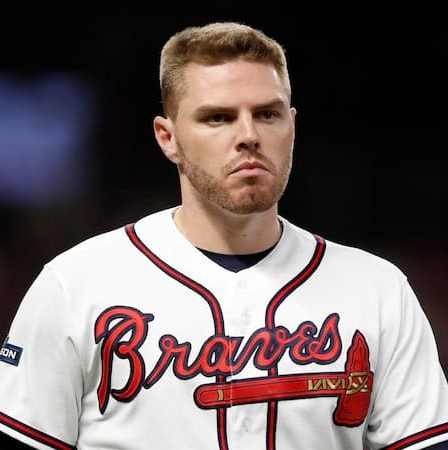 This article will answer every question you have about Freddie Freeman. Below are some of the frequently asked questions about him.

Who is Freddie Freeman?

Frederick Charles Freeman is a notable American professional baseball first baseman in Major League Baseball (MLB). He is currently a free agent. He has professionally played exclusively for the Atlanta Braves.

How Old is Freddie Freeman?

He is 32 years old as of March 2022, having been born on September 12, 1989, in Fountain Valley, California, U.S. Freddie shares his birthdate with celebrities such as; Sydney Sweeney, RM, Paul Walker, Connor Franta, Pierre Boo, and many more.

Who are Freddie Freeman’s Parents?

He is born to Fredrick Freeman (Father) and Rosemary Freeman (Mother). His parents were both born in Canada. Freddie’s mother died while he was 10 years old.

Does Freddie Freeman have Siblings?

He has two elder brothers by the name of Andrew and Phillip.

He has been married to the love of his life Chelsea Goff, since 2014.

He and his wife have three sons by the names of; Maximus Turner Freeman, Brandon John Freeman, and Frederick Charles Freeman II.

Freeman was selected by the Atlanta Braves in the second round, with the 78th overall selection, of the 2007 MLB draft. He then signed with the team for $409,500 forgoing his college scholarship. Freddie was the Brave’s fifth-best prospect according to Baseball America heading into the 2009 season. He was also the 11th-best prospect overall in their mid-season top 25.

On September 1, 2010, Freeman was called up to the Braves as part of the team’s September call-ups, and also made his MLB debut that same day. He then got his first career MLB hit on September 5, 2010, off Florida Marlins pitcher Clay Hensley, and on September 21, 2010, he hit his first MLB home run off Philadelphia Phillies pitcher Roy Halladay. With the Braves he played 20 games and batted.167.

He began the 2011 season as the starting first baseman for the Braves. His performance improved despite having a slow start and therefore had been mentioned as a strong candidate for rookie of the year. Freddie hit two home runs against the Colorado Rockies on July 4, 2011, for his first multi-home run game. By July 18, he was the first Brave’s rookie to reach 50 RBIs since Hank Aaron accomplished this feat in 1954.

This made him be named NL rookie of the month of July. And during that month, he led all Major League rookies with 38 hits, a .362 batting average, and a .433 on-base percentage in 27 games. Freddie and Dan Uggla in August became the first members of the Braves to have concurrent 20 game hitting streaks in the modern era. His 20 games streak ended on August 7. He, therefore, finished the 2011 year batting .282 with 32 doubles, 21 home runs, and 76 RBI in 157 games played. In the NL Rookie of the Year balloting, Freeman finished 2nd to teammate Craig Kimbrel.

In 2013, Freddie was selected as a finalist for the 2013 Major League Baseball All-Star Game Final Vote. He won with a record-setting total of 19.7 million fan votes but was unable to play because due to a thumb injury suffered three days prior to the game. He finished the season with a .319 batting average, along with 23 homers and 109 RBI in 147 games played. Freeman also finished fifth on the National League Most Valuable Player award voting.

Freddie agreed to an eight-year $135 million extension on February 4, 2914. For the second time, he was named an All-Star in 2014 and played the last three innings of the game. On June 27, 2014, during a game against the Philadelphia Phillies, he hit a three-run homer off Kyle Kendrick to left-center field caught by broadcaster Tom McCarthy. Freddie finished the 2014 season by appearing in all 162 games batting .288 with 90 walks, 43 doubles, 18 home runs, and 78 RBI.

He was listed as day-to-day on June 17, 2015, with an injury to his right wrist originally sustained during a game against the New York Mets on June 13. Freeman missed the June 18 game against the Boston Red Sox, ending a streak of 234 consecutive games played, which led the majors at the time. On June 23, he was officially placed on the 15-day disabled list and received a platelet-rich plasma injection soon afterward. In the 2015 season, Freddie hit for a .276 batting average with 18 home runs and 66 RBIs in 118 games. This was his shortest season since 2011.

Despite Freeman’s wrist injury he was expected to lead the team on the field at the beginning of the 2016 season. He had a difficult start to the season but began hitting well in June. And on July 15, he hit his first career cycle in a 9-8 win against the Cincinnati Reds. After the performance, he was named National League Player of the Week. On September 13, he recorded his first 30-home run season, shortly after claiming his second Player of the Week award in the 2016 season. He was named the September National League Player of the Month at the end of the year. Freeman in the 2016 season played 158 games with a .302 batting average, 43 doubles, 34 home runs, and 91 RBI. He finished sixth on the National League Most Valuable Player award voting.

Freddie represented Canada at the 2017 World Baseball Classic, something he always wanted to do. In his first game at Sun Trust Park, he doubled in a couple of runs, and on April 9, he set a franchise record for most consecutive plate appearances to get on base with a solo homer. On May 17, Freeman left the game after he was hit by a pitch from Aaron Loup of Toronto. He was then ruled up to 10 weeks after an MRI and CT scan was made which revealed a non-displaced wrist fracture in his left hand.

Freeman stated in June 2017 while rehabilitating the hand injury that he offered to play third base upon his return. Because Matt Adams, his first base replacement was hitting well. In August, the Braves manager stated that Freeman would no longer play third base regularly, as injuries to other players necessitated late-season promotions and allowed Freeman to return to first base. He then finished the 2017 season batting .307 with 28 home runs and 71 RBIs despite only playing in 117 games.

In October 2017, Freddie underwent LASIK surgery to help protect vision problems that had manifested since 2012. Freeman was selected to his third All-Star game as the National League’s starting first baseman, He also accepted an invitation to participate in the 2018 Home Run Derby. He finished the regular season as the National League leader in base hits with 191. He also finished as the Braves’ team leader in batting average (.309), on-base percentage (.388), slugging percentage (.505), doubles (44), walks (76), and RBIs (98). Freeman also received the 2018 Wilson Defensive Player of the Year Award and finished 4th on the National League Most Valuable Player award voting

Freddie was selected at midseason as the National League starter at first base in the 2019 Major League Baseball All-Star Game. This was his second consecutive start in the game and his fourth All-Star Game selection overall. In 2019, he batted .295/.389/.549 with 38 home runs and 121 RBIs and led NL hitters in line drive percentage (27.5%). He and teammates Ronald Acuna Jr. and Ozzie Albies won the 2019 National League Silver Slugger Awards for first base, outfield, and second base respectively. Freddie also won the Wilson Defensive Player of the Year Award for the second consecutive season. It was revealed on October 18, that Freeman underwent right elbow surgery to remove a bone spur.

Before the season began, In July 2020, Freeman tested positive for COVID-19. He hit his first career grand slam on September 4, in the second game of a doubleheader against the Washington Nationals off pitcher Tanne Rainey. And after two days, he hit another grand slam against Nationals pitcher Kyle Finnegan. Freddie then reached 1,500 career hits with a home run on September 9. He finished the shortened 60-game regular season hitting .341/.462/.640 with 13 home runs and 53 RBIs. Freeman was named the NL MVP and therefore became the first Braves player to win the award since Chipper Jones in 1999. He has also been voted for the Baseball Digest MLB Player of the Year, Baseball America Player of the Year, MLBPA Player’s Choice Player of the Year, and MLBPA Player’s Choice NL Outstanding Player. He was awarded the 2020 National League Hank Aaron Award.

Freddie was named the National League’s starting first baseman for the 2021 All-Star Game. In a game against the Miami Marlins on August 18, 2021, Freeman hit for the cycle. This became the fourth time an Atlanta Braves player had ever done so, the second time Freeman has done it, and only the ninth time in Braves’ history. He finished the 2021 season with a .300 batting average, a .896 OPS, and 31 home runs.

In 2021, the Atlanta Braves became the second team in Major League Baseball history to have each starting infielder hit at least 25 home runs in a season. The Braves faced the Houston Astros in the 2021 World series. In the fifth game, Freddie hit a home run that traveled 460 feet. As the Braves defeated the Astros and made Freeman a World Series champion. He then received his third consecutive Silver Slugger Award and his first Babe Ruth Award, at the end of the season.

For the first time in Freeman’s career, he declined the Braves’ qualifying offer and became a free agent.

Freddie Freeman Salary and Net Worth

Before being a free agent, he had a $12 million yearly salary with the Atlanta Braves. He also has a net worth of $40 million.