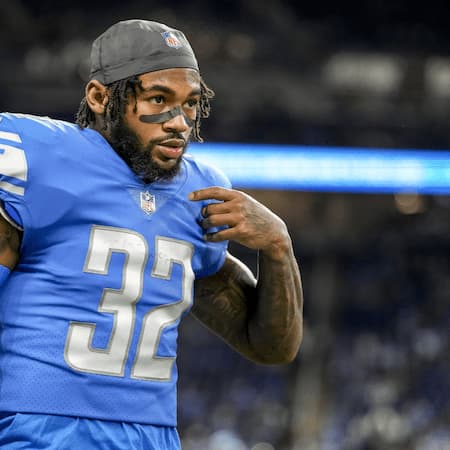 This article will answer every question you have about D’Andre Swift. Below are some of the frequently asked questions about him.

Who is D’Andre Swift?

D’Andre Tiyon Swift is a professional American football running back for the Detroit Lions of the NFL (National Football League). While at college, he played college football at Georgia and was drafted with the third pick in the second round of the 2020 NFL Draft by the Lions.

How Old Is D’Andre Swift?

He is 23 years old as of October 2022, having been born on January 14, 1999, in Philadelphia, Pennsylvania, U.S. Swift shares his birthdate with celebrities such as; Alejandro Rosario, ZHC, Grant Gustin, Mackenzie Turner, and many more.

Who are D’Andre Swift’s Parents?

He was born to Darren Swift (Father) and Ayanna Swift (Mother).

Does D’Andre Swift have Siblings?

He received his high school education at St. Josephs’s Preparatory School. Where he played high school football and rushed for 1,564 yards on 149 carries with 25 touchdowns. After high school, he attended the University of Georgia.

In 2017, as a freshman, he was the third running back behind future NFL starters Nick Chubb and Sony Michel. He rushed for 597 yards on 73 carries with three touchdowns. In his sophomore year, he split carries fairly evenly with junior Elijah Holyfield though he was used more often as a receiver. In games against Florida, Kentucky, and Auburn that season, he had three consecutive games with over 100 yards rushing in.

He was selected with the 35th overall pick in the second round of the 2020 NFL Draft by the Detroit Lions. The Lions went on to sign Swift to a four-year contract worth $8.5 million on July 13, 2020.

For the 2021 season, he was joined by Jamaal Williams in the Lions’ backfield. Over the season’s first 8 games, he totaled over 100 yards from scrimmage in four of them, He then went on to record 130 and 136 rushing yards against the Pittsburgh Steelers and Cleveland Brown in weeks 10 and 11 respectively.

D’Andre Swift’s Salary and Net Worth