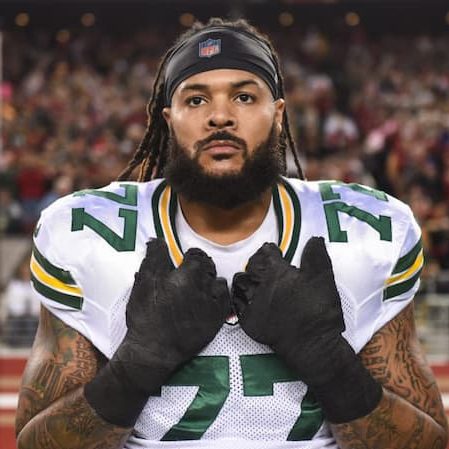 This article will answer every question you have about Billy Turner. Below are some of the frequently asked questions about him.

Who is Billy Turner?

William Mason Turner abbreviated as Billy Turner is an American professional football offensive tackle for the Denver Broncos of the NFL (National Football League). He was drafted in the third round of the 2014 NFL Draft by the Miami Dolphins. While at college, he played college football at North Dakota State.

How Old Is Billy Turner?

He is 31 years old as of October 2022, having been born on October 17, 1991, in Shoreview, Minnesota, U.S. Billy shares his birthdate with celebrities such as; Eminem, Queen Naija, Alaïa McBroom, Simply Nailogical, Holly H, and many more.

Who are Billy Turner’s Parents?

He was born to Maurice Turner (Father, born on September 10, 1960) a former running back in the NFL. And Keren Johnson Turner (Mother).

Does Billy Turner have Siblings?

He has a brother by the name of Bryan Kehl also played in the NFL.

He was an all-state lineman for the Mustangs football team of Mounds View High School, as he helped them compile a 26-8 record, winning titles and advancing to state playoffs all three years during his career.

From 2010 to 2013, he attended North Dakota State University. In 2010, he started in 12 games. Whereas the next year, he started 14 games. In 2012, he started in 15 games and was named to the all-Missouri Valley Football Conference first-team. The next year, he made all 15 starts at left tackle and was responsible for zero quarterback sacks. Moreover, he was named All-Missouri Valley Football Conference first-team and two-time Offensive Lineman of the Week. In 2012 and 2013, he was a consensus FCS All-American and was part of three FCS national championship teams. Also, he participated in the 2014 Senior Bowl.

CBS Sports projected Billy as a second-to-third selection. He thus became the highest-selected North Dakota State player since Lamar Gordon in 2002. He was then drafted by the Miami Dolphins in the third round (67th overall).

He was forced into the starting lineup on October 9, 2016, and had to learn to play left tackle on short notice with starting left tackle, Branden Albert out with an illness and backup left tackle, Laremy Tunsil out with an injured ankle. After he gave up 3 sacks and 2 quarterbacks pressures to the Tennessee Titans, he was released by the Dolphins along with Dallas Thomas.

On October 12, 2016, he was claimed off waivers by the Baltimore Ravens but three days later he was released.

A Career with the Denver Broncos

On October 17, 2016, he was claimed off waivers by the Denver Broncos. However, he was placed on the injured reserve on October 17, 2017, after suffering a broken hand in week 6 against the New York Giants. He then resigned from the Broncos on March 17, 2018. He then started 11 games, four at right tackle in place of an injured Jared Veldheer, and the final seven games of the year at left guard in place of injured Max Garcia.

A Career with the Green Bay Packers

On March 14, 2019, he signed a four-year $28 million contract with the Green Bay Packers. He went on to start the first 13 games of the 2021 season at right tackle before sustaining a knee injury during the Packers’ week 14 game against the Chicago Bears and missed the rest of the regular season. Thus Dennis Kelly started at right tackle for the remainder of the regular season. The Packers then went on to finish the season with the No. 1 seed in the NFC with a 13-4 record. Upon Billy’s return from injury, he started at left tackle during the Packers’ divisional-round playoff loss to the San Franciso 49ers in place of the injured David Bakhtiari. On March 14, 2022, he was released by the Packers.

A Career with the Denver Broncos (second stint)

Billy Turner’s Salary and Net Worth

He has an average annual salary of $2.5 million and a net worth of $9 million.