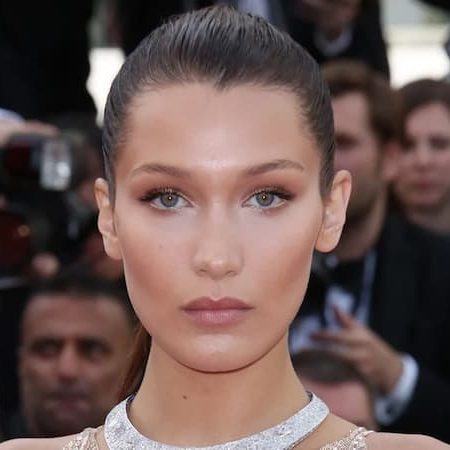 This article will answer every question you have about Bella Hadid. Below are some of the frequently asked questions about her.

Who is Bella Hadid?

Isabella Khair Hadid is a famous American model. She was voted in 2016, “Model of the Year” by industry professionals for Models.com. Isabella over a span of four years had made 27 appearances on international Vogue magazine covers.

At the age of 16, she began her modeling career. In August 2014, she was signed to IMG Models and made her New York Fashion Week debut the following month. Hadid in 2017, broke the record for the most Vogue September covers in one year by appearing in five international editions (China, Spain, Brazil, Australia, and Arabia)

How Old is Bella Hadid?

She is 25 years old as of March 2022, having been born on October 9, 1996, in Washington, D.C. Hadid shares her birthdate with celebrities such as; Landon Barker, John Lennon, Jacob Batalon, Rory Vlach, and many more.

Who are Bella Hadid Parents?

She was born to Mohamed Hadidi (Father) is a Palestinian Jordanian real estate developer. And Yolanda Hadid (Mother) is a Dutch former model

Does Bella Hadid have Siblings?

She has an elder sister by the name of Gigi Hadid and a younger brother by the name of Anwar Hadid. Both of them are models. She also has two older paternal half-sisters Marielle Hadid and Alana Hadid. Marielle is a businesswoman while Alana is a successful fashion designer and fashionista.

She received her high school education at Malibu High School and graduated in 2014. Bella then moved to New York City to study photography at the Parsons School of Design.

She is currently dating art director Marc Kalman. They’ve been dating since July 2020. And on July 8, 2021, Hadid made their relationship public.

When she was 16 years old, she began her modeling career with a commercial project for Flynn Skye. Also, she appeared in modeling projects such as Lesa Amoore’s “The Swan Settings”, alongside actor Ben Barnes, and Holly Copeland’s “Smoking Hot”. Bella also modeled for Hanna Hayes’ Fall/Winter 2013 Collection and did campaign work for Chrome Hearts, the family brand of her best friend, Jesse Jo Stark.

On August 21, 2014, Hadid signed to IMG Models. In September, she made her New York Fashion Week debut, walking for Desigual. And in December she made her first cover appearance on Jalouse Magazine and was featured on day 27 of LOVE Magazine’s Love Advent Calendar. Bella made her runway debut in February 2015, walking for Tom Ford’s Fall/Winter 2015 collection. And walked for amfAR’s 22nd Cinema Against AIDS Gala. At New York Fashion Week, in late 2015, Hadid walked for Diane von Furstenberg, Tommy Hilfiger, Marc Jacobs, and closed Jeremy Scott’s show. Bella made her Chanel debut in December 2015, walking for the first time for Metiers d’Art in Rome. She appeared on the November 2015 cover of Seventeen.

She made her Chanel Couture debut during Paris Haute Couture Spring/Summer Fashion Week in January 2016. Hadid also starred in Marc Jacobs’ campaign “My America”. She walked for Fenty x Puma at New York Fashion Week in February. Bella made her Australian Fashion Debut at Mercedes-Benz Fashion Week in May exclusively opening and closing the Misha Collection Resort 17 show. Hadid became an ambassador for Dior Makeup on May 31, 2016. Bella started off the Spring/Summer 2017 season during New York Fashion Week opening for DKNY and walking for Michael Kors, Anna Sui, Ralph Lauren, and Marc Jacobs.

Bella exclusively opened for Versus (Versace), during London Fashion Week. She opened shows for, Alberta Ferretti and Fendi, walked for Max Mara, Moschino, Versace, and Bottega Veneta, during the Milan Fashion Week, and closed for Philosophy di Lorenzo Serafini. Hadid during 2016, appeared on the cover of Seventeen Mexico, Self Service Magazine, CR Fashion Book’s “#CRGirls”, V Magazine, Harper’s Bazaar (Spain, Japan, Australia, and Russia), Elle (Brazil, United States, United Kingdom, Thailand, Indonesia, and Malaysia) and many more. In May, she scored her first Vogue cover for Vogue Turkey and made her short film debut in Tyler Ford’s film Private.

Bella in January 2017, walked in Givenchy’s Fall/Winter Menswear campaign in Paris. She also opened the show for Alexandre Vauthier and walked for Chanel. Hadid became an ambassador for Bulgari’s accessory line and TAG Heuer in February. In Los Angeles, she walked in with her sister Gigi’s Tommy Hilfiger collaboration show Tommy x Gigi. And closed the H&M Studio show in Paris. She opened shows for Prabal Gurung and Zadig & Voltaire during New York Fashion Week. Walked for Alexander Wang, Sies Marjan Carolina Herrera, Brandon Maxwell, Michael Kors, Anna Sue, and Ralph Lauren, and closed for Oscar de la Renta. Together with her sister Gigi, they started off the Spring/Summer season together by starring in Fendi and Moschino campaigns.

Also with her younger brother Anwar, she shot a campaign for Zadig & Voltaire. She starred alongside Miles McMillan during the season in Giuseppe Zanotti, Justin Grossman in NARS Cosmetics, and Kendall Jenner in Ochirly’s Fall campaign. Bella’s first cover of 2017 was a reprint of her editorial from W Magazine United States. Her first new cover of the year was for Teen Vogue, appearing with her best friend Jesse Jo Stark. Hadid broke the record for most Vogue September covers in one year (formerly kept by Doutzen Kroes in 2013 and Linda Evangelista in 1993), by appearing in five international editions: China, Spain, Brazil, Australia, and Arabia.

Bella appeared on Vogue Korea in January 2018. She starred on the cover of British Vogue with her sister Gigi in March. Hadid starred on the covers of Allure and Pop Magazine in September. And in October appeared on the cover of Harper’s Bazaar Arabia. For the fall of the 2018 season, she opened for Off-White at Paris Fashion Week. At Paris Fashion Week in February 2019, Bella walked for Redemption, Haider Ackerman, and Off-White. Alongside models Irina Shayk and Joan Smalls, Hadid walked for CR Runway’s 90th Anniversary show.

Bella became the co-founder and business partner of Kin Euphorics on September 1, 2021, a nonalcoholic adaptogenic beverage brand. She oversees the company alongside its CEO and founder Jen Batchelor.

Hadid donated a pair of denim jeans to Johny Dar’s Jeans for Refugees project in 2016, which supported the International Rescue Committee. She volunteered to help make 500 meals for the Bowery Mission in November 2018, for Thanksgiving on behalf of System of Service, Hashtag Lunch Bag, and Nike. Bella announced in April and May 2020, that she made a donation to local food banks in New York City and to Feeding America to support COVID-19 relief. She has shown support for the Black Lives Matter movement. And when protests resurged in May 2020, Bella announced that she would be donating to the NAACP Legal Defense Fund. Following an explosion in Beirut, Lebanon she announced in August she would be donating to thirteen charities in Lebanon.

Bella Hadid Salary and Net Worth