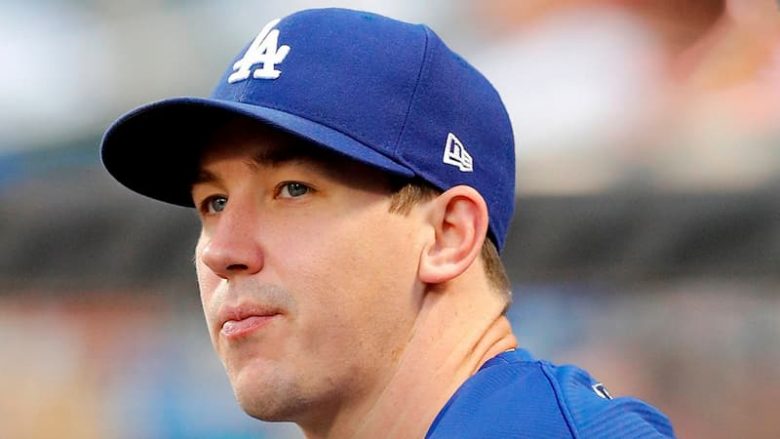 This article will answer every question you have about Walker Buehler. Below are some of the frequently asked questions about him.

Who is Walker Buehler?

Walker Anthony Buehler is an American professional eminent baseball pitcher for the Los Angeles Dodgers of MLB (Major League Baseball). While at college, he played college baseball for the Vanderbilt Commodores and was a member of their 2014 College World Series championship team. The Dodgers selected him in the 2015 MLB draft 24th overall and made his MLB debut in 2017. In 2019 and 2021, he was an All-Star and helped the Dodgers win the 2020 World Series.

How Old Is Walker Buehler?

He is 28 years old as of August 2022, having been born on July 28, 1994, in Lexington, Kentucky, U.S. Walker shares his birthdate with celebrities such as; Payton Moormeier, Dom Brack, Mia Hayward, GloRilla, Soulja Boy, and many more.

Who are Walker Buehler’s Parents?

He was born to Tony Buehler (Father) and Karen Walker (Mother).

Does Walker Buehler have Siblings?

He has three siblings by the name Bella Walker, Brady Buehler, and Delaney Buehler.

He is married to the love of his life McKenzie Marcinek. They began dating in high school and the couple resides in Lexington.

In the 14th round of the 2012 Major League Baseball Draft, he was drafted by the Pittsburgh Pirates but did not sign and instead honored his commitment to Vanderbilt University. In 2013 as a freshman, he made 9 starts and appeared in 16 games. Where he had a 4-3 record with a 3.14 earned average (ERA) and 57 strikeouts. As a sophomore, he went 12-2 with 111 strikeouts and a 2.64 ERA and was a member of the 2014 College World Series championship team.

Next, he pitched 5.1 innings of no-hit relief on June 16, 2014, thus retiring the first nine batters he faced and striking out 7 batters in Vanderbilt’s 6-4 win over the University of California Irvine. After the 2014 season, he played for Team USA and the Yarmouth-Dennis Red Sox of the Cape Cod Baseball League (CCBL). As a junior in 2015, he posted a 2.97 ERA in 78.2 innings for the Commodores while striking out 81 and walking 25. Over his three-year college career, he went 20-7 with a 2.88 ERA in 49 games striking out 249 against only 83 walks.

The Los Angeles Dodgers selected Walker with the 24th overall selection of the 2015 Major League Baseball draft. And signed for a $1.78 million bonus on July 17, 2015. Soon after his signing, it was revealed that he would require Tommy John surgery and would therefore be sidelined for a year and a half with recovery. He returned from injury and made his professional debut on August 23, 2016, for the Arizona League Dodgers. There, he struck out three and retired all six batters he faced. On August 28, he was promoted to the Great Lakes Loons of the Midwest League.

For the Loons, he appeared in two games making one start, and did not allow a run or a hit in the three innings he pitched. He went on to begin the 2017 season with the Rancho Cucamonga Quakes of the California League and allowed only three runs in 161⁄3 innings over five starts before he was promoted on May 2, to the Double-A Tulsa Drillers of the Texas League. He made 11 starts while with the Drillers with a 3.49 ERA and was selected to appear in the mid-season Texas League all-star game. At midseason, he was promoted to the Triple-A Oklahoma City Dodgers. For Oklahoma City, he had a 4.63 ERA in 23+1⁄3 innings. And because of his exemplary performance, he was selected as the Dodgers minor league pitcher of the year, at the end of the season.

A Career with the Los Angeles Dodgers

On September 6, 2017, the Dodgers added Walker to the major league roster for the first time. And made his major league debut that night with two scoreless innings of relief against the Colorado Rockies. On September 21, he picked up his first major league win with a scoreless inning of relief against the Philadelphia Phillies. Overall, he appeared in Dodgers games in 2017 allowing eight runs in 9+1⁄3 innings (7.71 ERA) with 12 strikeouts and eight walks.

On April 23, 2018, he made his first major league start against the Miami Marlins, pitching five scoreless innings. He then took a no-hitter through six innings with eight strikeouts on May 4, until being taken out of the game after 93 pitches. On June 21, he was placed on the disabled list because of a rib injury. He made his return from injury on June 28, and made an appearance out of the bullpen but allowed five earned runs in one inning before returning to the disabled list.

He then made his first start in over a month against the Los Angeles Angels, allowing two solo home runs to Kole Calhoun but no other earned runs. On August 22, he set a new career high in strikeouts with nine. After three more nine-strikeouts starts, on September 19, he struck out 12 against the Colorado Rockies. He then started the NL West Tie-Breaker Game against the Colorado Rockies on October 1. And got his first career MLB run batted in his 47th plate appearance. Overall in 2018, in 24 appearances for the Dodgers (23 starts and one relief appearance) and was 8-5 with a 2.62 ERA and 151 strikeouts.

He had his first career home run on April 11, off Michael Wacha of the St. Louis Cardinals. On June 21, he threw his first complete game against the Colorado Rockies. Thus becoming the first Dodger pitcher with over 15 strikeouts and no walks. Next, he was selected to the 2019 MLB All-Star Game his first all-star appearance in which he gave up one run in one inning. On August 3, he pitched another complete game against the San Diego Padres. Overall in the 2019 regular season, he finished with a record of 14-4 and a 3.26 ERA (9th in the NL) in 30 starts with two complete games and 215 strikeouts. His .778 win-loss percentage was the best in the league and he also led the league in complete games with two. In the Cy Young Award voting, he finished ninth.

In the pandemic-shortened 2020 season, he posted a 1-0 record with a 3.44 ERA in eight starts striking out 42 batters in 36.2 innings. He then started the first games of the first and second-round playoff series against the Milwaukee Brewers and San Diego Padres. There he pitched just four innings in each game with three total runs allowed. Against the Atlanta Braves, in the NLCS he started the first and sixth games working a total of 11 innings with only one run allowed while striking out 13. He was then the winning pitcher in Game 6. And thus the Dodgers went on to win the World Series in six games.

On April 8, he made his first Opening Day start for the Dodgers against the Rockies. He allowed two runs in five innings to record the win. He pitched his first career shutout against the Arizona Diamondbacks on April 25, striking out 19 batters and allowing only three hits and no walks. In 2022, he made 12 starts for the Dodgers with a 6-3 record and 4.02 ERA. However, he left a game with the Giants on June 10 because of discomfort in his pitching elbow. This eventually resulted in him undergoing season-ending surgery. After his surgery was performed, the Dodgers announced that Walker underwent a second Tommy John surgery. As well as flexor tendon repair likely keeping him sidelined until the 2024 season.

Walker Buehler Salary and Net Worth

He has an annual average salary of $4 million and has an estimated net worth of between $1 and $5 million.