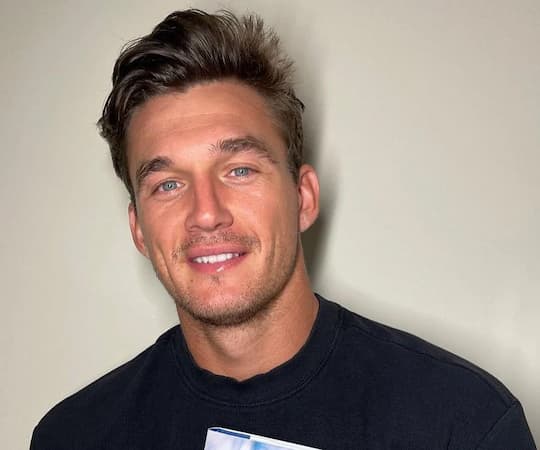 Who is Tyler Cameron?

Tyler Cameron is a famous American professional television personality, model, and general contractor. He gained national popularity as a contestant on season fifteen of The Bachelorette, starring Hannah Brown, in which he was the season’s runner-up. Cameron serves as a model with Soul Artist Management in New York City and Next Management Miami.

Cameron started his career as a model while still a college student, following being discovered via Instagram. He finally went on to sign modeling contracts with Soul Artist Management in New York City and Next Management Miami.

Tyler was then cast in season fifteen of The Bachelorette in 2019, starring former Miss Alabama USA Hannah Brown. Filming took place throughout the spring of 2019 and he was later announced as a contestant by the American Broadcasting Company (ABC) on May 7, 2019. Cameron continued to place as the runner-up, being eliminated by Brown in the finale episode, aired on July 30, 2019, and was filmed in Crete.

In the reunion aired the same night, Brown revealed she had broken up with the winner Jed Wyatt after it arose that he was dating another woman before and during filming. She asked Cameron on a date, to which he agreed, but they finally did not end up continuing their relationship. Within his time on the show, Tyler gained widespread media attention for his many feminist statements, and for frequently coming to the defense of Brown after she was the victim of acts of alleged sexism by contestants including Luke Parker.

Following the end of the season, fans of the program and the media alike called on Tyler to be announced as the lead for the upcoming season of the Bachelor. However, host Chris Harrison said that he believed Cameron wouldn’t be a suitable choice after media reports of him dating fashion model Gigi Hadid. Later, he revealed that he was in talks to be the Bachelor, but rejected the offer in an interview. Finally, Peter Weber was selected as the lead for the twenty-fourth season.

How old is Tyler Cameron?

Who are Tyler Cameron’s parents?

Tyler Cameron was born to Andrea Cameron and Jeff Cameron in Jupiter, Florida. His mother served as a realtor in South Florida. During the Great Recession, his family suffered economically, and they lost their home and his parents divorced. His mother died due to a brain aneurysm at the age of 55, on March 1, 2020.

Does Tyler Cameron have siblings?

Cameron was born to his parents as the oldest in a family of three children. He has two younger siblings, both brothers, Ryan Cameron and Austin Cameron.

Cameron attended Jupiter Community High School and then joined Wake Forest University. Here he played football for the Wake Forest Demon Deacons football team as the backup quarterback and graduated with a bachelor’s degree. He then attended the Florida Atlantic University College of Business graduating with a Master of Business Administration degree in 2018.

Cameron loved sports in college and played football as a backup quarterback for the college team. He had also initially intended to play football professionally and had been signed as an undrafted free agent by the Baltimore Ravens. However, he was forced to halt his football career following a shoulder injury.

Cameron does not have any children of his own as he is still single. He has also not been linked to any serious and long-term relationship.

American television personality, model, and general contractor, Cameron has been active from college to the present. He has appeared in various TV shows and models for Soul Artist Management in New York City and Next Management Miami. Cameron has garnered an accumulative net worth of approximately $3.26 million as of 2022.