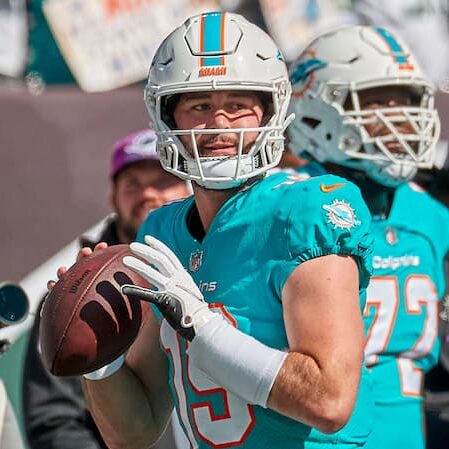 This article will answer every question you have about Skylar Thompson. Below are some of the frequently asked questions about him.

Who is Skylar Thompson?

Skylar John Thompson is a professional American football quarterback for the Miami Dolphins of the NFL (National Football League). While at college, he played college football at Kansas State.

How Old Is Skylar Thompson?

He is 25 years old as of January 2023, having been born on June 4, 1997, in Palmyra, Missouri, U.S. Thompson shares his birthdate with celebrities such as; Mackenzie Ziegler, Angelina Jolie, Central Cee, Kaci Conder, Adam Saleh, and many more.

Who are Skylar Thompson’s Parents?

He was born to Brad Thompson (Father) and the late Teresa Thompson (Mother). And Kathy Thompson (Stepmother).

Does Skylar Thompson have Siblings?

He has three siblings. Two brothers by the names of Anthony and Eric. And one sister by the name of Ashley.

He was a four-year letterer and starting quarterback punter and kicker at Fort Osage High School. He went on and threw for 2,129 yards on 142 passes with 26 touchdowns on only 3 interceptions as a senior. Also, he led the Fort Osage Indians to a 13-1 record and a state championship title over Chaminade High School. In the state championship game alone, he threw for Missouri state record of 455 yards and 7 touchdowns.

In total in his high school career, he threw for 6,222 yards on 423 passes (a 63% completion rate) with 72 touchdowns on just 9 interceptions. ESPN named him a 3-star recruit and a 4-star recruit by 247Sports. And he went on to accept a full-ride scholarship to Kansas State over offers from Illinois, Iowa State, Kansas, Louisville, North Dakota State, Ohio, Tulsa, UNLV, Wake Forest, and Wyoming. As well as several preferred walk-on spots, including Arkansas, Oklahoma, and Missouri among many others. Moreover, he lettered in basketball, baseball, and soccer and at certain points in his career, was named all-Missouri in both basketball and soccer.

As a freshman after redshirting and being named Scout Team Player of the Year. He thus appeared in eight games and had four starts, throwing three touchdowns on 267 yards. As a sophomore, he was named the full-time starter and kept that starting role until graduation. But was constantly plagued with injuries throughout college. However, his sophomore year was riddled with minor injuries.

This included a broken rib and a twisted ankle and in 2020, he was ruled out for the season after sustaining a serious upper-body injury against Texas Tech that required “immediate surgery”. Again, he was injured in week 3 of 2021 against Southern Illinois. This saw him have limited time as a backup while healing and not returning full-time until week 10. When he was healthy, he played well and has since been considered one of the best quarterbacks in the history of Kansas State football. Overall, he finished his passing career with 7,134 yards on 552 passes (a 63% completion rate) for 42 touchdowns and 16 interceptions. Moreover, he was named an effective running QB with 1087 total rushing yards and 26 TD.

Before the NFL Draft. he was predicted to be an undrafted free agent. This was because of his history of injuries, his age, and a “lack of consistent production as a passer” according to NFL.con.

He was drafted with the 247th overall pick in the seventh round of the 2022 NFL Draft by the Miami Dolphins. His performance during the first two games of the 2022 preseason was notable, with ProFootballTalk noting that his success might force the Dolphins to keep Thompson on the active roster. This was rather than losing him to another team. Also, Dolphins head coach Mike McDaniel noted that it would be difficult to leave Thompson off the main roster in light of his strong preseason performances. At the conclusion of the 2022 preseason, he was ranked second among quarterbacks in passer rating (138.5). This was behind only Sam Ehlinger of the Indianapolis Colts.

Moreover, he was named to the 53-man roster after final cuts. In week 5, he made his NFL debut against the New York Jets after Teddy Bridgewater left the game with a concussion. In the game, he completed 19 of 33 passes for 166 yards and an interception in the 40-17 loss. He was then announced on October 15, 2022, as the Dolphins’ week 6 starter against the Minnesota Vikings. This was after both Tua Tagovailoa and Teddy Bridgewater were dealing with concussions. However, he sustained a thumb injury after completing 7 of 13 pass attempts for 89 yards and was replaced by Bridgewater, who cleared concussion protocol and was active as the second quarterback.

Skylar Thompson’s Salary and Net Worth

He has an average annual average salary of $935,554 and an estimated net worth of between $1 and $5 million.