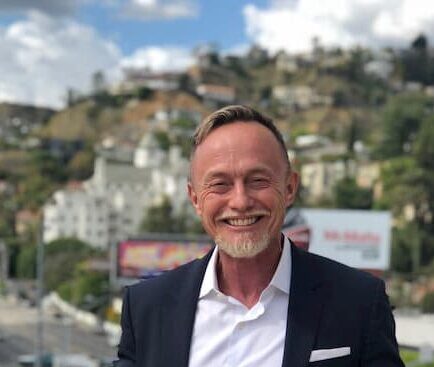 Simon Hobbs is a British- born American award-winning journalist residing in Los Angeles, freelancing and hosting conferences. He became an American citizen in 2018. Hobbs worked for business news channel CNBC for 18 years, first in London and then at the New York Stock Exchange.

He is best known for working with CNBC being with the channel from 1998 to 2016. For five years, he was the anchor of the 10 a.m hour of Squawk on the Street until his departure from CBNC in July 2016.

Simon accepted the ALS ice water bucket challenge from Carnival CEO Arnold Donald on 18 August 2014 and was drenched by co-anchor Sara Eisen outside the NYSE. Hobbs in turn challenged the CEOs of Priceline, Marriott, and GoPro who all then accepted.

He joined CNBC after working for LBC news radio in the UK for 8 years. He had had a journey rising from reporter to executive producer, with stints at BBC Radio 4 and BBC Radio 1’s Newsbeat. For CNBC Europe, he originally co-anchored Squawk Box Europe and also anchored Europe Today, and its replacement Today’s Business was the first show to totally interact with new video wall technology.

He produced and anchored 66 episodes of the globetrotting interview series The Leaders from March 2007 to July 2009. The series was shown as inflight entertainment on 10 airlines and released by NBC Universal as both a DVD and for digital download. Hobbs was sent around the world to host live TV debates in conjunction with CNBC Europe’s two major advertisers, BT Global and Royal Dutch Shell. He then hosted international events for the European Union, World Bank, and UN agencies.

CNBC relocated him to their USA headquarters to prevent him from relaunching rival Bloomberg TV in 2009. At the time, the Financial Times wrote, “Anyone familiar with Simon Hobbs’ interviewing style will know that he is no corporate lackey. Quite the contrary, in fact — he’s tough, to the point”. He originally reported extensively across the US network on the unfolding European debt crisis, with fill-in anchor slots. This was until he was assigned co-anchoring duties on Squawk on the Street in 2011 where he co-hosted the program’s second hour.

Simon also delivered a daily wrap of the European Market Close at 11.30 am ET in addition to anchoring the 10 am ET hour for CNBC USA. He also covered CNBC’s travel beat, reporting extensively on the lodging and cruise line industries, along with the giant online travel agencies. Hobbs anchored two seasons of ‘Executive Vision’ sponsored by Credit Suisse. He made headlines when he challenged his CNBC colleague Jim Cramer on air during the Euro Zone crisis on 18 August 2011. This is after he inaccurately suggested that the French banks were about to go under, which could have had devastating consequences for the world’s financial system. Hobbs’s last day on CNBC was July 29, 2016.

Hobbs has not yet disclosed his age and there is also no information regarding his date of birth.

There is no available information regarding Hobbs’s father, mother, or siblings.

Hobbs holds a bachelor’s of science degree in economics from University College London.

No information is revealed regarding Hobbs’s wife or his dating life.

Simon Hobbs Squawk on the Street

Squawk on the Street is a business show on CNBC that follows the first 90 minutes of trading on Wall Street in the United States. The show debuted on December 19, 2005.

Hobbs joined the show on July 11, 2011, alongside an entirely new anchor team at the NYSE. Carl Quintanilla (previously co-anchor of Squawk Box), Melissa Lee (anchor of Fast Money and Options Action) and also Hobbs (previously a presenter on CNBC Europe) were appointed as the new anchor team. Jim Cramer who is Mad Money host joined Quintanilla and Lee as a contributor for the first hour, with Hobbs joining Quintanilla and Lee as a third anchor for the duration.

During his CNBC program “Squawk on the Street on June 27, 2014, he accidentally re-“outed” Apple CEO Tim Cook as gay. Cook was already “out,” based on his appearance in out.com’s Power List 2013. Tim Cook later publicly confirmed that he is gay in an opinion piece advocating for human rights and equality.

According to some sources, Hobbs was one of the best-paid journalists during his tenure with CNBC. His salary was however not revealed.

Hobbs is believed to worth millions of dollars since he has been working with big networks in the media industry hence higher pay. His net worth is not yet disclosed.