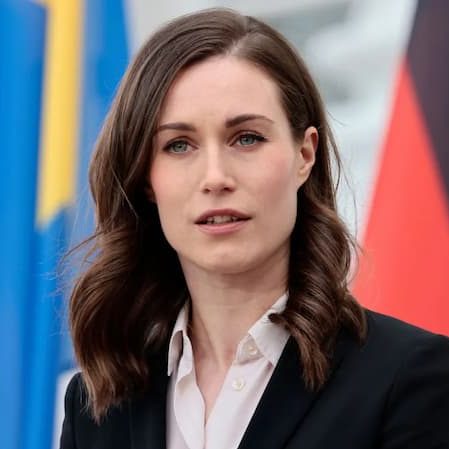 This article will answer every question you have about Sanna Marin. Below are some of the frequently asked questions about her.

Who is Sanna Marin?

Sanna Mirella Marin is a Finnish eminent politician who has served as the prime minister of Finland since 2019. She is a member of the Social Democratic Party of Finland (SDP) and since 2015 has been a Member of Parliament. Following Antti Rinne’s resignation in the wake of the postal strike controversy, on December 8, 2019, Marin was selected as prime minister. Thus taking office at the age of 34, and is the youngest person to hold the office in Finnish history, as well as the world’s third-youngest state leader after Dritan Abazovic of Montenegro and Gabriel Boric of Chile.

How Old Is Sanna Marin?

She is 36 years old as of August 2022, having been born on November 16, 1985, in Helsinki, Uusimaa, Finland. Marin shares her birthdate with celebrities such as; Pete Davidson, Jaime Adler, Mason Ramsey, Cindy Kimberly, Enzo Lopez, and many more.

Who are Sanna Marin’s Parents?

Does Sanna Marin have Siblings?

She received her high school education at Pirkkalan yhteislukio High School where she graduated at the age of 19 in 2004. After high school, she graduated with a bachelor’s and master’s degree in Administrative Science from the University of Tampere.

She and her husband Markus have one kid. A daughter by the name of Emma Amalia Marin (born in 2018).

Her political career was described by the BBC as “beginning at the age of 20” in the years following her high school graduation and beginning her affiliation with the Social Democratic Youth. In 2006, she joined the Social Democratic Youth and from 2010 to 2012, she was its first vice president. She then unsuccessfully ran for election in 2008 to the City Council of Tampere but stood again and was elected in the 2012 elections. From 2013 to 2017, she became chairman of the City Council within months.

In 2018, she was re-elected to the City Council. She first gained prominence after video clips of her charing contentious meetings were shared on YouTube. In 2014, she was elected second deputy chairman of the Social Democratic Party (SDP). Whereas in 2015 she was elected as an MP to the Finnish Parliament from the electoral district of Pirkanmaa. Later after four years, she was re-elected. On June 6, 2019, she became the Minister of Transport and Communications. The next year on August 23, she was elected chair of the SDP, succeeding Antti Rinne.

A Career as Prime Minister of Finland (2019 to present)

The Social Democratic nominated Marin in December 2019, to succeed Antti Rinne as the Prime Minister of Finland. But Antti formally remained party leader until June 2020. In a narrow margin, Marin prevailed over Antti Lindtman. In her five-party cabinet, a majority of the ministers are women numbering 12 out of 19 at the time of the cabinet’s formation. Moreover, she is the third female head of government in Finland after Anneli Jaatteenmaki and Mari Kiviniemi.

Upon her confirmation by Parliament at the age of 34, she became Finland’s youngest-ever prime minister. And also was the youngest serving state leader until Sebastian Kurz regained that description in January 2020. In 2020, during the global COVID-19 pandemic, her cabinet invoked a state of emergency in Finland to alleviate the epidemic. Furthermore, when Swedish prime minister Stefan Lofven could not attend a European Council meeting, she stepped in to represent Sweden. Later that month, Marin asked Stefan to represent Finland at a Council meeting.

At the start of 2022, Marin stated in a new year address that Finland had the right to join NATO if it wanted to, and should consider this option. This however caused negative reactions from the Russian media with some outlets reporting that “Moscow was stabbed in the back”. Following the 2022 Russian invasion of Ukraine in February, Marin commented on Finland’s potential membership, observing: “It is also now clear that the debate on NATO membership in Finland will change” while noting that a Finnish application to NATO would require widespread political and public support. Because of this, Russian president Putin ordered the Russian Armed Forces on February 24, 2022, to begin an invasion of Ukraine.

The president of Finland Sauli Niinisto visited Washington, D.C. on March 4, 2022, to meet with President Joe Biden and a number of other U.S. politicians and security personnel. Ten weeks after the beginning of the invasion on May 12, 2022, President Niinisto and Prime Minister Marin in a joint statement said that “Finland must apply for NATO membership without delay” as such membership “would strengthen Finland’s security”. Furthermore, Niinisti and Marin announced on May 15, that Finland will apply for NATO membership, and on May 17, the Finnish parliament approved the proposal 188-8.

Sanna Marin’s Salary and Net Worth