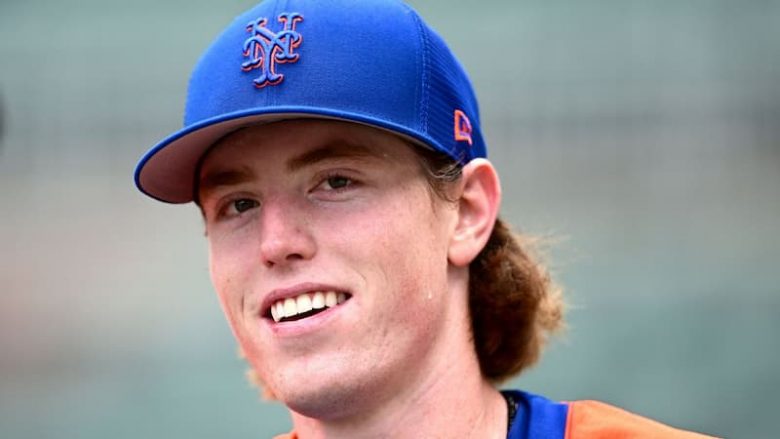 This article will answer every question you have about Brett Baty. Below are some of the frequently asked questions about him.

Who is Brett Baty?

Brett Austin Baty is a professional American well-known baseball third baseman for the New York Mets of MLB (Major League Baseball). He was selected by the Mets in the first round of the 2019 MLB draft. In 2022, he made his MLB debut.

How Old Is Brett Baty?

He is 22 years old as of August 2022, having been born on November 13, 1999, in Round Rock, Texas, U.S. Brett shares his birthdate with celebrities such as; FGTeeV Mike, Lando Norris, Fernanda Gimenez, Jimmy Kimmel, 24KGoldn, and many more.

Who are Brett Baty’s Parents?

He was born to Clint Baty (Father) and Leslie Baty (Mother).

Does Brett Baty have Siblings?

He has a sister by the name of Lauren Baty.

He received his high school education at Lake Travis High School. After high school, he committed to attending the University of Texas.

While attending Lake Travis High School, where he played basketball, baseball, and football. As a senior, he hit .615 with 19 home runs and 50 RBIs. Because of this, he was named the Gatorade Texas Baseball Player of the Year. After his career in high school, he committed to playing college baseball at the University of Texas.

The New York Mets selected Brett in the first round (12th overall) of the 2019 Major League Baseball draft. There, he signed for $3.9 million and was assigned to the Gulf Coast League Mets. After playing there for five games, he was promoted to the Kingsport Mets before being promoted to the Brooklyn Cyclones. Overall between the three teams, he played in over 51 games where he batted .234/.368/.452 with seven home runs and 33 RBIs. To begin 2021, he returned to Brooklyn and in Jun he was selected to play in the All-Star Futures Game. Following the game, he was promoted to the Binghamton Rumble Ponies. In over 91 games between the teams, he slashed .292/.382/.473 with 12 home runs, 56 RBIs, and 22 doubles.

He went on to begin the 2022 season with Binghamton and was then promoted to the Syracuse Mets in August. On August 17, 2022, he was called up to the major league. This was due to inuries of Eduardo Escobar and Luis Guillorme. In his first major league at-bat, he hit a home run on a curveball from Jake Odorizzi. Moreover, he became only the fifth Mets player to homer in his first career MLB at bat. Overall, Brett ended up going 1-for-4 with two RBIs, including a 113 mph groundout that was the hardest hit ball by a Mets left-handed hitter off a lefty pitcher since 2016.

Brett Baty’s Salary and Net Worth