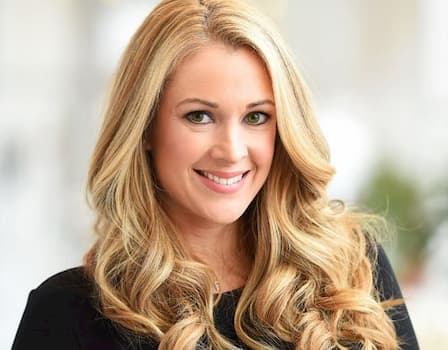 Nicole Briscoe (born: Nicole Manske) is an American sportscaster employed by ESPN. She became a SportsCenter anchor and studio show host in early 2015. This is after working in various roles in ESPN’s NASCAR coverage from 2008-2014.

Nicole attended Hononegah High School from where she graduated in 1998. Nicole and future auto racer Danica Patrick were cheerleaders in the school in 1996. She then joined Northern Illinois University in Dekalb, Illinois

She won the Miss Illinois Teen USA 1998 and in August 1998 competed in the Miss Teen USA pageant in Shreveport, Louisiana. Briscoe was then a semi-finalist in the pageant, placing third (of 10) in the evening gown competition, seventh in a swimsuit, and tenth in an interview, placing her eighth overall on average. Nicole competed in the Miss Illinois USA 2001 pageant two years after passing on her title and she placed first runner-up to Rebecca Ambrosi.

Nicole earned her first job while at Northern Illinois for WREX-TV, the NBC station in Rockford. She then worked as a general assignment reporter for WANE-TV in Fort Wayne, Indiana, before going to WISH-TV in Indianapolis, Indiana, in April 2004. She covered the Indianapolis 500, the United States Grand Prix, the NFL’s Indianapolis Colts, and the NBA’s Indiana Pacers during her career at WISH-TV.

Nicole was a pit reporter for the Indianapolis Motor Speedway Radio Network. She announced in the May 15, 2006, edition of The Indianapolis Star that she would be leaving WISH-TV for Speed Channel in Charlotte, North Carolina. The 2006 Indianapolis 500 on May 28 would be her last day.

Nicole has been married to Australian-American professional racing driver Ryan Briscoe since 2009. The couple married in an outdoor ceremony in Hawaii. Ryan has raced open-wheel and sports cars in Europe and America. He became a naturalized American citizen as seen on Nicole’s Instagram posts.

She replaced Connie LeGrand as co-host of The Speed Report (formerly Speed News), a Sunday motorsports program on Speed Channel. Briscoe hosted the show from July 1, 2006, to January 27, 2008. She left to become the new host of the daily news show NASCAR Now on ESPN2.

In August 2014, Briscoe signed a new contract with Espn to become a “SportsCenter” anchor and take on new assignments. She previously co-hosted the NASCAR pre-race shown on ESPN/ABC from 2008 to 2014.

Briscoe has added weight over the years but this could be probably after giving birth to her children.