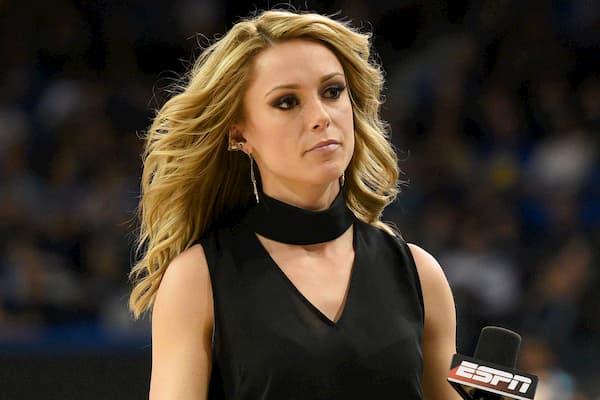 Molly McGrath is an American journalist who serves as a sportscaster and studio host. She is a sideline reporter for ESPN’s college football and college basketball telecasts.

An executive from Fox Sports found clips of McGrath’s work on YouTube while she was working for the Celtics. The executive contacted her via Facebook about a potential job opportunity with the network. In the summer of 2013, she was among several initial hires by Los Angeles-based Fox Sports 1.

She was originally hired as an update anchor but quickly rose through the ranks. Molly joined Mike Hill as a co-host and anchor on the daily sports highlight show, America’s Pregame in 2014. She was also the lead sideline reporter for Fox College Football and Fox College Basketball. Molly covered games for the Fox NFL. She hosted the return of the revived show Battlebots on ABC, for its sixth season in 2015.

Mcgrath worked at ESPN as a production assistant. She logged play-by-plays, produced highlights, and other support tasks for various ESPN shows but she later left.

She returned to ESPN as a college sports sideline reporter and co-host of College Football Live in the summer of 2016. Molly worked the sidelines of ESPN College Football Friday Primetime games for the 2017 college football season. She worked alongside Mack Brown and Adam Amin. Molly also covered the sidelines for ESPN’s College Basketball telecasts.

McGrath was born to Michael McGrath and Deborah McGrath. Michael McGrath is of Irish ancestry and her mother is of Mexican-Spanish descent. She has an older brother Patrick, who played football at Princeton University. She grew up in Burlingame, California.

While she was at college, she was a cheerleading captain, McGrath pitched the athletic director to let her interview athletes and coaches for the college’s website, BCEagles.com. The interviews helped her put together a reel which she used to help secure her first on-air job. She also interned at NESN and WHDH-TV while at BC.

Molly met Max Dorsch a commercial real estate investment professional in Los Angeles and they started dating shortly later. She announced their engagement in June 2017 through an Instagram post. The couple got married in 2018. They live in Seattle and their rescue dogs, Stewart and Matthew.

Mcgrath is believed to earn much in her broadcasting career but has not yet disclosed her salary.