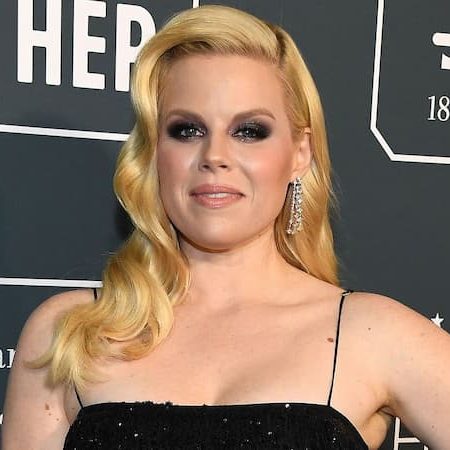 This article will answer every question you have about Megan Hilty. Below are some of the frequently asked questions about her.

Who is Megan Hilty?

Megan Kathleen Hilty is an American prominent actress and singer. She rose to prominence for her roles in Broadway musicals including her performance in Wicked as Glinda the Good Witch, Doralee Rhodes in 9 to 5: The Musical, and her Tony Award-nomination role as Brooke Ashton in Noises Off. Moreover, she has starred in the musical-drama series, Smash as Ivy Lynn, on which she sang the Grammy Award-nominated “Let Me Be Your Star” and portrayed Liz on the sitcom Sean Saves the World.

How Old Is Megan Hilty?

She is 41 years old as of September 2022, having been born on March 29, 1981, in Bellevue, Washington, U.S. Megan shares her birthdate with celebrities such as; CJ So Cool, Jack Wright, Mark Thomas, Kelianne Stankus, Juanpa Zurita, and many more.

Who are Megan Hilty’s Parents?

She was born to Jack Hilty (Father) and Donna Hilty (Mother).

Does Megan Hilty have Siblings?

Her sister, Lauren (pregnant) died on September 4, 2022, in the Puget Sound plane crash.

She received her high school education at Sammamish High School, transferred to the Washington Academy of Performing Arts Conservatory High School, and later attended the Chrysalis School. After high school, she graduated in 2004 from the Carnegie Mellon School of Drama.

She is currently married to the love of her life, Brian Gallagher. They married on November 2, 2013. However, she was previously married to Steve Kazee (born on October 30, 1975) an American actor and singer, they were married from 2005 until 2012.

Shortly before graduating from Carnegie Mellon University, she auditioned for the musical Wicked. After graduating, she moved to New York City and in August 2004, she made her Broadway debut as the standby for Glinda the Good Witch before taking over the role from Jennifer Laura Thompson on May 31, 2005. After playing the role for a year, she ended her run on May 28, 2006, and was succeeded by Kate Reinders. From September through December 2006, reprised the role on her first national tour of the show replacing Kendra Kassebaum.

Soon after, she originated the role in the Los Angeles sit-down production which began previews on February 10, 2007, and opened on February 21. She left the production on May 18, 2008, and was replaced by Erin Mackey only to return on October 31, 2008. Next, she then starred in the musical Vanities during its premiere engagement at the Mountain View Center for the Performing Arts in Mountain View, California. In addition to her stage work, she has made guest appearances on television shows including; The Closer, The Suite Life of Zack & Cody, Ugly Betty, CSI: Crime Scene Investigation, Desperate Housewives, and Shark. She joined Allison Janney, Stephanie J. Block, and Marc Kudisch in 2008, in the musical adaptation of the 1980 film 9 to 5.

Moreover, she participated in workshops and readings as the character Doralee Rhodes (the character Dolly Parton had played in the film version). On April 7, 2009, the musical began preview performances on Broadway at the Marquis Theatre with an official opening on April 30, 2009, closing on September 6, 2009. Because of this role, she was nominated for the Outer Critics Circle Award for Outstanding Actress in a Musical, the Drama League Award for Distinguished Performance, and the Drama Desk Award for Outstanding Actress in a Musical. The next year, she appeared in an episode of CSI: Crime Scene Investigation entitled “Deep Fried and Minty Fresh”. There, she played a fast food manager helping out with a murder at Choozy’s Chicken.

And has also appeared in two episodes of Desperate Housewives as the other woman to Carlos’ boss. In December 2009, she lent her talents in Rated RSO: The Music and Lyrics of Ryan Scott Oliver. This was alongside Lesli Margherita, Steve Kazee, Morgan Karr, Natalie Weiss, and others. In 2010, she confirmed that she would voice the character of the China Princess in the animated film Dorothy of OZ. It was announced in 2011, that she was cast in the NBC musical-drama series Smash opposite Anjelica Huston, Brian d’Arcy James, and Debra Messing. On February 6, 2012, the series premiered and aired for two seasons. Next, she appeared in Gentlemen Prefer Blondes in May 2012. There, she appeared as part of the Encores! staged concert series. And went on to appear alongside Brennan Brown, Simon Jones, and Rachel York, as Lorelei Lee.

Because of her performance, she received rare reviews with The New York Times rating her performance on a par with those of Carol Channing and Marilyn Monroe. It was announced in November 2012, that Megan would appear on the album I’m Ready: The Songs of Rob Rokicki. On March 12, 2013, she released her debut solo album, It Happens All the Time. It was announced on June 13, 2013, that she would star in the NBC sitcom Sean Saves the World alongside Sean Hayes. It was reported in July 2015, that she would return to Broadway. In the Roundabout Theatre Company’s revival of Noises Off portraying Brooke Ashton. Because of her performance, she received nominations for Tony Award.

For Best Featured Actress in a Play, the Drama Desk Award for Outstanding Featured Actress in a Play. And the Drama League Award for Distinguished Performance. That same year, she recurred as Charlene on Girlfriends’ Guide to Divorce. On July 7, 2016, she appeared for an evening with The New York Pops alongside Matthew Morrison at the Forest Hills Stadium in Queens. It was announced in November 2021, that she would be playing Lily St. Regis in NBC’s Annie Live! She replaced Jane Krakowski who withdrew from the show after a getting breakthrough case of COVID-19.

Megan Hilty’s Salary and Net Worth