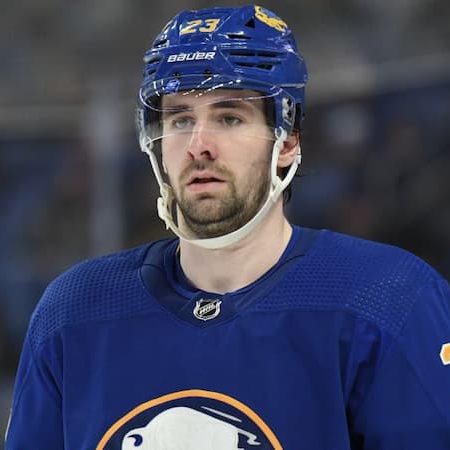 This article will answer every question you have about Mattias Samuelsson. Below are some of the frequently asked questions about him.

Who is Mattias Samuelsson?

Mattias Samuelsson is a professional American ice hockey defenseman currently playing for the Buffalo Sabres of the NHL (National Hockey League). While in college, he played college hockey at Western Michigan.

How Old Is Mattias Samuelsson?

He is 22 years old as of October 2022, having been born on March 14, 2000, in Voorhees, New Jersey, U.S. Mattias shares his birthdate with celebrities such as; Stephen Curry, Albert Einstein (1879-1955), Chrisean Malone, Simone Biles, CookieSwirlC, and many more.

Who are Mattias Samuelsson Parents?

Does Mattias Samuelsson have Siblings?

He has three siblings by the name, of Alexandra, Gabriella, and Lukas.

He received his education at Western Michigan University.

He played three seasons in the development program for the United States National Hockey Team. Moreover, he was part of the team that won a silver medal at the 2019 World Junior Ice Hockey Championships. And as captain of the team at the 2020 World Junior Ice Hockey Championships. He was drafted in the fourth round of the 2016 Ontario Hockey League Draft by the Sarnia Sting. However, he chose not to play there.

Originally after committing to the University of Michigan, he de-committed and thus went to Western Michigan instead. At Western Michigan, he played two seasons where he scored 7 goals and 19 assists. Moreover, he was an alternate captain for the team in his sophomore year despite being the youngest player on the team.

He was drafted by the Buffalo Sabres in the second round, 32nd overall in the 2018 NHL Draft. On March 25, 2020, he signed a three-year contract with the Sabres. On April 18, 2021, he made his NHL debut with the Sabres in a game against the Pittsburgh Penguins.

Mattias Samuelsson’s Salary and Net Worth