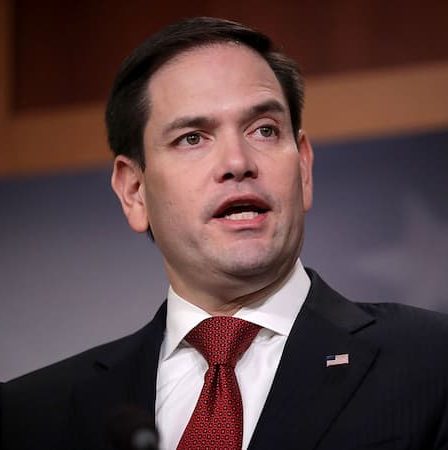 This article will answer every question you have about Marco Rubio. Below are some of the frequently asked questions about him.

Who is Marco Rubio?

Marco Antonio Rubio is an American well-known politician and lawyer serving as the senior United States senator from Florida and has held the seat since 2011. Being a member of the Republican Party, he served as Speaker of the Florida House of Representatives from 2006 to 2008. In 2016, he unsuccessfully sought the Republican nomination for President of the United States winning presidential primaries in Minnesota, the District of Columbia, and Puerto Rico.

In the 1990s, he served as a city commissioner for West Miami and was elected to represent the 111th district in the Florida House of Representatives in 2000. Subsequently, he was elected speaker of the Florida House where he served for two years beginning in November 2006. In 2008, upon leaving the Florida legislature due to term limits, he taught at Florida International University.

In 2010, he was elected to the U.S. Senate. And in April 2015, he decided to run for president instead of seeking reelection to the Senate. On March 15, 2016, he suspended his campaign for the presidency after losing the Florida Republican primary to the eventual winner of the presidential election, Donald Trump. Thus he decided to run for reelection to the Senate and was successful as he won a second term later that year. During the 2016 Republican presidential primary campaign in which Rubio and Trump were opponents, Rubio was critical of Trump. However, before the 2016 general election, Rubio endorsed Trump and was largely supportive of Trump during his presidency.

How Old Is Marco Rubio?

Who are Marco Rubio’s Parents?

He was born to Mario Rubio (Father, who died on September 4, 2010) and Oriales Rubio (Mother).

Does Marco Rubio have Siblings?

He has three siblings by the name Veronica Rubio ( a photographer), Barbara Rubio, and Mario Rubio.

He is married to the love of his life Jeanette Dousdebes Rubio (born on December 5, 1973) an American former cheerleader. They married in 1998.

Before venturing into politics, he interned for U.S. Representative Ileana Ros-Lehtinen while he was studying law. Moreover, he worked on Republican senator Bob Dole’s 1996 presidential campaign. Two years after finishing law school, in April 1998 he was elected to a seat as city commissioner for West Miami. In early 2000, he became a member of the Florida House of Representatives.

A Career in the Florida House of Representatives

A special election was called in late 1999 to fill the seat for the 111th House District in the Florida House of Representatives representing Miami. This was considered a safe Republican seat, so Rubio’s main challenge was to win the GOP nomination. Thus he campaigned as a moderate, advocating tax cuts and early childhood education. On December 14, 1999, he placed second in the Republican primary but won the run-off election for the Republican nomination.

A Career as Majority Whip and Majority Leader

The majority leader of the House, Mike Fasano promoted Rubio later in 2000, to be one of two majority whips. In September 2001, Fasano resigned as majority leader of the House due to disagreements with the House speaker. Because of this reason, the speaker passed over Rubio to appoint a more experienced replacement for Fasano. In December 2002, he was appointed House majority leader by Speaker Johnnie Byrd. As a state representative, he requested legislative earmarks (called “Community Budget Issue Requests” in Florida) totaling about $145 million for 2001 and 2002.

A Career as House Speaker

At age 34, he became a speaker on September 13, 2005, after State Representatives Dennis Baxley, Jeff Kottkamp, and Dennis A. Ross dropped out. A year later in November 2006, he was sworn in. Thus he became the first Cuban American to be speaker of the Florida House of Representatives and would remain speaker until November 2008. In 2005, when he was chosen as a future speaker, he delivered a speech to the House in which he asked members to look in their desks where they each found a hardcover book titled 100 Innovative Ideas For Florida’s Future. He took office as Speaker in January 2007, when Jeb Bush was completing his term as governor and Bush left office. Jeb Bush was succeeded by Charlie Crist a moderate Republican who took office in January 2007.

In 2008 after he left the Florida Legislature, he began teaching under a fellowship appointment at Florida International University (FIU) as an adjunct professor. After he joined the U.S. Senate in 2011, he rejoined the FIU faculty. There, he teaches n the Department of Politics and International Relations which is part of FIU’s Steven J. Green School of International and Public Affairs.

On May 5, 2009, he stated his intent to run for the U.S. Senate seat being vacated by Mel Martinez who had decided not to seek re-election and subsequently resigned before completing his term. Thus in his campaign, he received the support of members of the Tea Party many of whom were dissatisfied with Crist’s policies as governor. However, Charlie Crist stated on April 28, 2010, that he would be running without a party affiliation effectively ceding the Republican nomination to Rubio. Rubio went on to win the general election held on November 2, 2010, with 49% of the vote to Crist’s 30% and Democrat Kendrick Meek’s 20%. Thus when he was sworn into the U.S Senate, he and Bob Menendez of New Jersey were the only two Latino Americans in the Senate.

In April 2015, he decided to run for president instead of seeking re-election to the Senate. On March 15, 2016, he suspended his presidential campaign as he seemed to open the door to running for re-election on June 13, 2016. On August 30, 2016, he won the Republican primary where he defeated Carlos Beruff. In the general election, he faced Democratic nominee Patrick Murphy defeating him with almost 52% of the vote.

A Career in the 2016 Presidential Campaign

In April 2014, he said that he would not run for both the Senate and president in 2016 as Florida law prohibits a candidate from appearing twice on a ballot. Later, he indicated that even if he would not win the Republican nomination for president, he would not run for reelection to the Senate. It was reported in January 2015, that Rubio had begun contracting top donors and appointing advisors for a potential 2016 run including George Seay who previously worked on such campaigns as Rick Perry’s in 2012 and Mitt Romney’s in 2008.

A Career in the Republican Primaries

In the first Republican primary, the February 1 Iowa caucuses Rubio finished third behind candidates Ted Cruz and Donald Trump. On February 6, 2016, during a nationally televised debate among Republican candidates in New Hampshire, Rubio was criticized by rival Chris Christie for speaking repetitiously and sounding scripted. On February 20, in the third Republican contest, he finished second but did not gain any delegates as Trump won all of South Carolina’s congressional districts and thus delegates. At another Republican debate on February 25, he repeatedly criticized frontrunner candidate Donald Trump. However, Rubio suspended his campaign on March 15, after placing second in his own home state of Florida. On March 17, he ruled out runs for the vice-presidency governorship of Florida and even re-election for his senate seat.

He supports balancing the federal budget while prioritizing defense spending. Thus he rejects the overwhelming scientific consensus on climate change which is that climate change is real. Moreover, he is an outspoken opponent of abortion and he said that he would ban it even in cases of rape and incest but with exceptions if the mother’s life is in danger. He also supports corporate taxes at 25% reforming the tax code and capping economic regulations. He and other 16 other members of Congress urged the United States on August 28, 2018, to impose sanctions under the Global Magnitsky Act against Chinese officials.

Marco Rubio’s Salary and Net Worth