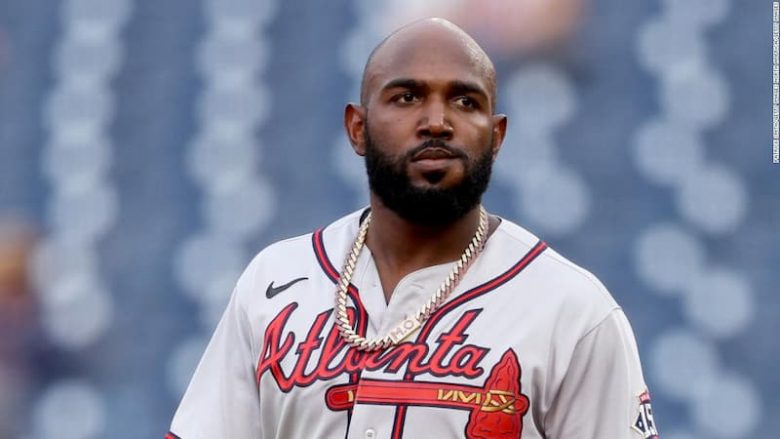 This article will answer every question you have about Marcell Ozuna. Below are some of the frequently asked questions about him.

Who is Marcell Ozuna?

Marcell Ozuna Idelfonso nicknamed “The Big Bear” is a professional Dominican notable baseball outfielder for the Atlanta Braves of MLB (Major League Baseball). Previously, he played in MLB for the Miami Marlins and St. Louis Cardinals. In 2013, he made his MLB debut with the Marlins.

How Old Is Marcell Ozuna?

He is 31 years old as of August 2022, having been born on November 12, 1990, in Santo Domingo, Distrito Nacional, Dominican Republic. Ozuna shares his birthdate with celebrities such as; Erika Costell, NayVee Nelson, Anne Hathaway, Ryan Gosling, Dr. Mike, and many more.

Who are Marcell Ozuna’s Parents?

He was born to Marcelino Ozuna (Father) a former painter, and Adriana Idelfonso (Mother) a housekeeper.

Does Marcell Ozuna have Siblings?

He has three siblings. One brother and two sisters. However, his siblings’ names and whereabouts are unknown.

He is married to the love of his life, Genesis Guzman.

He and his wife Genesis have three kids. However, his kids’ names are not mentioned on the internet.

The Florida Marlins signed Ozuna on February 15, 2008, as an international free agent with a $49,000 bonus. That year, he played for the Dominican Summer League (DSL) Marlins where he played in 63 games and hit .279 with six home runs and 43 runs batted in (RBIs), and eight stolen bases. The next year, he played for the GCL Marlins where in 55 games he hit .313 with five home runs and 39 RBIs. He went on to begin 2010 with the Greensboro Grasshoppers of the Class A South Atlantic League. However, he was sidelined after six appearances with an injured wrist. But returned in June with Short Season Jamestown where he finished the season.

Ozuna made his first major league debut on April 30, 2013, and recorded his first career hit, a single off Jeremy Hefner of the New York Mets. When Stanton returned, Ozuna became the starting center fielder. However, he was optioned back to Jacksonville on July 22, but instead of joining Jacksonville, he was placed on the 15-day disabled list due to a ligament tear and avulsion fracture in his left thumb. On July 26, 2013, he underwent season-ending thumb surgery. Overall in 2014, he played a total of 153 games where he batted .269 with 23 home runs and 85 RBIs. He then tied a franchise record with home runs in four consecutive games on September 11, 2014.

The Marlins traded Ozuna to the St. Louis Cardinals on December 14, 2017, for Sandy Alcantara, Magneuris Sierra, Zac Gallen, and Daniel Castano. It was announced on January 12, 2018, that the Cardinals and Ozuna reached an agreement on a one-year $9 million contract. In a 3-2 victory versus the Pittsburgh Pirates, he hit his 100th career home run off Chad Kuhl on June 2, 2018, and a first home run at Busch Stadium as a member of the Cardinals.

A Career with the Atlanta Braves (2020 to present)

He signed a one-year contract worth $18 million with the Atlanta Braves on January 21, 2020. On an opening Day on July 24, he was the starting left fielder. He then became the first National League player on September 1. As he hit three home runs in one game at Fenway Park and also reached 1,000 MLB career hits.

Overall in 2020, he batted .338/.431/. 636 (each 3rd in the NL) with an NL-leading 18 home runs, 56 RBIs, and 145 total bases during the shortened 60-game season. He won his second Silver Slugger Award after the 2020 season. Ozuna then re-signed with the Braves on February 5, 2021, with a four-year $64 million deal. However, he was put on administrative leave on September 9, this was due to domestic violence allegations. And thus he did not play for the remainder of the season. Moreover, the Braves, finished with an 88-73 record thus clinching the NL East, and eventually won the 2021 World Series their first title since 1995.

Marcell Ozuna’s Salary and Net Worth

He has an annual salary of $18 million and an estimated net worth of $12 million.