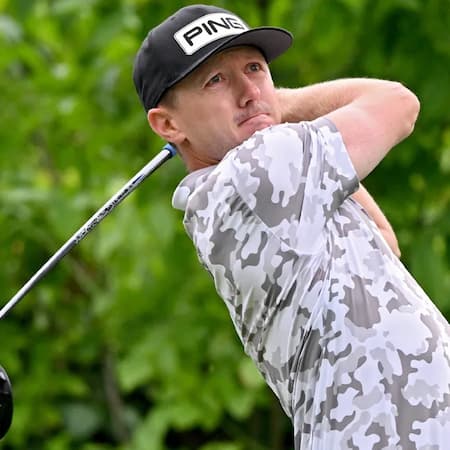 This article will answer every question you have about Mackenzie Hughes. Below are some of the frequently asked questions about him.

Who is Mackenzie Hughes?

How Old Is Mackenzie Hughes?

He is 31 years old as of October 2022, having been born on November 23, 1990, in Hamilton, Ontario, Canada, Mackenzie shares his birthdate with celebrities such as; Avani Gregg, Miley Cyrus, Alan Stokes, Alex Stokes, Brittany Xavier, and many more.

Who are Mackenzie Hughes’s Parents?

He was born to Jeffery Hughes (Father) and Sandra Hughes (Mother).

Does Mackenzie Hughes have Siblings?

He has a sister by the name of Jessica Thurley

He graduated from Kent State University.

He is married to the love of his life, Jenna Shaw. They married in 2016.

He and his wife Jenna have two kids. Two sons by the name, of Kenton and Cohen.

He turned professional in 2012 and played on the eGolf Professional Tour and PGA Tour Canada. In 2012 and 2013, he played in Canadian Opens but missed the cut in both events. In June 2013, he qualified for the U.S. Open winning a playoff at his sectional qualifying site. At the 2013 Cape Breton Celtic Classic, he won his first professional tournament on PGA Tour. That same year, he went on to win the 2013 PGA Tour Canada Order of Merit and earn a Web.com Tour card for 2014, fully exempt as the money leader.

He has made seven cuts in twenty events finishing well outside retaining any status. After spending the 2015 season on PGA Tour Canada, he went on to earn Web.com Tour status for 2016 through Q School. He won the Price Cutter Championship en route in August 2016, to graduating for the 2016-17 season. That same year in November, he won the RSM Classic in his fifth PGA Tour. The win made him become the first Canadian-born golfer to win the PGA Tour since Nick Taylor at the 2014 Sanderson Farms Championship. Moreover, it made him the first to win a non-alternative event since Mike Weir at the 2007 Fry’s Electronics Open.

Furthermore, he was the first rookie in over 20 years (Tim Herron at the 1996 Honda Classic) to win wire-to-wire. In 2017, he finished 10th at the AT&T Pebble Beach Pro-Am, 16th at The Players Championship, and 13th at the Dell Technologies Championship. In March 2019, he finished tied for second at the PGA Tour’s Corales Puntacana Resort and Club Championship. However, he lost one stroke to winner Graeme McDowell. The next year in March, he finished second at The Honda Classic, finishing one stroke behind champion Im Sung-jae.On the weekend, he shot, 66-66.

Whereas in June of 2020, he tied for third place in the Travelers Championship and entered the top 100 in the world rankings for the first time. At the 2021 U.S. Open, he held the lead after the third round but finished T15. Also, he was in contention at the 2021 Open Championship eventually finishing T6 and recording the best ever finish for a Canadian at The Open Championship. He won his second PGA Tour title in October 2022, at the Sanderson Farms Championship in a playoff over Sepp Straka.

Mackenzie Hughes’s Salary and Net Worth