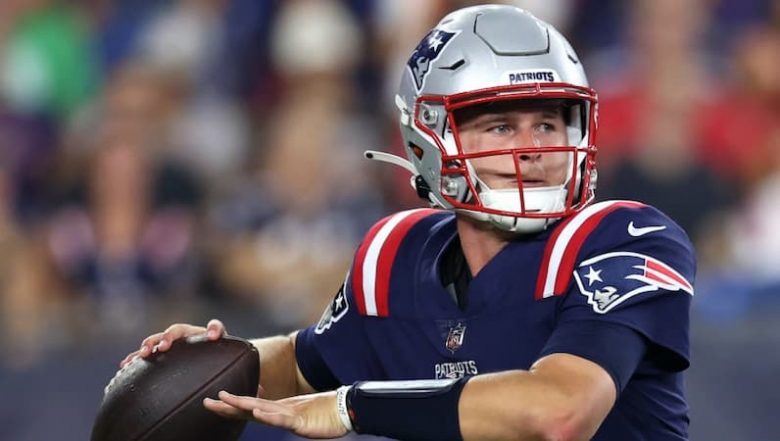 This article will answer every question you have about Bailey Zappe. Below are some of the frequently asked questions about him.

Who is Bailey Zappe?

Bailey Michale Zappe is a professional American quarterback for the New England Patriots of the NFL (National Football League). He played his first three seasons of college football at Houston Baptist and used his last year of eligibility at Western Kentucky. While at Kentucky he set the FBS season records for passing yards and passing touchdowns. He was selected in the fourth round of the 2022 NFL Draft by the Patriots.

How Old Is Bailey Zappe?

He is 23 years old as of October 2022, having been born on April 26, 1999, in Victoria, Texas, U.S. Bailey shares his birthdate with celebrities such as; Anna McNulty, Channing Tatum, Melania Trump, Paige Niemann, Payton Yeager, and many more.

Who are Bailey Zappe Parents?

He was born to Michael Zappe (Father) and Sammie Zappe (Mother).

Does Bailey Zappe have Siblings?

He has a brother by the name of Trent Zappe.

He is in a relationship with his girlfriend, Hannah Lewis.

As a senior at Victoria East High School, he passed for 3,770 yards and 37 touchdowns while rushing for 633 yards and scoring 15 touchdowns. However, he was not heavily recruited and committed to playing college football at Houston Baptist which was the only scholarship offer.

A Career at Houston Baptist

In his first year at Houston Baptist, he started nine games, passing for 1,548 yards with five touchdowns and 10 touchdowns. As a junior, he went on to complete 357-of-560 passes for 3,811 yards with 35 touchdowns and 15 interceptions. In his next season as a senior, he passed for 1,833 yards and 15 touchdowns against one interception in four games in a shortened season after the Southland Conference fall football season was canceled due to the COVID-19 pandemic. Following the end of the season, he entered the transfer portal.

A Career at Western Kentucky

He committed to transfer to Western Kentucky following former HBU offensive coordinator Zach Kittley. Going into the 2021 season, he was named the Hilltoppers’ starting quarterback. In his first start for Western Kentucky, he passed for 424 yards and 7 touchdowns in a 59-21 win over Tennessee-Martin. During the 2021 regular season, he led the Football Bowl Subdivision (FBS) in passing yards with 5,545 and touchdowns with 56. In a game against the Appalachian State Mountaineers in the 2021 Boca Raton Bowl, he broke records finishing the season with 5,967 passing yards and 62 touchdowns.

He was selected by the New England Patriots in the fourth round of the 2022 NFL Draft with the 137th overall pick. For the 2022 season, he was named the third-string quarterback behind starter Mac Jones and second-string backup Brian Hoyer. However, after Jones suffered an ankle injury in Week 3, Bailey was promoted to the backup behind Hoyer. After Hoyer was injured in Week 4 Bailey made his debut against the Green Bay Packers. He completed 10 of 15 passes for 99 yards and a touchdown in the 27-24 overtime loss.

Bailey Zappe Salary and Net Worth