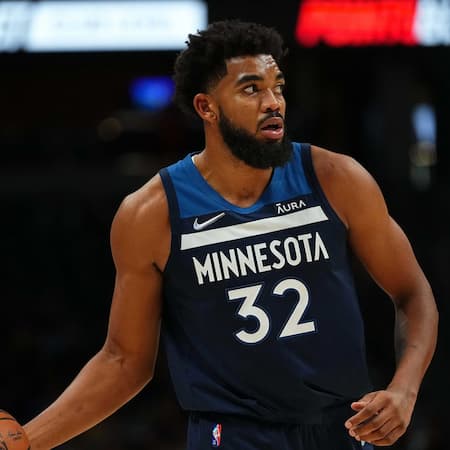 This article will answer every question you have about Karl-Anthony Towns. Below are some of the frequently asked questions about him.

Who is Karl-Anthony Towns?

Karl-Anthony Towns Jr is a well-known Dominican-American professional basketball player. He plays for the Minnesota Timberwolves of the NBA (National Basketball Association). During college, he played for the Kentucky Wildcats.

In the 2015 NBA draft, Anthony was selected with the first overall pick by the Minnesota Timberwolves. He was also named to the Dominican Republic national team while he was 16 years old. During the 2015-16 season, Anthony was named NBA Rookie of the year. Anthony has received three All-Star selections and also won the 2021-22 NBA Three-Point Contest.

How Old is Karl-Anthony Towns?

He is 26 years old as of February 2022 having been born on November 15, 1995, in Edison, New Jersey, U.S. Towns shares his birthdate with celebrities such as Jeffree Star, Jenny Popach, MatPat, Shailene Woodley, Jackson Passaglia, and many more.

Who is Karl-Anthony Towns Parents?

He was born to an African-American father, Karl Towns Sr, he played basketball for Monmouth University and coached basketball at Piscataway Technical High School. And Jacqueline Cruz, a Dominican mother.

Does Karl-Anthony Towns have any Siblings?

Anthony has two siblings and is both his sisters who go by the name Lachelle Towns and Malaika Singleton-Towns.

He received his high school education at St. Joseph High School. After high school, he enrolled at Kentucky University from 2014-2015. He studied Kinesiology for one year and hopes to become a doctor after he is a basketball player.

He is currently dating Jordyn Woods. They started dating in May 2020. Anthony has also been in a relationship with Kawahine Andrade (2016-2018).

Anthony doesn’t have a child or children. But in case of news regarding his kids, we will update it here as soon as possible.

A Career in High School

While at St. Joseph High School as a freshman, Anthony led the basketball team to a state championship in 2012 thereby earning himself the top position in the ESPN 25 national ranking of high school players. Towns led his high school team to state titles in 2013 and 2014. Anthony announced in December 2012 that he was going to reclassify as a senior and commit to playing on the Kentucky Wildcats men’s basketball team under coach John Calipari. Anthony recorded a quadruple-double with 16 points, 17 rebounds, 11blocks, and 11 assists on January 6, 2013, and on January 5, 2014, he recorded a second quadruple-double with 20 points, 14 rebounds, 12 blocks, and 10 assists. Towns was named the 2014 Gatorade Player of the Year.

A Career in college

Anthony in his freshman in college, Kentucky used a unique “platoon system” that limited the minutes of each player. Thereby Towns in this unique play system averaged 10.3 points and 6.7 rebounds in 21.1 minutes per game. The Associated Press and NABC named Towns a second-team All-American and a third-team All-American by Sporting News. Anthony and fellow Kentucky teammates Aaron Harrison, Andrew Harrison, Dakari Johnson, Devin Booker, Trey Lyles, and Wilie Cauley-Stein on April 9, 2015, all declared for the 2015 NBA draft.

A Career in Minnesota Timberwolves 2015-Present

Anthony was selected by the Minnesota Timberwolves on June 25, 2015, with the first overall pick in the 2015 NBA draft. And on July 7th, he signed a rookie scale contract with the Timberwolves. On October 28, Towns made his NBA debut in the Timberwolves’ season opener against the Los Angeles Lakers. In the game, he recorded 14 points and 12 rebounds as a starter in a 112-111 win. On December 3, Towns was named Western Conference Rookie of the Month for November. He was the seventh Timberwolves player to win the NBA Rookie of the Month honors. At the beginning of 2016, on January 20, 2016, Anthony had a season-best game with 27 points and career highs of 17 rebounds and 6 blocks in a 106-94 loss to the Dallas Mavericks.

On January 29, he recorded 32 points and 12 rebounds, he, therefore, became the youngest player to have 30 points and 10 rebounds in a game since Kevin Durant did so in 2008. He received his third consecutive rookie of the month honor on February 2nd for the month of January. In a 117-112 win over the Toronto Raptors, Anthony recorded a career-high 35 points, and three days later he won the 2016 NBA All-Star Weekend Skills Challenge over point guard Isaiah Thomas. He was therefore the tallest, heaviest, and youngest winner of the event. Towns was also named Western Conference Rookie of the Month of February on March 3, thereby becoming his fourth NBA Rookie of the month. In the 2015-16 season, Anthony won the NBA Rookie of the year. In addition, he also earned NBA All-Rookie First Team honors.

On the night Anthony turned 22, on November 15, 2017, he helped the Timberwolves end a 12-game losing streak to the San Antonio Spurs in a 98-86 win. He also earned Western Conference Player of the Week honors for games played from Monday, November 13 through Sunday, November 19. Towns was named a Western Conference All-Star reserve on January 23, 2018. Anthony set a record of 56 points and 15 rebounds on March 28, 2018, thereby surpassing the previous record set by Mo Williams of 52 points. In the season finale on April 11, 2018, Anthony had 26 points and 14 rebounds in a 112-106 overtime over the Denver Nuggets. The win clinched Timberwolves a spot in the playoffs for the first time since 2004. Anthony finished the season with 68 double-doubles the most in the NBA.

Anthony signed a five-year $190 million super-maximum extension with the Timberwolves on September 23, 2018. He started the season with a season-high 39 points and 19 rebounds on November 9th despite losing to the Sacramento Kings. On February 22, Anthony missed the first game of his career against the New York Knicks due to being placed in the concussion protocol following a car accident in Minnesota. Upon his return on February 25, he recorded 34 points and 21 rebounds in a 112-105 win over the Kings.

Anthony’s 2019-20 season began with bad luck as he was suspended for two games without a payment due to an altercation with Joel Embiid during a game with the Philadelphia 76ers on October 31, 2019.

During the worldwide pandemic, Anthony contracted COVID 19 in mid-January 2021. This resulted in him missing 13 games. After recovery, he returned to the court on February 10. He recorded 18 points and 10 rebounds despite losing to the Los Angeles Clippers.

Anthony started the season in a game-tying 39-foot three-pointer at the buzzer to tie the game at 113 and force overtime against the Memphis Grizzlies on November 8, 2021. Despite overtime, the Timberwolves fell short 125-118 loss where Towns finished with 25 points and 13 rebounds. In a 141-123 victory over the Houston Rockets on January 9, 2022, Anthony scored a season-high 40 points along with 9 rebounds. He went ahead and won the Mountain Dew NBA Three-Point contest in Cleveland on February 19, 2022, thereby defeating Luke Kennard and Trae Young in the final round.

Karl-Anthony Towns Salary and Net Worth

Due to him being a professional basketball player, he has a salary of $5.704 million and a net worth of $9million.