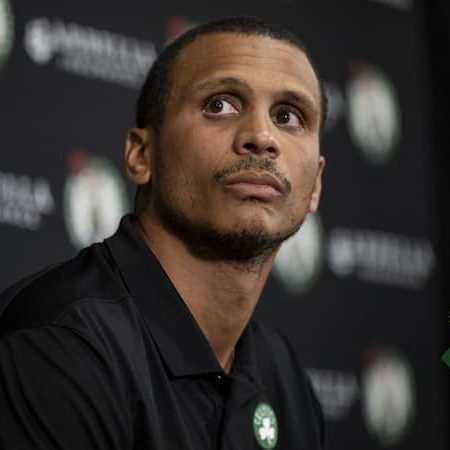 This article will answer every question you have about Joe Mazzulla. Below are some of the frequently asked questions about him.

Who is Joe Mazzulla?

Joseph Mazzulla abbreviated as Joe Mazzulla is a professional American basketball coach who is the head coach for the Boston Celtics of the NBA (National Basketball Association). While at college, he played college basketball for West Virginia University.

How Old Is Joe Mazzulla?

He is 34 years old as of October 2022, having been born on June 30, 1988, in Johnstone, Rhode Island, U.S. Joe shares his birthdate with celebrities such as; Mike Tyson, TinaKitten, Cheryl Ann Tweedy, ImDavisss, Michael Phelps, and many more.

Who are Joe Mazzulla Parents?

Does Joe Muzzulla have Siblings?

He has a younger brother by the name of Justin, who played basketball at George Washington before transferring to Vermont.

He is married to the love of his life Camai Muzzulla.

He and his wife Camai have two kids. However, his kids’ names are not mentioned on the internet.

He attended Bishop Nendricken High School where he made the all-state first team. There, he won three state titles at Bishop Hendricken with his third as a senior on a last-second shot.

At West Virginia as a freshman, he helped the team win the 2007 National Invitation Tournament under coach John Beilein. In the 2008 NCAA Tournament, he posted 13 points, 11 rebounds, and 8 assists in a second-round upset of Duke. However, due to a shoulder injury against Ole Miss, he was forced to redshirt the 2008-09 season, as his growth plate never fused with his shoulder. He was unsure if he would ever play again but practiced for two hours a day and underwent risk surgery.

However, he was arrested in April 2009, for domestic battery at a bar in Morgantown, West Virginia, and was thus suspended by coach Bob Huggins. As a redshirt junior, he was named a captain and helped West Virginia reach 2010 Final Four. In the Elite Eight upset of Kentucky, he scored 17 points. As a senior, he averaged 7.7 points and 3.8 rebounds per game. Overall in his college career, he scored 700 points and dished out 340 assists.

Shortly after graduating from college, he was offered a coaching job at Nova Southeastern. However, he turned down the offer in order to pursue professional opportunities. But he did not find any suitable opportunities overseas and in September 2011, he joined Glenville State as an assistant. In 2013, he was hired as an assistant at Fairmont State under Jerrod Calhoun. During the 2016-17 season, he served as an assistant for the Maine Red Claws of the NBA G League. In March 2017, he was named head coach of Fairmont State. He then went on to lead the team to a 22-9 record in his second season and appearance in the 2019 NCAA Division II Tournament where they lost in the first round to Mercyhurst 63,60 in overtime.

A Career with Boston Celtics

He was hired as an assistant coach of the Boston Celtics in June 2019. And then was named interim head coach for the Celtics after Ime Udoka was suspended for the entire 2022-23 season on September 22, 2022.

Joe Muzzulla Salary and Net Worth

His salary s not mentioned on the internet but has a net worth of greater than $5 million.