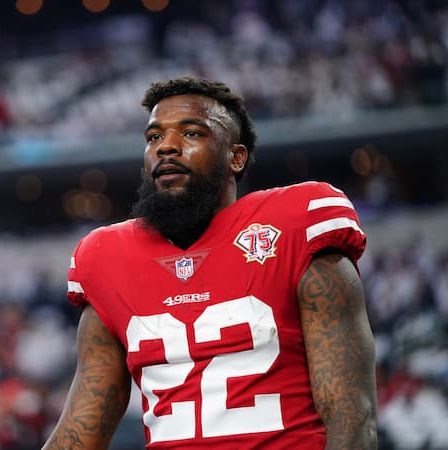 This article will answer every question you have about Jeff Wilson. Below are some of the frequently asked questions about him.

Who is Jeff Wilson?

Jeffery Wilson Jr. abbreviated as Jeff Wilson is a professional American football running back for the Miami Dolphins of the NFL (National Football League). While at college, he played college football at North Texas and went on to sign with the San Francisco 49ers in 2018 as an undrafted free agent.

How Old Is Jeff Wilson?

He is 27 years old as of November 2022, having been born on November 16, 1995, in Palestine, Texas, U.S. Wilson shares his birthdate with celebrities such as; Pete Davidson, Cindy Kimberly, Mason Ramsey, Jaime Adler, Enzo Lopez, and many more.

Who are Jeff Wilson’s Parents and Siblings?

He received his high school education at Elkhart High School where he was named an AP Class 2A first-team all-state as a senior after rushing for 2,749 yards and 36 touchdowns. After high school, he attended the University of North Texas.

During his four-year career at North Texas, he appeared in 41 games (29 starts). And rushed for 3,205 yards and 32 touchdowns on 562 attempts while adding 70 receptions for 527 yards and two touchdowns. Overall, he finished his college career ranked third in rushing touchdowns (32) and fourth in rushing yards (3,205) in school history.

A Career with the San Francisco 49ers

On May 1, 2018, he signed with the San Francisco 49ers as an undrafted free agent. But on September 1, 2018, he was waived and was signed to the practice squad the next day. On November 24, 2018, he was promoted to the active roster. He then made his NFL debut in week 12 in a game against the Tampa Bay Buccaneers. In the game, he had seven carries for 33 rushing yards in the 9-27 loss. Overall, he finished his rookie year with 266 rushing yards and 98 receiving yards.

He was waived by the 49ers on August 31, 2019, and was signed to the practice squad the next day. On September 14, 2019, he was promoted to the active roster. This was after Tevin Coleman was injured in the season opener against the Tampa Bay Buccaneers. In a game against the Cincinnati Bengals in week2, he rushed 10 times for 34 yards and two touchdowns in the 41-17 victory. In the next game, he rushed eight times for 18 yards and two touchdowns in the 24-20 win. He then caught the game-winning touchdown from Jimmy Garoppolo for his first NFL receiving touchdown in a 36-26 win against the Arizona Cardinals in week 11. Overall, he finished his second season with 27 carries for 105 yards and four touchdowns along with three receptions for 34 yards and a touchdown.

He was re-signed by the 49ers on April 20, 2020, to a one-year contract. However, on July 30, 2020, he was placed on the reserve/COVID-19 list by the team but was activated from the list five days later. In a game against the New York Giants in week 3, he recorded 69 yards from scrimmage and two touchdowns (one rushing and one receiving) during the 36-9 win. In week 7, he had 17 carries for 112 rushing yards and three rushing touchdowns in a game against the New England Patriots before leaving the 33-6 win with a high-ankle sprain. On October 31, he was placed on the injured reserve. And was activated on November 28, 2020. He then had 22 carries for a career-high 183 rushing yards and a reception for a 21-yard receiving touchdown in week 16 against the Arizona Cardinals in the 20-12 win.

Jeff Wilson’s Salary and Net Worth