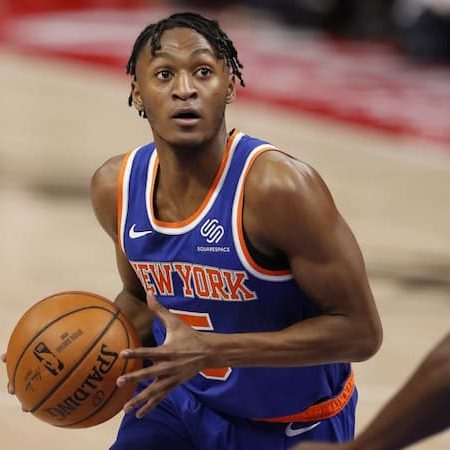 This article will answer every question you have about Immanuel Quickley. Below are some of the frequently asked questions about him.

Who is Immanuel Quickley?

Immanuel Jayken Quickley is a professional American basketball player for the New York Knicks of the NBA (National Basketball Association). While at college, he played college basketball for the Kentucky Wildcats.

How Old Is Immanuel Quickley?

He is 23 years old as of November 2022, having been born on June 17, 1999, in Havre de Grace, Maryland, U.S. Immanuel shares his birthdate with celebrities such as; KJ Apa, Lisa Mantler, Lena Mantler, Kendrick Lamar, Lizzy Capri, and many more.

Who are Immanuel Quickley Parents?

He was born to Marcellous Quickley (Father) and Nitrease Quickly (Mother).

Does Immanuel Quickley have Siblings?

He has two siblings by name Shiloah Quickley and Paris Quickley.

He received his high school education at The John Carrol School Inc. After high school, he attended the University of Kentucky.

He had a breakout sophomore campaign while attending The John Carroll School where he averaged 17.7 points, 3.9 rebounds, 2.9 assists, and 1.5 steals per game. He then sunk a 3-pointer at the buzzer to lead the Patriots to a 51-50 win over Mount Saint Joseph High School and future NBA player Jalen Smith in the Baltimore Catholic League championship. And went on to earn All-Metro Player of the Year recognition. As a junior, he averaged 23.7 points and 7.2 assists per game and was named to the First Team All-Metro.

Coming to his senior year, he shot 44% from behind the arc on the Adidas AAU circuit. After scoring 19 points in a 71-58 loss to Hudson Catholic High School in the HoopHall Class, he was named the MVP of his high school team as a senior. As a senior, he posted 20.8 points, 6.7 rebounds, 6.7 assists, and 3. 7 steals per game and led the team to the Maryland Interscholastic Athletic Association A Conference title. Also, he was named a McDonald’s All-American and went on to participate in the Powerade Jam Fest 3-point shootout.

When considering colleges, he narrowed the selection down to three: Kansas, Kentucky, and Miami on August 23, 2017. Being ranked 22nd prospect by Rivals and 25th by ESPN, on September 22, he committed to Kentucky.

A Career with the New York Knicks (2020 to Present)

He was drafted with the 25th overall pick in the 2020 NBA draft by the Oklahoma City Thunder and was then traded to the New York Knicks on November 20, 2020, as part of a package for the 23rd pick. On November 28, he signed with the Knicks. On December 23, in his NBA debut, he scored five points and exited the game in the second quarter due to injury. He then returned from injury on January 2, 2021, and proceeded to score nine points in the Knicks’ 106-102 win over the Indiana Pacers. He then score a career-high 31 points on January 24, in a 116-112 loss to the Portland Trail Blazers. On April 3, 2022, he recorded his first career triple-double with 20 points, 10 rebounds, and 10 assists in a 118-88 win over the Orlando Magic

In addition to playing basketball at the club level, he also has played basketball internationally. Thus he played for the U.S. national under-19 team in the 2017 FIBA Under-19 Basketball World Cup where he was coached by John Calipari.

Immanuel Quickley Salary and Net Worth