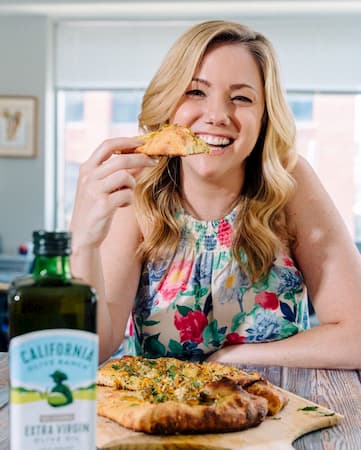 Jaymee Sire is an American television host, sportscaster, and blogger. She has contributed to shows like ‘College Football Live’, ‘NFL Live’, ‘Fantasy Football Now’, and ‘NFL Insiders’ on ESPN.

Sire anchored SportsCenter: AM, the morning installment of the network’s flagship show. The show aired live Monday-Friday from 7 am-10 am ET. It was then announced on July 25, 2017, that she would be the new floor reporter for Iron Chef Showdown.
The show was to air in the 4th quarter of 2017 on Food Network. Sire appeared on season 12,13, and 15 episode 3 of Beat Bobby Flay. He appeared as a judge on Season 13 of Food Network Star with the final four contestants. Sire also runs her food blog, “E is for Eat.”

Sire attended the Edward R. Murrow School of Communication at Washington State University. There, she was a reporter and news anchor for WSU Cable 8 and a member of Kappa Delta sorority. There, she served as president from 2000-2001.

Jaymee produced and hosted A Day in the Life: Tim Lincecum in 2011, also at Comcast SportsNet. She was previously a sports reporter at KFMB-TV (CBS) in San Diego for five years. Sire was a sideline reporter for KFMB’s San Diego Chargers preseason broadcasts from 2005 to 2006. In 2002, she began her career as a news and sports anchor/reporter at KRTV (CBS) in her hometown of Great Falls, MT.

Sire was born to Wendy and Dennis Sire.

There have been speculations that Sire was married to Jeff Keppinger, the president and CEO of Tristar Productions Inc. based in Houston. The two have never talked about their relationship neither have they made any public appearance together.

Jaymee is reportedly in a relationship with Justin Aharoni who happens to be a photographer. Aharoni and Sire first met when she was fired from the ESPN due to the mass layoff back in February 2017. The couple often updates their Instagram accounts with their pictures together. The couple also seem to spend special occasions together.

Jaymee took up a job with ESPN in 2013. On April 11, 2013, Sire made her debut as an anchor for the now-cancelled program, Highlight Express, on ESPNews. On May 5, 2013, Sire made her SportsCenter debut. Jaymee helped launch SportsCenter:AM, the morning installment of the network’s flagship show in February 2016. It aired live Monday-Friday from 7am-10am ET.

Sire also appeared on NFL Live, NFL Insiders, Fantasy Football Now, and College Football Live. For 2013, 2014, and 2015 Little League World Series, she served as a sideline reporter. The tournament aired on ESPN and ABC, as well as some sidelines for the College World Series in 2014. In April 2017, Sire was one of about 100 employees to be laid off at ESPN.

Jaymee made the pivot towards food television following her layoff from ESPN. The show was to air in the 4th quarter of 2017 on Food Network. Sire appeared on season 12,13, and 15 episodes 3 of Beat Bobby Flay. He appeared as a judge on Season 13 of Food Network Star with the final four contestants. It was also announced that she would be the new floor reporter for Iron Chef Showdown.

She is a self-proclaimed foodie and she has her own food blog and also a sandwich named after her, Jaymee Sirewich.

Sire has a stunning physique having her body measurements as follows: