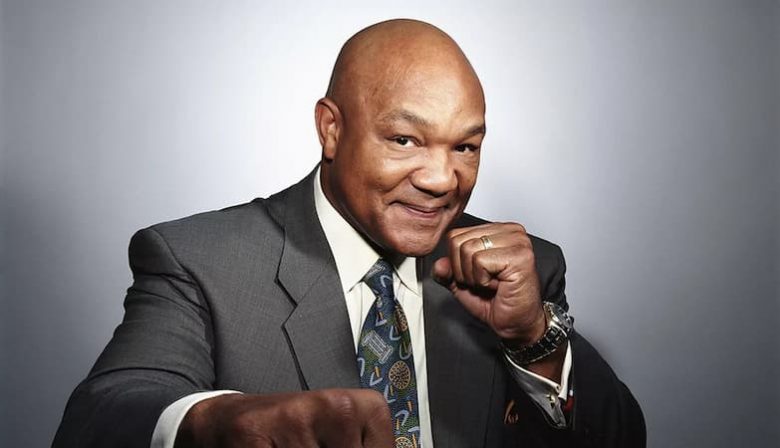 This article will answer every question you have about George Foreman. Below are some of the frequently asked questions about him.

Who is George Foreman?

George Edward Foreman is an American former well-known professional boxer, entrepreneur, minister, and author. In his boxing career, he was nicknamed “Big George” and competed between 1967 and 1997. Moreover, he is a two-time world heavyweight champion and an Olympic gold medalist. And as an entrepreneur, he is known for the George Foreman Grill.

After having a troubled childhood, he opted to take amateur boxing and went on to win a gold medal in the heavyweight division at the 1968 Summer Olympics. The next year having turned professional, he won the world heavyweight title with a stunning second-round knockout of then-undefeated Joe Frazier in 1973. He went on to defend the belt twice before suffering his professional loss to Muhammad Ali in 1974, in the iconic Rumble in the Jungle. Having been unable to secure another title opportunity, he retired in 1977 after a loss to Jimmy Young.

After his retirement from boxing, he then became an ordained Christian minister following what he referred to as a religious epiphany. Later after ten years, he made a comeback, and at the age of 45 in 1994, he won the unified WBA, IBF, and lineal heavyweight championship titles by knocking out 26-year-old Michael Moorer. He then dropped the WBA belt rather than face his mandatory title defense soon after and following a single IBF title defense on June 28, 1995, he relinquished his title – the last major belt he ever held. Thus he became the oldest world heavyweight champion in history as he was 46 years and 169 days old. Moreover, he is the oldest to ever win the world heavyweight boxing championship of major honors and the second-oldest in any weight class after Bernard Hopkins (at light heavyweight).

He retired at the of 48 in 1997 with a final record of 76 wins (68 knockouts) and 5 losses. Furthermore, he has been inducted into the World Boxing Hall of Fame and International Boxing Hall of Fame. Also, he has been regarded as the eighth-greatest heavyweight of all time by the International Boxing Research Organization. In 2002, he was named one of the 25 greatest fighters of the past 80 years by The Ring. For 12 years, he was a ringside analyst for HBO’s boxing coverage until 2004. Besides boxing, he is a successful entrepreneur and is known for his promotion to the George Foreman Grill. The company has sold more than 100 million units worldwide and in 199 he sold the commercial rights to the grill for $138 million.

How Old Is George Foreman?

He is 73 years old as of August 2022, having been born on January 10, 1949, in Marshall, Texas, U.S. George shares his birthdate with celebrities such as; Ben Azelart, Avi Angel, Kobe Morris, Mason Mount, Jadyn Xavier, and many more.

Who are George Foreman’s Parents?

He was born to Leroy Moorehead (Father) and Nancy Foreman (Mother). Moreover, he was raised by J.D. Foreman.

Does George Foreman have Siblings?

He received his education at Wheatley High School but dropped out at the age of 15. But later earned his GED and trained to become a carpenter and bricklayer.

A Career in the 1968 Summer Olympics

At the 1968 Mexico City Olympic Games, he won a gold medal in the boxing/heavyweight division. He proceeded to the finals where he defeated Soviet Union’s Jonas Cepulis; the referee stopped the fight in the second round. After he won the gold medal, he walked around the rind carrying a small U.S. flag and bowing to the crowd.

In 1969, he turned professional with a three-round knockout of Donald Walheim in New York City. Overall in 13 total fights of the year, he won all of them (11 by knockout). He continued his march toward the undisputed heavyweight title in 1970 by winning all 12 of his bouts (11 by knockout). Among the opponents he defeated was Gregorio Peralta whom he decision at Madison Square Garden. Next, he defeated Charlie Polite in four rounds and Boone Kirkman in three. In 1971, he won seven more fights and won all of them by knockout including a rematch with Peralta.

Still undefeated and with an impressive knockout record, in 1972, he was set to challenge undefeated and undisputed World Heavyweight Champion Joe Frazier. Despite George’s size and reach, he was not expected to beat Frazier as he was a 3:1 underdog going into the fight. On January 22, 1973, the Sunshine Showdown took place in Kingston, Jamaica where George dominated the fight to win the championship by TKO. Frazier was knocked down six times by George within two rounds. In his first title defense, he faced Puerto Rican Heavyweight Champion, Jose Roman. Foreman went on to win the bout by only two minutes thus becoming one of the fastest knockouts in a heavyweight championship bout.

A Career Losing the Title

The Rumble in the Jungle: Foreman vs. Ali

His next title defense was against Muhammad Ali on October 30, 1974, in Kinshasa, Zaire. During training in mid-September, Foreman suffered a cut above his eye thus forcing his postponement of the match for a month. In this bout, Foreman was favored as he had crushed undefeated heavyweight champion Joe Frazier and Ken Norton both within two rounds. The fight started and Ali began more aggressively with superior punching speed. For the first time in his career, Foreman was defeated and the title was handed to Ali. Later, Foreman reflected that “it just wasn’t my night” and also claimed that he was drugged by his trainer prior to the bout. And thus he sought a rematch with Ali but was unable to secure one.

During 1975, he remained inactive from boxing. The next year, he announced a comeback and stated his intention of securing a rematch with Ali. His first opponent was to be Ron Lyle. Foreman won the fight by delivering a dozen unanswered blows until Lyle collapsed giving him a KO victory. The fight was thus named by The Ring “The Fight of the Year”.

Next, he faced Frazier for the second time in a rematch. By then, Frazier was the world’s number-three heavyweight per The Ring. At this point, Frazier was 32-3 having lost only to Foreman and Ali twice. Whereas Foreman was 41-1 with his sole defeat at the hands of Ali. Foreman confirmed for the second time as he defeated Frazier in the fifth round.

A Career Retirement and Spiritual Birth

In 1977, he had a life-changing year. After he knocked out Pedro Agosto in four rounds at Pensacola, Florida, he flew to Puerto Rico a day before the fight without giving himself time to acclimatize. Foreman tired during the second half of the fight and suffered a knockdown in round twelve before losing by unanimous decision.

After the fight, he became ill in his dressing room. And he was suffering from exhaustion and heatstroke and stated he had a near-death experience. Though he was not religious, he pleaded with God to help him. He went on to become a born-again Christian thus dedicating his life for the next decade to God. Although he did not formally retire from boxing, he stopped fighting and began as an ordained minister. He preached on street corners before he became the reverend of the Church of the Lord Jesus Christ.

After ten years away from the ring, he made a surprising return in 1987 by announcing a comeback at the age of 38. In his first fight, he went to Sacramento, California where he beat journeyman Steve Zouski by knockout in four rounds. That year, he won four more bouts. While continuing his comeback, by 1989, he had sold his name and face for the advertising of various products selling everything from grills to mufflers on TV. He and Ali later became friends as he followed in Ali’s footsteps in becoming a celebrity outside boxing.

A Career Regaining the Title: Foreman vs. Moorer

Once again, he sought to challenge for the world championship in 1994 after Michael Moorer had beaten Holyfield for the IBF and WBA titles. As he had lost the last fight against Morrison, Foreman was unranked and in no position to demand another title slot. However, his relatively high profile made a title shot against Moorer, 19 years his junior. On November 5, the fight between Foreman and Moorer took place in aLas Vegas, Nevada.

For nine rounds, Moorer easily outboxed him, hitting, and moving away. However, Foreman won the bout and once again became a champion. Because of this win, he broke three records. One, he became the oldest fighter at the age of 45 to ever win a world championship. Second, he broke the record for the fighter with the longest interval between his first and second world championships. Third, the challenger was the largest in any heavyweight boxing championship fight.

A Career as Champion Once Again

Shortly after Moorer’s fight, he began talking about a super fight with Mike Tyson, then the youngest heavyweight champion on record. The WBA demanded that Foreman fight their number-one challenger who at the time was the competent but aging Tony Tucker. Because of reasons not clearly known, Foreman refused to fight tucker and this allowed the WBA to strip him of the belt.

Next, he fought midlevel underdog prospect, Axel Schulz of Germany, on April 22, 1995. This was in defense of his remaining IBF title. Foreman finished the fight with swelling over one year but was awarded a controversial majority decision. Nevertheless, the IBF ordered an immediate rematch to be held in Germany. But Foreman refused the terms and was stripped of his remaining title.

Losing the Tile: Foreman vs. Briggs

Foreman returned to Tokyo in 1996, by scoring an easy win over the unrated Crawford Grimsley by a 12-round decision. The next year, he faced contender Lou Savarese and won in a grueling competitive encounter. Another opportunity came Foreman’s way as the WBC decided to match him against Shannon Briggs in a 1997 “eliminator bout” for the right to face WBC champion, Lennox Lewis. However, Foreman lost the match via a majority decision, but he had dominated the 12 rounds in which Foreman consistently rocked Briggs with power punches. One judge scored the bout 114–114, while the other two judges scored it 117–113 and 116–112 for Briggs. He fought for the last time at the age of 48.

A Second and Final retirement

He announced his “final” retirement short afterward his loss to Briggs. However, he did plan a return bout against Larry Holmes in 1999 scheduled to take place at the Houston Astrodome on pay-per-view. Moreover, the fight was dubbed “The Birthday Bash” due to both fighters’ upcoming birthdays. Foreman was set to make $10 million and Holmes $4 million but negotiations fell through and the fight was canceled. Foreman went on to become a respected boxing analyst for HBO.

George Foreman’s Salary and Net Worth