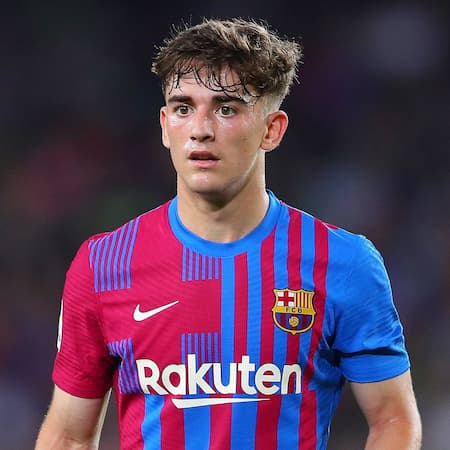 This article will answer every question you have about Gavi. Below are some of the frequently asked questions about him.

Pablo Martin Paez Gavira known as Gavi is a professional well-known Spanish footballer who plays as a central midfielder for La Liga club Barcelona and the Spain national team.

How Old Is Gavi?

He is 18 years old as of October 2022, having been born on August 5, 2004, in Los Palacios y Villafranca, Spain. Gavi shares his birthdate with celebrities such as; Olivia Holt, Yungblud, Bailey Spinnenweber, Neil Armstrong (1930-2012), Karli Reese, and many more.

Who are Gavi’s Parents?

He was born to Pablo Paez (Father) and Gavinin Anasi (Mother).

Does Gavi have Siblings?

He has an elder sister by the name of Aurora Paez Gavira.

News on the internet shows that he is possibly single.

A Career in Barcelona

At the age of 11, he signed for Barcelona in 2015. He then went on to sign his first professional contract with the Catalan club in September 2020 and was promoted directly from the under-16 team to the under-19 team. On February 21, 2021, he made his debut for Barcelona in the 6-0 home routing of L’Hospitalet, coming on as a substitute for Nico Gonzalez in the 77th minute. He made his first start for Barca B on March 14, in a 1-0 derby win against Espanyol B at the Ciutat Esportiva Dani Jarque.

Having been featured twice for Barcelona B in the 2020-21 season, he was then promoted to the senior squad for pre-season friendlies with the first team ahead of the start of the new season. After recording good performances in wins against Gimnastic de Tarragona and Girona, he was reported to have pushed ahead of Riqui Puig in Ronald Koeman’s squad selection. He continued with his good form in a 3-0 win against German opposition VfB Stuttgart, earning comparisons with Barcelona legend Xavi. He then played his first official match for Barcelona’s first team on August 29, 2021, in the 2-1 La Liga win over Getafe, where he replaced Sergi Roberto in the 73rd minute. That same year on December 18, he scored his first goal for the club and provided an assist in the 3-2 home win over Elche.

In addition to playing football at the club level, he also has played internationally. Thus he has represented his native Spain at under-15 and under-16 levels. On September 30, 2021, he received a surprise call-up to the senior Spain national team by the manager Luis Enrique. He made his debut on October 6, in the UEFA Nations League semi-final win against Italy. This made him become the youngest player to ever represent Spain at the senior level. However, Spain ultimately suffered a 2-1 defeat in the final against France on October 10. On June 5, 2022, he scored his first senior goal in the Nations League against the Czech Republic thus becoming the youngest player to ever score representing Spain at the senior level.

Gavi’s Salary and Net Worth

He has a salary of €1 million per season and an estimated net worth of between $1 and $5 million.