By Ephantus Gichuki on Tuesday, February 1, 2022 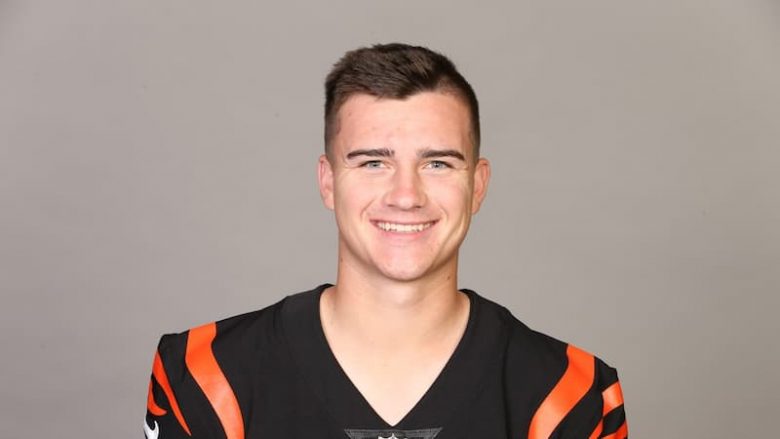 This article will answer every question you have about Evan McPherson. Below are some of the frequently asked questions about him.

Who is Evan McPherson?

Evan McPherson is a famous American professional football player. He plays as a kicker for the Cincinnati Bengals of the National Football League(NFL).

Evan McPherson is 22 years old as of now, having been born on July 21, 1999, in Fort Payne, Alabama USA. He shares his birthday with celebrities including Kaylee Halko, Maggie Lindemann, Robin Williams, Noor Dabash, Romeo Santos, among others.

Who are Evan McPherson’s parents?

Does Evan McPherson have Siblings?

Evan has an elder brother Logan who also played for Fort Payne High School and later went on to play for Louisiana Tech University. Alex is McPherson’s younger brother who played as a kicker with Fort Payne in 2019 and in 2020 Alex played as a punter. He announced his commitment to attend Auburn University in 2021. Currently, Alex is the highest-ranked kicker in the 2022 class.

McPherson attained his high school education at Fort Payne High School. He went ahead and joined the University of Florida to complete his bachelor’s degree.

McPherson is not yet married but he is engaged to Gracie Groat who is an athlete. His fiance is a runner from Fort Payne, a fitness coach, a content creator and she was also an Alumni of Alabama High School. This couple got engaged on 14 July 2021 and have been in a relationship for 7 years.

Evan together with his fiance Gracie has not yet been blessed with a child or children. Once the two will have kids, we shall update here the soonest.

Evan McPherson is a well-known professional American football player. He is currently playing with the Cincinnati Bengals of the National Football League as a kicker. He was born in Fort Payne, Alabama

His football career started at Fort Payne high school in Fort Payne Alabama. He is currently playing with the Cincinnati Bengals. In the fifth round, McPherson was drafted by the Cincinnati Bengals in the fifth round, 149th overall of the 2021 NFL Draft. This made him become the first player from Fort Payne High School ever to play in an NFL regular-season game. On September 12, 2021, McPherson made his first regular-season field goal attempt a 53- yarder against Minnesota Vikings in the season opener. To secure a 27-24 win, McPherson kicked a 33 – yard game-winning field goal, during overtime earning him an AFC special teams player of the week.

McPherson secured his second AFC special teams player of the week by tying an NFL record by making three field goals from over 50 yards in one game, in a 32-13 win over Las Vegas Raiders, going 4/4 on kicks from 54, 53, 51 and 47 yards to secure the win. McPherson broke Horst Muhlmann’s record for most 50- yard field goals made in a season, breaking the old record of 4 set in 1970. With a 58 yard kick against the Denver Broncos, McPherson set the franchise record for the longest field goal for the Bengals on December 19th.

Talking about McPherson’s salary, we want to tell you he is a famous footballer, therefore, his earnings are good. He earns a salary of $955,928 per year and a 4-year contract of $3,823,712. Evan McPherson’s net worth is approximately $4 million as of 2022.