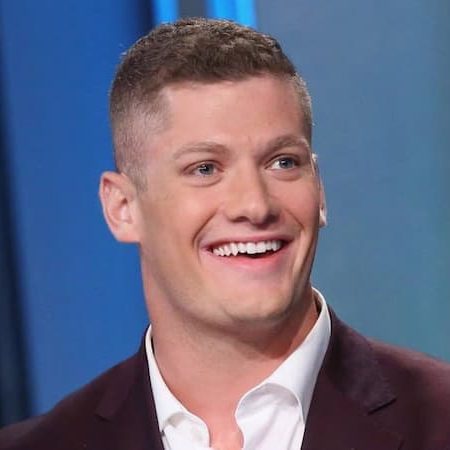 This article will answer every question you have about Carl Nassib. Below are some of the frequently asked questions about him.

Who is Carl Nassib?

Carl Paul Nassib is an American professional eminent football outside linebacker for the Tampa Bay Buccaneers of the NFL (National Football League). While at college, he played college football for the Penn State Nittany Lions thus earning unanimous All-American honors in 2015 as a senior. He was drafted in the 2016 NFL Draft by the Cleveland Browns and has also played for the Tampa Bay Buccaneers and Las Vegas Raiders. In 2021, he became the first active NFL player to come out as gay and to play in a game.

How Old Is Carl Nassib?

He is 29 years old as of August 2022, having been born on April 12, 1993, in West Chester, Pennsylvania, U.S. Nssib shares his birthdate with celebrities such as; Brendon Urie, onlyjayus, True Thompson, PresLee Grace Nelson, Saoirse Ronan, and many more.

Who are Carl Nassib Parents?

He was born to Gilbert Nassib (Father) and played college football at the University of Delaware. And Mary Nassib (Mother).

Does Carl Nassib have Siblings?

He has two brothers by the name, of John Nassib (born on December 10, 1995) and Ryan Naasib (born on March 10, 1990) an American former football player who played as a quarterback in the NFL.

He received his high school education at Malvern Preparatory School. After high school, he enrolled at Pennsylvania State University.

He is openly gay.

He does not have any kids. In case there is new news regarding this matter, we will update it here as soon as possible.

In 2011, he enrolled at Pennsylvania State University and made the Penn State Nittany Lions football team as a walk-on. After not playing his first two years, in 2013, he played in 10 games as a sophomore during coach Bill O’Brien’s second and final season with the team. He recorded 12 tackles and one stack. Nassib went on to appear in all 13 games as a junior and had seven tackles and one sack. For the first time, he became a starter for his senior year in 2015. Overall that year, he reached 10 sacks in only six games.

In 2015, he was named a unanimous All-American and the Big Ten’s Nagurski-Woodson Defensive Player of the Year. Moreover, he won the Hendricks Award for the nation’s top defensive end and was also given the Lombardi Award for being the best college football lineman or linebacker. Also, he was a finalist for several other awards. This included the Bronko Nagurski Trophy, the award given to the best defensive player in the country, along with the Burlsworth Trophy given to the nation’s best player who started their career as a walk-on.

He was selected in the third round of the 2016 NFL draft with the 65th pick by the Cleveland Browns. On June 28, he signed a four-year contract worth about #3.2 million with a signing bonus worth approximately $890,000. In his first professional game, he recorded one sack, three tackles, and one deflected pass. This, therefore, earned him a nomination for Pepsi NFL Rookie of the Week. He played in 14 games as a rookie and in 2017 he became a starter. On September 2, 2018, he was waived by the Browns.

A Career with the Tampa Bay Buccaneers

The Tampa Bay Buccaneers claimed off Nassib on September 3, 2018. In 2018, he set career highs in both sacks (6.5) and tackles for loss (12), both higher than his career totals in both categories going into the season. In the two seasons that he spent with the Buccaneers, he started 17 games and totaled 12.5 sacks.

A Career with the Las Vegas Raiders

On March 27, 2020, he signed a three-year $25 million contract including $16.75 million guaranteed, with the Las Vegas Raiders. In the Raiders 2021 season opener against Baltimore, Nassib strip-sacked Ravens quarterback Lamar Jackson in overtime. This helped the Raiders recover and set up the winning touchdown in a 33-27 win. By playing in the game, he became the first openly gay player in NFL history to play in a game. In week 10 of the 2020 season against the Denver Broncos, he recorded his first career interception in the 37-12 win. Overall, he played in 13 games during the season with 21 tackles and 1½ sacks. On March 17, 2022, he was released by the Raiders in the offseason.

A Career with the Tampa Bay Buccaneers (Second Stint)

Carl Nassib Salary and Net Worth